Waddle, waddle, waddle, it’s Springtime for Hitler and Germany…no, wait, that’s from The Producers, the best pisstake musical ever. After Spamalot. I think. Hey, that’s no ordinary rabbit.

Right-o, no more Percol Americano for me. It’s off to Tamper Coffee to write this excuse for a preview. As you probably know by now, Wet Nuns curated a lil’ festival called Detestival. It was intense (how mental was that Bo Ningen show? And how trippy was Hookworms?). My editor will be doing a review in his usual first-drafter style, so I apologise in advance. He’s Mexican.

We are supposed to be in Spring and it’s been snowing a lot. It feels like Pete Doherty‘s left nostril, really. Still, daylight savings time, Doctor Who and chocolate overdoses are keeping the spirits up. REMEMBER THE DUNKIRK SPIRIT, LIMEYS!

The Polar Dream are a crazy band of vatos locos from Mexico, doing some rather rad music. They’ve hinted they’ll tour Europe. Could they come here, to lil’ old Sheffield? Let’s hope.

Mudcats Blues Trio have decided that doing one ace album last year wasn’t enough, so they are once more back unto the breach (dear friends), with riffs, vibratos, squeals and bourbon fueled songs in the style of proper blues. Shower them with applause (and buy an album, for Krist Novoselic‘s sakes!)

Picardy III is not only the partner in crime of Mr. Seth Woods (aka The Whiskey Priest) in the battle of honest, lovely music, but also a very accomplished musician on his own. He’s got a nifty EP that we love and we can’t recommend it enough.

Wickerbird has released two EPs and both are as beautiful as a Constable painting, with lush colours and emotions.

Little Tybee have their new album, For Distant Viewing, out on the 9th of April. We sure loved it, with its space folky shenanigans!

Gunning for Tamar are back in the fold with another powerful EP, ready to blast into space!

The Black Angels are back with their evil psychedelia-infused sounds. Will they continue our trip to Crazyville? Of course!

Generationals have their album out on Polyvinyl out very, very soon and this excites me. I might be broke but I have my priorities straight: album, then noodles, then lettuce. Result! Gotta respect a band that records on tape (hardcore!)

Cowtown are part of the Audacious Art Experiment, a Pulsar of great music in Sheffield. Riffy, punky and nefariously addictive (just like coffee).

Let’s say we did is a band I personally recommended you Phillistines a couple of centa-hours ago. Lovely pop vocals, lushy sounds and I’m still waiting for my album to arrive (I didn’t bribe customs with crumpets this time, you see).

Blind Architect‘s release is the death rattle of the awesome Lionheart label. Megasadface, but this is a flippin’ awesome way to go, kinda like the end of They Live but in post rock.

Scaramanga Six they have no golden gun, but they certainly have great musical acumen. Fear them, Albini certainly does!

I don’t know about you guys, but 2012 didn’t treat me that well, I wish I could ‘undream a year’ like Valleys did: 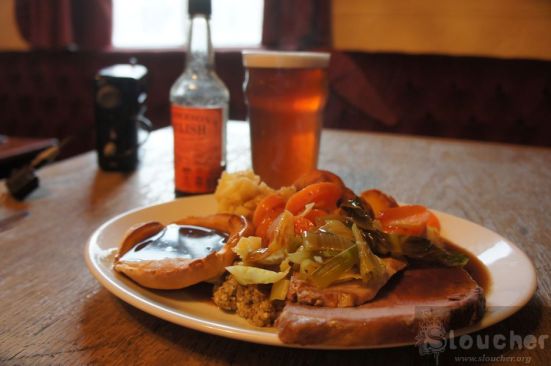 FOOD & DRINK Our usual haunts are:

Tamper Coffee: By jove, try the sultana scones, they are amazing. Get your coffee the proper way, so either go for a tall white or long black.

The Rutland Arms: Still the best Chorizo burger in town. Keep an eye out on Sundays for the cider pig special. If not, fill yourselves with the rather delicatessen style ales on tap. Also, they are celebrating this Tuesday 9th of April (RSVP!) the fact that they got voted Pub of the month by CAMRA.

The Harley: Word on the street is that the Twisted Burger Co. is doing a re-vamp of their burgers, with a monster 5 patty burger, a Bacon juggernaut and an aptly-named La Cabrona. Looking forward to it? We certainly are.

Street Food Chef: We keep dilly-dallying on going for the megaburrito challenge. One day, we will. In the meantime, try the chicken mole one!

Do you like boardgames? We are talking good ones, no Monopoly/Risk stuff that only helps as grounds for divorce. Then come around to The Harlequin for Super Board Games Sunday. Games like The Resistance, Carcassone and Race for the galaxy will be played. Maybe Pathfinder, if y’all stop being cowards. Yes, this is an event of ours. Yes, this is a conflict of interest. I don’t care.April 21st, The Harlequin. Do try the mixed meat Sunday Roast.

Jaws with Tropic of youth + Playlounge at Bungalows and Bears. Terrificly free. Dig in! Presented by Semi Detached.

Wagon Wheel Presents The Lucky Strikes, Neil McSweeney and Quiet Loner at Shakespeare’s (April 5th). This is worth just by Quiet Loner alone! Be early or be square. 6 pounds.

Tribes at The Plug (April 6th). Funky hairdos for a well-oiled machine of great music.

The Scaramanga Six (April 13th) take over the Harley, aided by Xray Horse (in the role of Nick Nack!). Support from Cut your wings and Great Deeds. 4 quid. 8 – 11pm.

Safe@Last charity gig at The Harley (Apr. 17) A good charity for a good cause (young runaways), with music by Carl ‘On fire’ Watkins (he’s awesome), Jack Athey, Yarbo and Every Animal on Earth.

Final thoughts… No real thoughts. See you in May. Gimme a hug.

One thought on “Kvetching in Sheffield – #1”