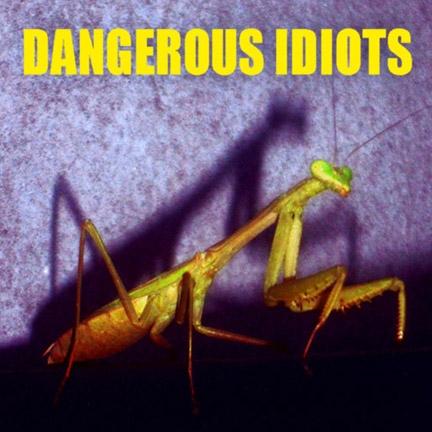 Dangerous Idiots plays a smouldering sound, full of distortion and acid lyrics. It’s the sludgy sound of grunge. The self-depreciation humour filled of nihilism. The disaffection of a generation that had a lot going on but couldn’t be arsed to do it. The overdriven/octaved notes. It sounds like something you could hear squealing from the speakers of your dad’s old beaten car in the 90s (trust me, I was there). Might as well, as this band has Aaron Sarlo, who played before in Techno-squid eats parliament, who had a bit of a hey day back in the 90s. A very short one.

But enough history/navelgazing, we are talking about the here and now and it’s Dangerous Bastards self titled album. Clocking  about half an hour, you’d think it’s part of the grunge revival that seems to be coming around the corner (lumberjack shirt and all) and you could be partially correct.

Why? Because after getting their grungy groove on (‘Less for you’, ‘He who has the information is the leader’), Dangerous Bastards do embark into other genres. ‘Never want to let you go’ is a classy sounds of the 70s AM rock, the type you could use for a long stretch of road in the desert (USA’s route 66, México’s San Luis Potosí highway, your pick).

Still on that desert rock groove, you get the rockabilly light ‘Amerijuana’ (fucking brilliant title too), a catchy rock ditty that, if we continue our desert analogy, could be the soundtrack to your arrival to some small pueblo and getting all those looks ’cause you’re the outsider.

It would be a disservice to ignore the guitar solos, an element sadly lost in a lot of music right now. It’s always a welcome addition when played properly and succinct (no stupid virtuoso solos that bore you to death). Possibly best solo is the one for ‘Crashing jet’, a sludgy gem that’s easily the starting point for this album (hence my choice for the stream).

So, yes, grunge on some tracks, some very cinematic rock on others, with a healthy dose of distortion. The sound is slightly muddy (think lo-fi) but nothing is lost. Lastly, some humorous muscle is being flexed here, with the funny song titles being peddled around, some going into very sarcastic humour (the droning ‘Can I get a role model’, the straight up sneer of ‘Titties’ and it’s reverence to mammary glands) with good rock tunes on par with the title.  Okay, ‘Titties’ is more like a lamentation, they type drunkenly half-sung in the alley of some dive bar after a binge. Then it explodes. Don’t let the title of ‘Titties’ disuade you, it’s a pretty good (and funny) song. At least it made me laugh, in some sort of gallows’ humour way, I guess.

And, in a way, ‘Titties’ represents a lot of what was good of 90s rock: that sense of sarcasm and devil-may-care attitude. Crank up the distortion, chug some piss-warm beer (I recommend Modelo Light, you can’t get lower than that) and just have fun while using music as a catharsis. With the usual gloom and doom of life, music like this can be a good escape valve. It’s music for the disenfranchised teen in all of us, the one writing in yellow notebooks all those things no one will read…