Our previous online editor, Orestes, was killed by the minions of the Angel of the North (true story, I have the video to prove it!), but waaaaaaay before that unfortunate incident (see what I did there? tee hee), he/she/it managed to get an interview with equally dead sock monkey Jonny Sock in the now soon to be deceased The Grapes.

So, the lesson is that Sloucher.org is the equivalent of Death in Family Guy. Please, don’t ask us to interview you or review you, you’ll lose your band and your magic beans (cause I’ll eat them).

Without any further ado, here’s Orestes and Jonny Sock, plushface to sockface.

1) You’ve died a few times and come back to life. What’s your secret?

JS) Gin, bathing in it if possible but just drinking it will help

JS) (Nodding and winking and pointing to his junk) I can neither confirm nor deny said allegation.

Since she has been gone…

3) Is your collaboration with Kanye West coming soon?

JS) Yes, we are painting Katy Perry’s outhouse… should be fun.

4) You’ve usually stiff and unresponsive on live performances – Are you emulating Liam Gallagher?

JS) I prefer the term enigmatic. I don’t move but you can’t take your eyes of me. It’s like Magnum’s moustache. Seriously, watch Magnum P.I. and try not to look at the tache.. it’s impossible).

Stepped on by The Man

5) Is it true what Heat magazine said about you and Jordan?

JS) Yes I am trying to kill her. I did cut her brakes and I booby trapped her library card. The minute the b*tch reads a book she’s a goner.

JS) G, sometimes with T but mostly with more G.

7) We saw a picture of Jenny Sock and Billy Corgan on TMZ.com. Is everything in your love life ok?

JS) Well it cuts deep, but that’s the kind of man she goes for. His junk is woolen, apparently. Who’d a thunk it?

Maybe our reporter exacerbated this…

8) Will you get your revenge on Ronny Sock?

JS) I have surreptitiously arranged for him to become Jordan’s new man. Which is the circle Dante didn’t quite get round to.

JS) Wake up, drink gin, curse the day JLS were born, climb trees, buy gin, cocktail hour (g&t), practice sitting still, stare at picture of Simon Cowell hoping that the power of my monkey mind will have reached such a stage that wherever he is in the world he will suddenly foul himself to death… typical sort of stuff.

Drink gin and carry on.

JS) Hacksaw Jim Duggan. They all said “you do not have the physique to carry off tiny little blue trunks, Hack”, but he went away and did it anyway and became the best, to my knowledge, wood wielding bearded wrestler ever.

12) Is Hobbes from Calvin and Hobbes alive or not?

13) What is the worst moment in modern Rock History?

JS) There’s so many to choose from: the day [Simon] Cowell was born of a jackal, the day Go West split, Peter Andre rising from the grave… they are all up there.

JS) My spoken word tour is in the pipeline. I am also touring Sweden arm-wrestling Bob Dylan for Gordon’s Gin. But that’s more of a holiday thing.

Thanks for your time!

JS) Well done with the Sloucher thing by the way all the words and pictures and stuff. Jolly good.

And that’s all she wrote…some questions remain, but the only important one is: Why does Jonny Sock know who Magnum P.I. is but not Calvin and Hobbes. Silly lil’ Sock Monkey!

Jonny Sock can be seen manhandling the groupies at The Unfortunate Incident. 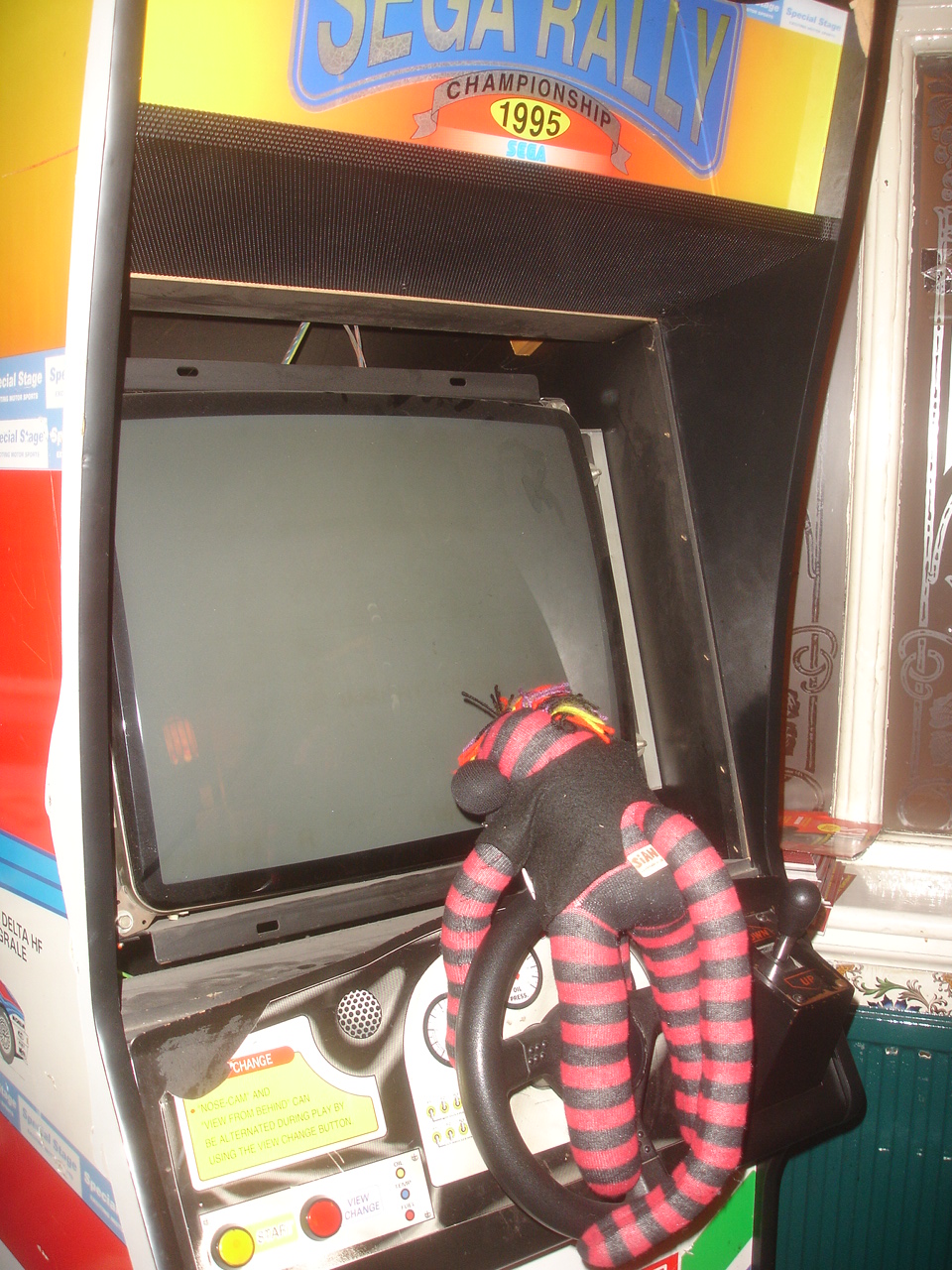 Sports car bought with his royalties

4 thoughts on “An interview with Sheffield’s greatest monkey”