The Payroll Union are a Sheffield band that has been doing the rounds for a while, but it wasn’t until this year when it all started to fall into place. Between an EP launch in a cozy little pub, a stint on the Busker bus during Tramlines and a couple of Hoedowns (one which ended in a massive hay fight), the band is getting loads of good word of mouth.

A meeting with the band was arranged at 2Fly studios.  When I get to the studio, the band are still recording. The song is ‘1826’ and although the basic layout is pretty much finished, they want to add an extra layer of detail to the song. Melodica, a spot of keyboard and even the sound of breaking wood (courtesy of  a 2×4 being destroyed in the studio) are added.

The Payroll Union are Ben (drums, vocals), Paul (bass) and Pete (guitar, main vocals) and they have been recording for the entire weekend. They look slightly tired but happy about how the song is panning out, so we take a stroll around and settle down at a Mexican restaurant to talk about Americana, history and why your influences might not determine how you sound.

For starters, how did you wrangle up this band of rustlers?

Pete: I met Joe Field, who was our banjo player and we started playing together. It was the two of us for a couple of gigs, then Ben came to one at The Fox and Duck and he said: “would you like any drums on that?”. He brought Paul and that was pretty much it! Our first gig was Valentine’s Day, 2009.

Paul: In truth, it was the start of a beautiful romance!

So how did you choose that name, The Payroll Union?

PD: Oh, God…it was a kind of a mixture of things. First, one of my favourite films at the time was called Gun Crazy, which is a brilliant b-movie from the late-40s, sort of a Bonnie and Clyde story. The couple was known as The Payroll Killers as they stole from payroll departments. It also tied with my thoughts at the time, which were focused on employment. I was pondering that as employees, we sell our time, that is my perception of employment. You give them your time and they give you money. I think that tied in somehow. I was also reading a magazine called The Idler, they had this article about being self-employed. So it all ties to jobs. 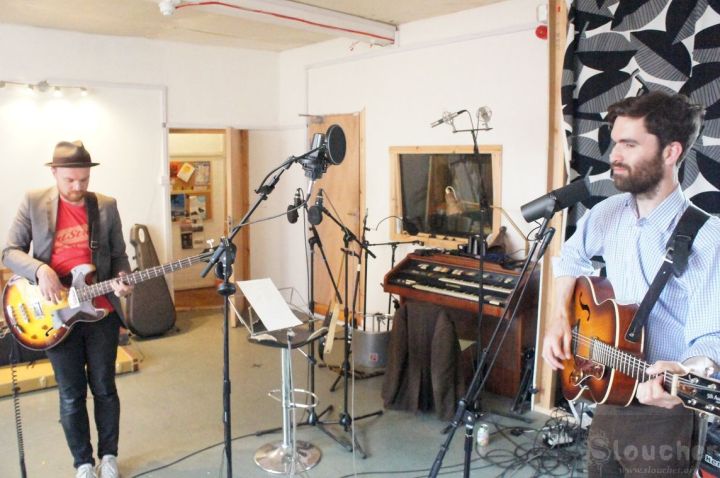 Who writes the lyrics? Is it all you?

Some of the songs feel like history lessons. Does it stem from a love of Americana and oral history?

Pete: I have a fascination with American history. I’m an Americaphile. I love American culture. I know certain writers that delve into historical events but essentially, they just retell the historical event. I’m more interested in fusing two things: the events, letting them be the imagery of the song and picking up characters, bring them back to life and fuse their thoughts with the history, so it has feelings. I don’t really like confessionals, I use to write them but they are boring. People do write good confessionals, but when I write one it might be cathartic for me but it has no purpose for the real world. I like something that has broad appeal and fuse it with interesting imagery, evoke something else.

Now that you mention imagery, ‘Ghosts’ is pretty cinematic.

Pete: The verses are different events, really, but I used Once upon a time in the west as the event. There’s a particular scene where Jill McBain‘s family are being buried in the ground, and it’s so amazing, so sad and so evocative that it inspired the third verse, “Saw their bodies, their eyes closed shut / Buried deep in the hot, red earth.”

How did you feel was the acceptance of Underfed and underpaid, the EP you launched at The White Lion back in April?

Paul: We got some very good reviews, people seemed to like it and they enjoy the songs when we play them live. Releasing an EP gave us a clear idea of how to play live too.

Pete: Recording it did change how we play live.

Ben: The recording experience definitely was a good thing as it taught us how to write songs not only lyrics-wise, but also as proper musical pieces. We went from bashing something out into trying to create a piece with flow. Underfed and Underpaid was a milepost: we did it and now we have to push up again towards the next milepost. Our new EP is the next milepost, so it’s little marks we have to cross in our journey as a band.

Pete: Definitely, we want to keep moving on. I think the first recording was good to see what we wanted to change and what needed to be done in terms of both songwriting, not only for me but as a band. It also taught us how to work.

Paul: It made us play better as a band. We were tighter after that.

Ben: With that EP, it was: Pete brings a song and we played to it. With the new one, we develop the music as a band.

Paul: There’s freedom for everyone to put some ideas around.

Cool. I was wondering about your hoedowns, the For The People gigs you’ve done at Broomhall community centre.

Pete: I was quite excited putting a regular night but not being your typical music promotion event where a couple of bands are put on. I also wanted to have a theme. Make it an actual event that could be enjoyable and people felt they had an enjoyable night, something real special. There are great Americana nights going on but we wanted something different.

Ben: With the hoedown, we have the opportunity to create the whole surroundings that embody the spirit of the gig. Giving away the food of a certain style and stuff like the retro postcards, it would give people the sense of being more involved instead of just being spectators.

Pete: We could give them the feeling into going into another world.

Ben: It’s also a chance to give a band a proper gig instead of just coming in, playing and leaving.

Paul: We have all different influences. I started playing in Indie bands back in Manchester, listened to Stone Roses and that sort of stuff. My fave bass player was Mani. Jon Entwhistle from The Who too! After listening to Indie music, I started getting into stuff like The Beatles, The Who, The Rolling Stones. Rolling Stones are my favourite band.

Pete: I grew up listening to Beatles, Bob Dylan and Neil Young. As a teenager I was into Indie, but on my late teens I got quite obsessed with Dylan, which sprung out into looking into stuff like Gram Parsons, Paul , Gene Clark, Whiskeytown, Wilco… massive fan of Wilco. And then older Bluegrass. I was never in love with it but it was a touchdown I guess.

Ben: In terms of drumming, I have a broad range. I wouldn’t even know their names! But bands like Symmetrical Orchestra, Jeff Buckley, The Walkmen, Dave Matthews Band, early Kings of Leon. I played in Indie bands, some chillout stuff and acoustic stuff too. For this band I just try to do what works best for each song.

Pete: When you first came along, it was always this idea of playing just country songs but it developed, Ben gets to do more interesting stuff.

Ben: I told Pete if he wanted someone to keep the beat and maybe do some brushes, I could do it, whereas now we are a band that writes together, you just don’t keep timing any more.

So tell us about the new EP then, sounds interesting.

Pete: It’s going to be another six track EP, called Your obedient servant. It comes from an Ulysses S. Grant quote. Grant forced to surrender the Confederates in this battle and the Confederate general sent a letter to Grant suggesting the terms of capitulation and Grant sent one back saying “no terms except complete and unconditional surrender” and he signed it off “your obedient servant”. I thought it was just incredible how such a hard-nosed general that would demand complete surrender would sign it like this. It had this incredible sense of grace and manners.

Pete: Yes, for ‘St. Laurence River’ from Underfed and underpaid, we’ll have that one as a free download as we will relaunch the first EP on the new website and then we’ll make a video for one of the new songs, but we don’t know which one. ‘Jake the pistol’, probably.

Now that you mention videos, I like the one for ‘Abigail’ and the question would be: what’s the relationship between the song ‘Abigail’ and ‘The Sacrifice’?

Pete: Essentially the same characters. It’s about Abigail Williams from The Crucible. I try to find out sometimes what happened to some characters after a particular piece of work. So in ‘Abigail’, it’s this character who is back in Salem, lamenting Abigail going to Boston. There are stories that she went and ended up being a prostitute in Boston, so the song laments the loss of her to the big city. ‘The Sacrifice’ is purely about the Salem Witch Trials, from the perspective of a Jamaican slave who lives in the town and the kind of gossip going around John Proctor.

Regarding history and some terrible events like the ones depicted in ‘There’s a light’, do you think music can be a way to create historical awareness?

Pete: I hope so! I like writing about what I’m passionate about and Andrew Jackson and the Trail of Tears, well, that story is one well worth hearing. People don’t know that it was a genocide. Andrew Jackson is one of the most celebrated presidents in the history of the USA, he’s on the 20 dollar bill. He was the real first people’s president. He wasn’t from the Washington Elite or the North-east. He opened the White House to the people but the treatment of Native Americans was outrageous. Back then it wasn’t controversial but there were some people fighting for their course, but it was a minority. The majority had no problem with what he was doing.

That’s pretty much it, would you like to add anything?

Paul: We signed up to a label called Crystal Ship Recordings, with Tim from Bromheads. Dead Sons are there as well. This second EP will be released through that label.

Pete: Very excited about it!

You are in good company! By the way, what did you think about the busker bus? Made me think of Mexico.

Ben: I remember in the Metro in New York you get buskers too, sometimes a whole band playing too.

Pete: I think we should do more busking! We also played outside The Milestone. It was kind of weird, we stood in this street corner, where there aren’t that many people and once the bus stopped, we played for them while there was another band on the bus. So they stopped, we played a couple of songs and then they went back into the bus. A bit surreal.

Paul: The thing about the Busker’s bus and all that Tramlines thing is that it’s something different and you don’t get to do it often, it’s an unusual experience for people to experience.

Any future Hoedowns for the future?

Pete: Not in the immediate future, but yes, we plan to do more.

Thank you very much

We’d like to thank The Payroll Union, Crystal Ship Records and Alan Smyth @ 2Fly for this interview.