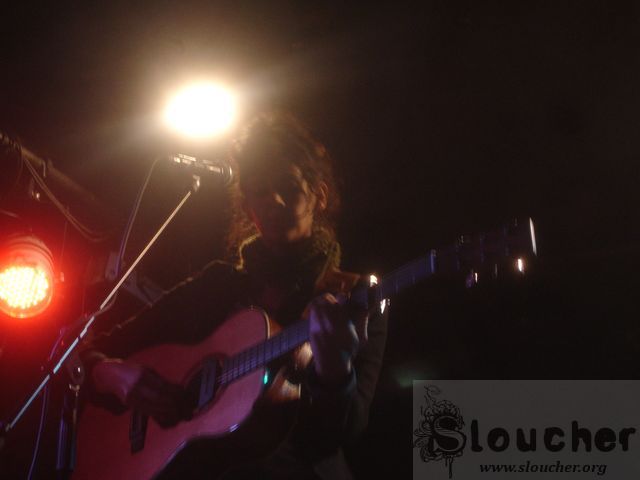 Picture this: A cold Monday night in Manchester in a half filled Night and Day Café. 4 acts with no rhythm sections (at least, not conventional ones) and a looming harsh winter season. Such was the stage for a night of calm music.

Opening duties were carried out solemnly by Chi Limpiroj, with her introverted songs and her soothing voice filling the Night and Day Café. This sober atmosphere, not quiet in a boring way but in a respectful way was going to be the pattern for the night. Never heard any of her songs before, but they sounded good ( I think she played ‘Dear autumn’) and there was a warm reception from the audience.

Jay Leighton’s stuff seemed to be centred about longing. Whether for a significant other or to soar a little higher (there was a song about Icarus, I think), it sounded like his stuff was more about retrospection, need and star-crossed lovers. There was less finger picking and more chord based stuff on his set, a nice change of pace. A little peppier than Chi Limpiroj, but still calm, moody music.

Les Shelleys do happy music. That’s them in a nutshell. Like a campfire singalong, with Tom Brosseau (guitars, vocals) and Angela Correa (vocals, human drum machine) singing almost in sync, delivering a layered style that’s quite cool and hooky.

When a slight audio malfunction seemed to slow their frantic, sweet pace, they decided to use the intimate atmosphere at the Night and Day Café to their advantage and mingle with the public, playing and moving around them. Great interaction with the audience! They also played some good covers of Burt Bacharach, Frank Sinatra (‘something stupid’!) and Elvis (of course!). They also played my fave song by them, ‘Rum & Coca Cola’.

Then it was the piece de resistance: Gregory and the Hawk. Even though she’s been working with a band in her latest recordings, tonight was going to be an intimate affair. Only her and her guitar (or the harp for two beautiful songs).

It’s hard, real hard to describe how she exactly sounds live. The feeling from the albums is there, yes, but there’s an extra aura, again, a feeling of solemnity that oozes through her voice and the sometimes sparse instrumentation. She thanked the public a few times, but she seems to be the type of artist that lets the music say everything.

I really can’t say which songs were played due to how otherworldly was the atmosphere. It sounds like an excuse (which, in a way, it is) but it’s also the sort of ambient you get from the music of Gregory and the Hawk. You get an indescribable mood, like being mesmerised, and although her set was lengthy, it felt like minutes.

4 acoustic artists. All with different styles but still able to recreate a very intimate atmosphere worthy of a trip to a cold Monday in Manchester. You all take a bow, you were acoustic but were as loud as any fuzzy guitar I’ve heard.

Gregory and the Hawk

One thought on “A quiet affair”