What should a good album cover do? It should encapsulate the tone and general sound of an album, or at the very least, give the listener a good indication of what to expect. Swedish singer-songwriter Lykke Li’s latest LP I Never Learn has a perfectly-pitched front sleeve. 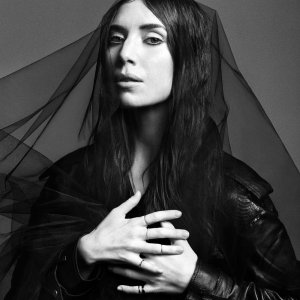 The black and white photograph sees her dressed in leather with a funeral-esque shawl draped over her dark hair. It sets a somewhat dark and desolate tone, which is appropriate considering the nine songs that fill out this record see Li explore troubles of the heart. The brightness of her face suggests the presence of light to contrast the darkness, Furthermore, it’s also quite a minimal cover, working excellently alongside tracks like ‘Love Me Like I’m Not Made of Stone’ with its simplicity and heartfelt vocal delivery, baring a fleeting resemblance to Oscar Isaac’s heart-wrenching rendition of ‘The Death of Queen Jane’.

Like all of Li’s albums, I Never Learn opens strongly, with the acoustic guitar led title track, which ushers in strings halfway through that don’t overwhelm, but instead complement. All-too-brief, it is followed by lead single ‘No Rest for the Wicked’. Driven by twinkling piano, it builds to a beautifully melancholic chorus. At the centre of the album is ‘Gunshot’, a track which opens starkly with Li crying out “I am longing for your poison”, while being backed by minimal instrumentation, before exploding brilliantly and briefly as it rockets towards one of the record’s best choruses and ultimately, finest moments. ‘Sleeping Alone’ concludes proceedings on a satisfyingly optimistic note.

If there were any concerns that Li would go down a more mainstream path after the massive success of ‘I Follow Rivers’, they are quashed with I Never Learn. It sees her taking her personal heartache and transforming it through a darkly romanticised lens to craft a mature, sincere and sorrowful album that is affectingly emotional and oddly life-affirming. It’s as if she is painting a typically chilly Scandinavian landscape full of dark woodlands and snowy fields, but has decided to inject the suggestion of sunlight, representing the wistful optimism that is underpinned throughout the album. Additionally, it is effectively compact, at little over 32 minutes and the production by long-time collaborator Björn Yttling (of Peter, Björn and John) is superb, adding texture to the songs.

Lykke Li is still venturing down a fiercely singular road and with three albums impressively distinguishable from each other under her belt, she has carved out a career as one of the most compelling female solo musicians around today.

Watch the video for ‘I Never Learn’ below: