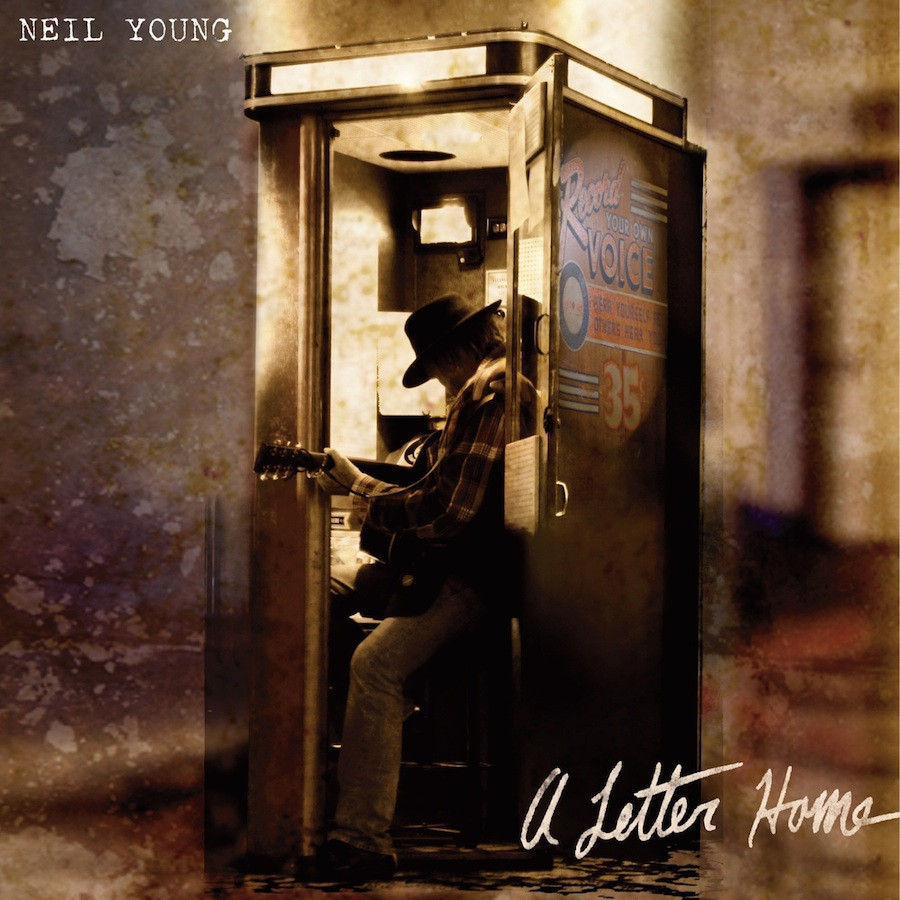 Young‘s journey through obscurity has been well-documented throughout his career, but was perhaps best narrated in 2012’s autobiography Waging Heavy Peace. The autobiography departed from the usual sob-story format of many celebrities and stars and instead appeared as a stream of consciousness, reflecting on musical and non-musical interests, dreams, hopes, fears, and some reflections to love and loss.

Punctuating the book were references to new projects and pursuits, one being Young‘s previous album Psychadelic Pill which acted upon release as a companion to the book. Now with A Letter Home, there is seemingly an epilogue to this strange, colourful book-music story.

Recorded in Jack White‘s 1947 Voice-o-Graph instant vinyl recorder – a sort of photo booth where you can record songs directly to vinyl – the sound quality of A Letter Home is another move to obscurity from Young. The guitar is distorted, not by choice, but due to awful microphonic recording. The vocals are similar and the entire soundscape waivers, quivers and flutters in and out of tune, giving a similar effect to those times you would watch an old VHS tape which has been played once too often.

This throwback to yesteryear is charming at first but, from the halfway point, it becomes rather irritating. Young‘s 37th studio album – an album of covers no less – certainly gives a unique renovation to some of the best, if perhaps lesser played, country and folk songs. Yet throughout, there is a yearning for Neil to stop the intentional recording aloofness and just record the songs well, rather than differently.

At 12 songs in length, the album is strong in terms of song selection, albeit perhaps a little short. The first eight songs are by far the strongest (though this count ignores the first song which is merely Young reading an old letter to his mum, which is the lowest point of the album). Willie Nelson‘s ‘Crazy’and ‘On The Road Again’receive a decent, thoughtful reworking, the latter even starring Jack White; Gordon Lightfoot gets two mentions on the album too which the chirpy ‘Early Morning Rain’ and the sublime ‘If You Could Read My Mind’.

The highlight of the album is undoubtedly Bert Jansch‘s ‘Needle of Death’, which audibly effected Young‘s songwriting thereafter, particularly the song ‘Ambulance Blues’. Young languidly ambles through the tale of a heroin death with such sensitivity, such pain, and such conviction. This song, on its own, is enough to recommend the album.

However, this album is not one for the casual fan. For those who can withstand Young‘s eccentricities, this album is just superb. But for the casual listener, perhaps miss this one out. The intentionally awful sound recording is irritating, the songs become samey (I could not even recall the Springsteen covers on the album), and it all feels a little lazy. With that said, if this album was recorded in a decent, clean solo acoustic setting, this album would be among Neil‘s best.

So I shall leave the last word to the reaction of a friend who joined me in listening to a few songs. After sitting contemplating for a while, he raised his hand gently and said: “The album seems good. But is there something wrong with your speakers? It sounds like I am underwater.”

That pretty much sums it up.

‘If You Could Read My Mind’

‘Since I Met You Baby’

One thought on “Review: Neil Young – A Letter Home”

Payday treats. #tarkovsky #solaris #criterioncollection and #tombaker on Blu-ray. #doctorwho
Chilly morning view from the office.
A tea tragedy. #yorkshiretea
I might not like Mondays, but this view is worth the drive. #nature #forest
After finally getting around to watch #thelighthouse I'mma chasing it down with this classic #tombaker #doctorwho episode. Based on the disappearance of the staff at the Flannan isles lighthouse, it's a tense whodunnit with a shapeshifter that looks like a dumpling gone mouldy.
The best. #happyspizza
#crows #birdsofinstagram
Morning. #latergram
Low #moon #blueskies