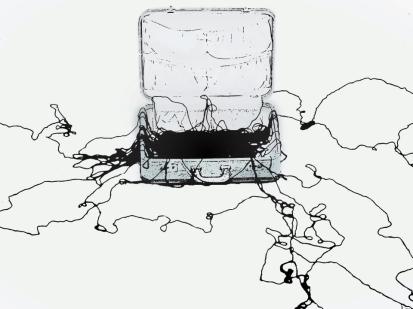 El Loco. El Solitario. El Enamorado. El Viajero. Four parts. Four EPs where the mournful emotions of a saxophone are closely guarded by the swoon-inducing voices of equal-minded individuals whose only goal is to tell a story. A story of emotions that are deeply embedded in our hearts.

This is the last stop, the terminus. Where The Jonathan Arellano Project finishes one part of their trip and it’s was a no-brainer to name this EP El Viajero (The Traveller). As with the previous parts, there are four songs, all jazzy by nature, but with the eternal freedom that the genre provides, the room for experimentation is ample, prone to flashes of prog, fusion rock and even hip hop.

‘El Viajero’ starts slowly, building up a reputation with a steady rhythm on the hi hats. After the build up stops, we get a soliloquy by sax man Jonathan Arellano, doing a voiceover stream-of-consciousness, name dropping the previous EPs as parts of a psyche. “Una parte de mí la dejo en cada canción“ is the final sentence, an acceptance that all songs are imprinted by the creator. A longing female voice finishes the track which segues into ‘El viaje’, where, in classic Jonathan Arellano Project, we get a change of genre. Drum n bass with a steady flow rap (by Eric El Niño) continues the stream-of-consciousness delivery. Ace!

Even if ‘El Mundo’ is slower than the previous, manic d&b track, there’s a feeling of desperation between the female voice  (Citlalli Toledo) and the ever rising sax tones. “En esta toda vida todo gira, todo tiene un inicio y un final”. “In this life, everything turns, everything has a beginning and an ending”. The layers overlap, the voices overlap and the climax is followed by a piano that slowly stops and fades away. Chilling.

Then we get the piece de resistance: ‘La rueda de la fortuna’ (The wheel of fortune). A 7 minute jam that builds up for the best part of 3 minutes, as if it were laying the foundations of a building. Then the construction crew comes around, puts a few flower crosses and starts a banging happening. A drum solo govern the middle and then everybody else comes out to play. Lovely acoustic guitar riffs, a solid overdriven guitar that soundtracks the seedy nights of a hellish, unforgiving city like Mexico City (¡ciudad de los palacios!) and suddenly, between the grit of the music, we come to a standstill, everything goes dark and that smooth jazz has its own soliloquy, bidding goodbye. What happens later, only time will tell.

You can download this EP (as all the others) free from The Jonathan Arellano Project soundcloud page.