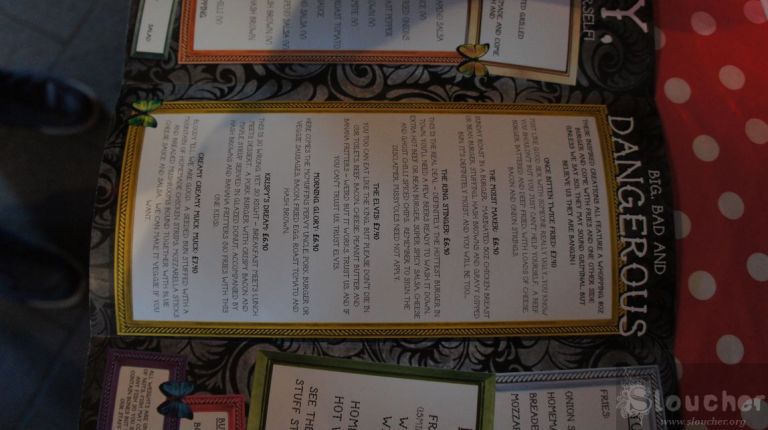 It seems that we’ve taken a turn as of late. Besides the usual music and art shenanigans, several stories about alcohol have been creeping in. Maybe it was because of this or simply because they took pity on us being skint, but we got invited to a Press launch for the new range of Burgers the Harley is offering (via Twisted Burger Company).

After being offered a few flutes of champagne (the rump steak of drinks), four hamburgers were offered for the pack o’hungry hungry hippo journos (TM) that were starting to look peckish. The four burgers that were offered were:

A quick chat was had with the other people writing. Idle chit chat, confusion about the ownership of the cutlery and a few business cards being traded like baseball cards was the order of the moment. A quick gander of the burger menu was quite informative: there were a couple more of special burgers there (including one named after Elvis Presley) and you could also go for something less insane and build your own from a variety of elements, rendering a number of permutations that I couldn’t be bothered to do. Not that I’m bad at maths, I just simple wasn’t bothered to do so.

After having those tasters, we were told there was going to be a heat of “Man vs. Burger” (which sounds like a song Cobra-Fist should totally do). The contest would be downing a rather spicy burger with white-hot chips. I think the burger was called the Ring of fire (actually it’s The Ring Stinger, but let me digress), although I would settle renaming it Firestarter or Cry one more time. Oh, well, Prodigy and Gram Parsons aren’t a match to The Man in Black, I guess.

Now, this is where things get a little sketchy. The curly haired woman sitting besides me asks me if my strategy is to eat real fast or taking it nice and easy. I tell her that I’ll go slow as I’m prone to choking on food (God/Jebus/Dawkins bless you, Heimlich). This would prove to be my downfall, as she basically was like a woman on a lifeboat on the Titanic telling the people on third class not to worry, that they had gills and would be a-ok.

Curse her! And then she is yanked out of the contest as a contingent of Forge Press’ finest arrives and one of them was the volunteer for their team. Then a woman in a nifty vintage dress warned us that the plates should be clean or we would be taken to the bloke’s room after a gig and be forced to clean it with a toothbrush. Fair warning. We start eating and I coyly try one of the chips. As suspected, they were dipped on something resembling ground cayenne pepper and depleted uranium (pretty sure about the second one). The burger is spicy and I for one lament that I’m on that group (roughly 8%) of Mexicans that don’t eat any spicy food at all.

Flavour was good. You could start feeling some numbing around halfway of the contest and I bet my ring finger that it was more due to the chilli powder guarding the chips than the vast array of natural chillis playing rubgy on the beef patty.

It then dawned on me that this was a speed contest. Oh, well, never mind, the burger was fine, but left most of the chips, which then were passed around for the bystanders to try (and suffer). Yeah, that’s right, tastebuds were being immolated in front of you and you did nothing! Chilli is an unforgiving, vengeful God and that day, it went Old Testament on us!

Finished last, as expected. A highly regarded music producer/studio owner had betted on me and I had lost him money. The reputation of my country was in shambles (and you thought it was because of the war on drugs?). Still, a certificate was given for my poor effort and I escaped by one of the back doors of The Harley, the same one NDubz used that one time they tried to sneak in.

So, there you go, there are some good burgers waiting for ya at The Harley, that’s one less American dish to miss. Now, if only someone could get a Hot Dog right…

Words: Sam “2 pints of milk and a lolli sorted me out” Valdés López

One thought on “Wild times with burgers at The Harley…”