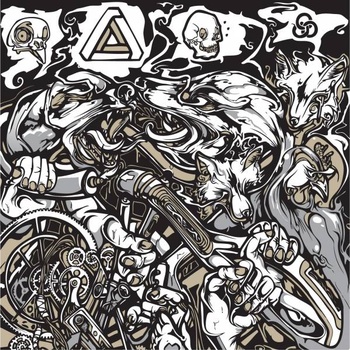 After a buzzing sound, the unleashed anger of Alright the Captain kicks you a few moments on the head. It checks your pulse and then kicks you again. ‘Rostov could get it’ is the sweet jackhammer to your head, a hell of an album opener. But that’s the way SNIB starts. This brand of Math Rock goes for some serious business (tinges of rock and prog here and there, but never deviating from their soul).

‘Neo Tokyo’ is where the band goes into those proggy little figures I mentioned before. (although they never seem to let their hand go). The music doesn’t meander for too long, my main nitpick with prog rock, as the pace is kept very brisk, with some moments feeling like a duelling banjos contest between bass, drums and guitar. One lays down a series of riffs (or beats) and the next one responds. The one bit by the end (you can hear it in the stream) is probably my fave bit of the track: heavy and with attitude.

Attitude, sort of. More like a swagger thing. You see, there is a lot of aggression, but, in the words of a friend of mine, it’s “friendly aggression”. There is a style to the angry notes floating around, a certain extra layer of classiness that the electronic elements give to these chaotic rambles. Check ‘Pay off’ and it’s soothing, sweet ending. Watch out for the next track, though, ‘Peanut worm’ has Alright the Captain remembering where the fucking distortion pedal was.

‘Soundtrack you’ = BRUTAL. It’s the insane combination of a fuzzy distortion (I think it’s a bass) and a very thick reverb (spring setting) being juxtaposed with each other. It shouldn’t work, but if weird stuff is up your alley, this is a great starting point.

Another equally brutal song is ‘Honey badger’. After shouting the name a few times, the pace is manic and all over the place, then it mellows out into a still aggressive but slower march. Love the fuzzy bass at the ending.

And, really, the song is just a pre-amble to the great album closer ‘Clamp’. Wouldn’t go to say that it’s reusing the best ideas in SNIB (which there are plenty), but it feels like a good culmination of several threads that had been laid down in previous tracks (like the awesome ‘#33’).

Just when you check that SNIB will let you catch your breath, it keeps beating your head senseless. These three lads won’t stop ’til you go mental and follow their every odd-timed command.

As usual, there’s the need to say something that could counter the verbose diatribe that is being typed as a review and although it’s more of a nitpick than anything else, it has to be said: if you are not a fan of math rock or post rock, this won’t convert you to the genre. You need to be a convert to fully go for this album on one go.

Least you be wary of what sounds as some manic music (it is) and you want to dip your toe first, please, listen to the songs completely and not by snippets (no Amazon, really). If you only listen to a 30 second snippet, you’re missing the point in these types of tracks.

Their chamaeleonic nature means that songs should be treated as complete monsters and albums as full experiences. And SNIB is a chaotic (in a good way) experience, leaving you dizzy and hopefully with an urge to re-experience what you just heard to find out if what you felt is still there (it was for me).

But don’t take it from me, what do you think? Here’s the stream from SNIB at their bandcamp. You can find more about Alright the Captain in the links section.

Dad's rocks put to good use
Its been a long day
Melting hearts.
This week's #mic #decorations #colinbaker #legojoker and #stalker
#avedeparaiso #flowerstagram
"HEY WHAT explores rugged soundscapes of doom and salvation, intertwined into a brash performance that terrifies and soothes." My review of @lowtheband For @nowthenmag
Loading Comments...