First time we heard about Bromheads was due to one of our writer’s watching their slightly chaotic show in DQ during Tramlines 2009. Since said writer (name rhymes with Spam) is a big fan of the band, we managed to get a quick interview with Tim (guitar, voice) and Dan (drums), who were kind enough to take all the questions we sent their way.

Right, who wants to speak about the name of the band?

Tim: That’s the third time we had that one today!

Dan: We used to make stories, like a hamster’s name or tramps.

Tim: His character is called Gonville Bromhead, there ya go! Nothing to do with a jacket, that’s why we got rid of it. We just saw an opportunity. 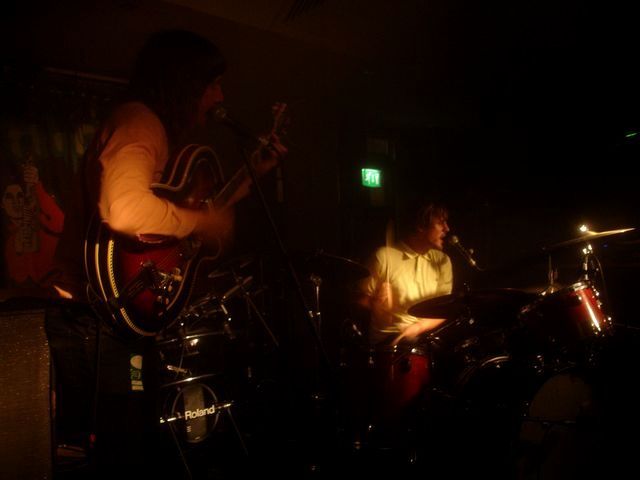 Cool! So, you were “Bromheads Jacket” before, you decided to drop the “Jacket” part. Has this carried any baggage with the band, because of the brand?

Tim: It’s nothing major, really. We try to explain to people that we are a different band, but it’s needed less and less now. Also, fans used to came to gigs and expected the sort of old hits and now we’re playing new songs.

Tim: We took the opportunity to have a bit of break and move forward. We had a think of what do we want to do and it’s been good. Because we were away for a bit, people knew that it was a clean break and a change of the name, so not much baggage, really.

Cool, because sometimes fans can be a little clingy: you change a little bit and they go “argh!”

Dan: Some fans liked the aggressive punk sound from the first album [Dits from the commuter belt] and then on the second album [On the brain] we had some more chilled out moments and more inspired by Rock and Roll, we lost a few, but gained a few more.

On that subject, on your sound, back on Dits on the commuter belt, you were punkish and On the brain was much more mellow, so what were the influences that made you move into your current garage style?

Tim: I think we were at the punk stage and he [Dan] saw an interview with Iggy Pop in Mojo, talking about the old bands he heard as a kid and inspired him. Stuff like The Doors and Link Wray, and he also went back and talk about Rock and Roll stuff like The Seeds and The Sonics. Then he talked about garage: the West Coast, 60’s sound inspired by the British invasion. That sort of thing, really, learning about that, well, we were inspired by that sound. It also comes down to DIY. These guys were recording in their garages, doing it themselves, releasing their own singles and we are chasing that back again. We’ve been listening to Chuck Berry, The Sonics and their Rock and Roll covers and also the whole Rock and Roll movement from the late fifties.

I’ve got a question from a friend. She’s a drummer, she’s from Mexico and she likes your drumming style and wonders about your influences? 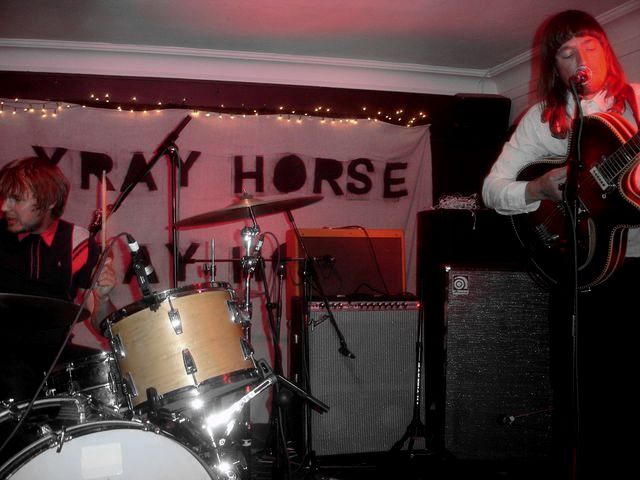 Looking back at how hectic was 2010 for you guys, with trips to the continent, the free singles, opening for the Pixies and Tramlines, how do you feel you’ve done so far?

Tim: It was really good! Considering we have been releasing these singles by ourselves, with no label, through our website and all, well, it’s been good. Considering we haven’t had any physical release for each one. They are singles, but they are not being blasted to death, no paid a press person nor trying to push them into the radio. We got all those things because people like yourself picked them up, enjoyed them and decided to follow, so, yeah, we haven’t been selling stadiums but it’s been really good. We enjoyed the Pixies gig, which came out of the blue, same with the Germany castle.. I liked the Germany thing.

Dan: We were in the second biggest castle of Germany, in a festival. It’s been really fun to do random things like that: going out and realise you have a gig in a castle. Then things like The Pixies, which was a complete, proper honour for us, a massive influence.

Do you have any particular gig from 2010?

Tim: I really liked the Library Theatre gig in Sheffield. That was really cool!

Dan: Yeah, that one was a keeper.

What’s the deal with the new album?

Tim: We’re nearly there, a couple of more songs and we’ve just been really brutal with it, taking longer with it. We went through a phase like, we wrote ten songs in two weeks, it was really intense, being writing, writing, writing. Not good enough, stick it into a bin, you know what I mean? Do another one. Which we never pushed ourselves to be before in the past. It’s sounding really good, we’re really excited about it. We got a local producer, a guy called Ross, we are quite excited about it. He’s asked us to do it. We’re excited. We’re looking forward to having it done. It’s been set back a bit from when we planned it, but we were going to record it ourselves.

Dan: We probably feel more comfortable about this next album than the previous two, just because we’ve been to that process, being really brutal. It might have been a good song but if it doesn’t work, it goes in the bin. We’re really excited about this one.

From your 12 free singles, do you have any particular favourite?

Tim: Good question! I can’t remember what they all were!

Dan: ‘Blinkers on’. I like to play that one.

CD sales are going down, vinyl is kinda surfacing, but singles are doing quite well right now, do you think the album experience is dead?

Tim: It has a lot to do with technology, isn’t it? It increases all the options available. You don’t have to have the album, you can just pick out the songs you like. You can listen to them before you download them. That has definitely taken away from the experience of the album, and when you’re a bit lazy, you skip tracks. You could do it before, but people had no choice but to buy the album. I’m old school, so I do listen to all. Now, they just stick them in the computer. Of course it has changed, and us as writers had to change with this. We had to take it into consideration and we’re now more strict with what we write. So we had to write it like it’s ten singles.

Dan: But it means you have ten very good songs.

Tim: It’ll probably come back in a few years. It’s not what it was, but I think it has always been like that, but people couldn’t do it in the past. There are still people who want to listen to an album from start to finish and still buy one.

That’s pretty much it, thanks!

One thought on “Interview – Bromheads”