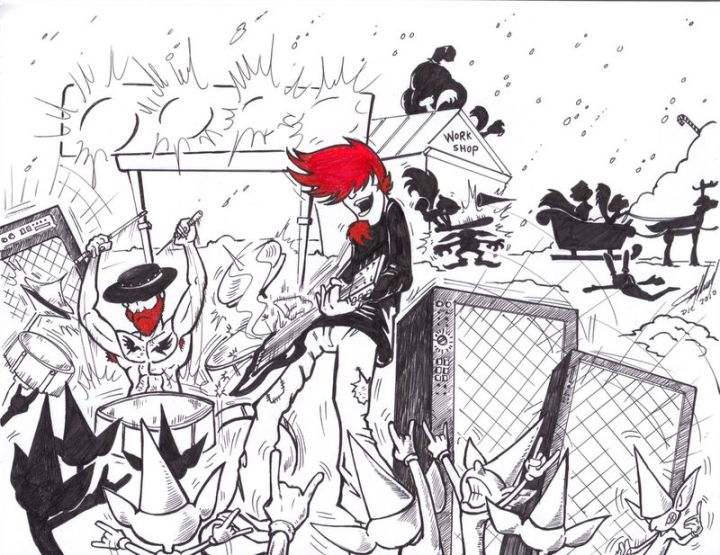 It’s a calm afternoon in a dreary upscale cahootin’ pub in Ranmoor. The clientele is well dressed in penny loafers and shiny suits, with dogs in diamond-studded leashes. The only normal looking fellas are a pair of honest-to-God Sheffield Death Blues rockers. They are Terence Trent D’barndance (guee-tahr, screams) and Wired Earp (drums, sexy torso) and they make music by the name of Wet Nuns. After some sexy drinks, we talk for a while…

You’se got a fancy pants name, how you got it?

Terence: We had a big list of band names, ‘cuz that’s what we do, we turn everything into a band name.

Terence: That would be a good band name! Wet Nuns was one of the best ones. So before we even started playing any music, we decided we were going to be called Wet Nuns. That’s why it doesn’t relate to the music .

Wired: The original concept was to play grindcore music and wear nothin’ but nun habits. With turned up crosses in our chests, some leather pants, but that fell through, ’cause we can’t afford that dressy type of thing.

Can we blame the Credit Crunch for your change of genre and disguises?

Terence: Everything about us is budget, including our music.

Wired: It’s true. His guitar is from the skip, my drum kit is second hand and it’s falling apart. We scrape by with anything we can. And I think it sounds better for it.

How did you two good ol’ boys get together?

They look at each other suspiciously.

Terence: We was in this show called “Band Date” and we could re-enact it for you, if you want… “What’s your name? Where you come from?”

Wired: “My name is Earp, I come from Sheffield in Alabama.

Wired: “That means you are number 2!”

Wired: “Number 2, if we were in a band together, what would be the style of hair for the shows?”

Terence: “Mainly in my head and my face, that is the style I go for. What about you? Can I throw that one back at cha?”

Wired: “Fortunately, I can’t say the same. I only have hair in my face and in my back, not on top of my head! I think I want to be in a band with you, number 2!”

Terence: “We could be the hairiest band in Sheffield, Alabama!” And so we got together.

You went to scary London town, how did people react to your music?

Wired: And pukin’ it! But they came to see a much popular band and we blew them away. Although when he went to do his crowd surfin’ bit, on a guitar solo, it was like Moses partin’ the Red Sea!

Terence: No one caught me ! I didn’t jump, I slipped on a puddle of beer and landed on my ass and realised there was a very large space around and so I went crawling to find some people to make contact with and they all walked away.

Wired: You was rabbit.

Terence: I was rabbit.

After the gig, did any pastor or religious figure try to confer with you about your evil ways?

Terence: We didn’t get none of that. But two Australian people hassled us quite a bit, but we liked that.

Wired: They was waitin’ outside for us, gave us 20 dollars for two cds.

Terence: That’s a lot of money where we coming from. We could buy numerous musical instruments, not from the skips.

What would be your musical influences and heroes?

Wired: What’s her name of that young lady that sung “Since u been gone”? Kelly Clarkson.

Terence: That means “kill everyone” in my country. Com-buy-nation!

Since you are from that faraway land called Sheffield, Alabama, what’s the response you’ve got from the seven hillbillies in Sheffield?

Wired: Not much difference, same people. There aren’t many hillbillies, we might be the only ones left.

Terence: I don’t know. That pretty much summed it up.

What about the rest of the public in Sheffield? What’s the response?

Wired: They seem to like us, I don’t know why. We started as a joke and still are a bit of a joke. We’re just havin’ fun. Guess that’s why they like us.

Terence: Most of the people that like us now are in bands too. Somebody said that we were Sheffield’s bands favourite band. Which is a nice compliment to have but we would like other friends too.

Terence: Not trying to make anything, but fun of ourselves, essentially. That’s all.

Terence: Tons. Lot of them. There’s a lot of bands we don’t like but there’s more that we do.

Terence: I think that people are reluctant to form a scene or give it a tittle because what happened the last time there was a Sheffield music scene, some people came and blew things out of proportion.

Wired: The thing with Sheffield is that everyone is trying to pin the Sheffield scene on bands of the past, like the electronic bands and Arctic Monkeys. Arctic Monkeys don’t even live in Sheffield no more. They made their last album in America.

Terence: They’ve progressed, which is good. To be honest, I prefer the newer stuff than the original, when they were supposed to be a Sheffield band. Once they lost that Sheffield identity, they got much better. It’d be nice that people believed that there’s a scene, maybe a bit more attention. More togetherness too.

Wired: There is some togetherness now, there are bands that helped us loads and we try helping others out. Bands like The Violet May has helped us endlessly and they are really good mates. Electric Tape Recorder as well, the guys from The Book Club are helping us too, with things like gigs and advice. Bromheads as well have been very supportive. Then there’s people like you doing interviews, and magazines and blogs.

Wired: And we were talking with someone from London the other day and he suggested that it would be nice to have a label in Sheffield, someone kickin’ out some singles and EPs, maybe it will come.

Terence: People are still self-releasing instead of going out of Sheffield, they are doing it themselves here, rather than travelling down to London, ’cause it used to be the thing: you form a band in your hometown and you move to another place.

Epic Morecambe, your manager is asking for sex and alcohol as payment, how is that venture going up?

Terence: Epic hasn’t got no sex nor alcohol as of yet.

Wired: Which is probably a good thing, as he is addicted to both.

Terence: He is a-dick-ted to both!

Wired: He can be a liability sometimes, but he tries his best.

Terence: Which is to rudely reply to every e-mail we get and then we have to come and make amends after.

Wired: We try to be a polite band, not offend anyone, overtly. But Morecambe doesn’t have no ways in decency.

Terence: He’s quite elusive as well, we’ve never seen him in public!

Wired: Nor to any of our gigs!

Terence: Fuckin’ asshole! He doesn’t even know how we sound like!

You’ve stated several times in your gigs that your songs are about women and death. Could you explain the difference?

Wired: They are inextricably intertwined.

Terence: It is usually recommended you don’t have sex with Death.

Wired: That or a dead woman.

Terence: That’s probably the only difference?

Wired: Some people might recommend not to have sex with a woman.

Terence: Some might say… they would be wrong, though. It also depends if said woman is a man.

You had your free EP for download for a while, it’s out in the open. Do you have any plans for a cd coming up?

Wired: It’s not been recorded yet, but it’s on the line. We have a few plans to record, but nothing concrete. We’d like to record it as soon as possible, ’cause we are quite sick of the songs on that EP and if all goes well, we would like to have a cd released after Christmas.

Terence: Maybe in a more…I wouldn’t say in a more polished sound, but, a more focused recording, be it an EP or a full length, we don’t know yet. Potentially both. Neither. Either. Or meither.

You seem to know your alcohol really well, do you have any preferred Moonshine recipe?

Wired: We find that mixing different types of bourbon in a bottle of Jim Beam works quite well. It stops your throat from being sore and makes you drunks.

Terence: It annihilates brand loyalty too. That is a good thing. Or drink a lot of things, as long as they are mixed together and git you drunk.

Terence: Probably one of the best ways to kill and cook a squirrel is with your motor vehicle. Run that motherfucker over, some road kill on the go. And don’t even take it home, just open up your hood and cook it up in the thing. The only condiments you gonna need will be made in the cooking process, you gonna get a bit of gas in there. It’s gonna get real hot, burn all that fur away. Stir it right off from your carburator.

Wired: Only eat the eyes.

Terence: Only the eyes. Or any of the balls. Eyeballs and normal balls.

I have a question for you, Terence, is ‘Rumble’ the greatest riff ever?

Terence: It’s definitely one of them. Technically, it’s not a riff but a chord progression. There ya go. Put you down! It’s a good one, great tune. For a tune to come out with no words and be banned, I think that’s pretty much down to how fucking awesome it is. It was banned for inciting delinquent behaviour.

And now you, Wired, would you recommend any budding drummers to play with their shirt off?

Wired: It would depend on how sweaty they get.

Terence: And how good their body is underneath. I’ve used this phrase many times “who need hair when you got a body like that?”. I would also recommend to any drummer, not being a drummer myself, but I think one of the coolest thing about Wired is the lack of the hi-hat. And no hat and no hair.

Wired: No hat, no hair. No flair. No talent.

Terence: No hat, no hair, nothing there! 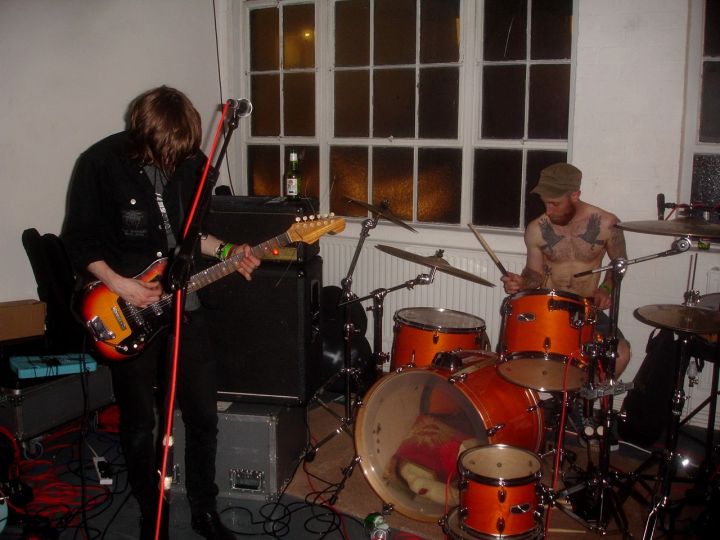 Um, there’s another kind of famous musician that is trying to copy your style, some guy called Rob Zombie and has an album called “Hellbilly Deluxe”. Would you consider suing him?

Terence: It could possibly be our move into fame. That’s next on our list of PR stunts.

Terence: Sue him and become millionaires and blow it all in whisky and shiiit.

Last question of this ordeal: Do you have any piece of advice for our readers in both sides of the Atlantic?

Wired: General advice? Watch your back. Listen to Enya.

Terence: Don’t put all your eggs in one basket, don’t count your eggs before you put them in a basket and before they’ve hatched. Too many cooks make too much broth. And start a band. Everyone should start a band. Learn three chords and start a band, that’s my advice. Do it twice. That’s real nice.

Thank you very much.