What is it with Folk being intrinsic to the British evergreens, moors, and peaks? Is it the water quality? Is it the splendour of nature? Or is it the mysticism it emanates from the humid moss, the fungi eating away the rocks or the overcast skies?

Bad folk can drive you insane. Bland folk is a litmus test of terrible coffee shops. Good folk, though, that one you remember. That one, you hum along to. It’s the one that’s crafted with the utmost diligence, with a clear passion for the genre. Enter Captives on the Carousel, a duet of BFFs inspired by a great Joni Mitchell song.

Sarah and Ben have a simple set up: guitar, an angelical voice, and an atmospheric approach to cello. No protagonistics jibber-jabber, no egos, no pointy shoes. Just songs that are deceptively easy, but boondoggle themselves into your mind with their beauty and their complexity. I always imagine them as storytellers of unwritten folk tales; long lost narratives about mental health, the concrete and steel wilderness that is Sheffield, and a weird sense of nostalgia for something you’ve never experienced.

Take ‘Russian Doll’, which seems to be based off a classic piece, somewhere between a minuet and a waltz, but no, it’s an original one. The solemnity of the track could very well fool. It’s the wisdom of age, still in young hearts that race strong. ‘The oak tree’ always reminds me of a re-interpretation of Dmitri Shostakovich‘s beautiful Waltz No. 2, brought to life in the leafy green suburbs of a city once proud of its steel industry.

Now, don’t get me wrong, there’s more than a clear love for the classical maestros  we love so much. Songs like ‘The Bell Jar’ hint at post-rock sensibilities, with the droning cello easily replacing a guitar with a space echo and an infinite delay/repeat. Contrary to post-rock, though, the crescendos reside in Sarah‘s vocals and Ben‘s cello lines, so full of longing, so emotional that Charlotte Brontë would blush in their presence. 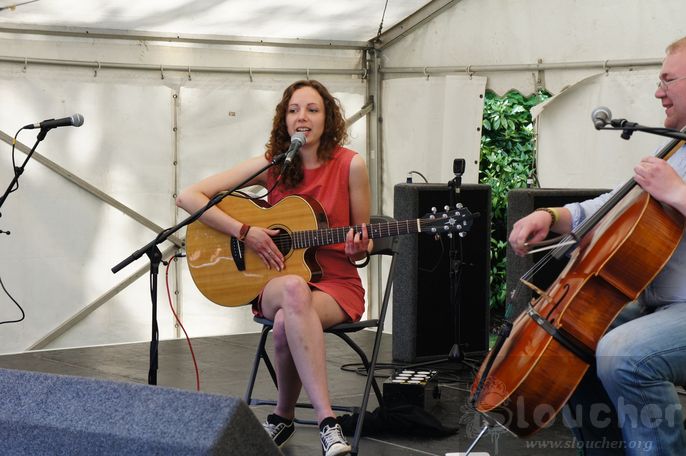 They have two EPs and I remember being enthralled by The Garden. I couldn’t quite write a review for it, I felt inspired to do a rambling short story. As much as I loved their first EP, the material in The Garden was a league above. Mammoths like ‘Too Soon’ could tug your heartstrings so hard they would break. Fear not, Captives on the Carousel would soothe you back, with their perfect loom abilities. A fantastic cover of ‘She moved through the fair’ was another highlight in this second EP.

Favourite gigs? I’m quite fond of the one in June of 2011, at the Riverside Live. Warm afternoon, great moods, preceded by the talented Gina Walters (another great voice in Sheffield). Captives on the Carousel‘s set was splendorous and I still chuckle when reminiscing about instruments being distributed to the audience so they could join in. Tramlines 2011 was a good one too, in that lovely patch of green called The Folk Forest. Even when they were mostly ignored by a crowd too intoxicated for their own good, they put a good show. Top of my mind, a gig outside The Greystones in August of 2012.

Captives on the Carousel did take a long break due to life being its nasty self. Don’t fret, they are still around and the gigs have been slowly coming back. They are a good example that a well-trodden genre like folk can still generate wonderful, magical stories that exult both the earthly and the otherworldly. Our guides, our Virgils, if you will, in the nine circles of Folk, will always tear themselves asunder and sing about it.

#movienight #quentintarantino #reservoirdogs parte two of the marathon. Bought this one in a best buy in Arkansas ages ago.
Saturday. #yorkshiretea #baronsamedi #gingernuts
Avoiding the quarantine blues with some #baking #whitebread #gingersnaps
Blyat...
My connection went weird, but here's my cooking, @sissonles
Merci beaucoup, monsieur Uderzo.
... simpático cyborg?
I've had this coaster for eleven years.
More exam doodles from students. Chuckling hard at the German one. #teachersofinstagram