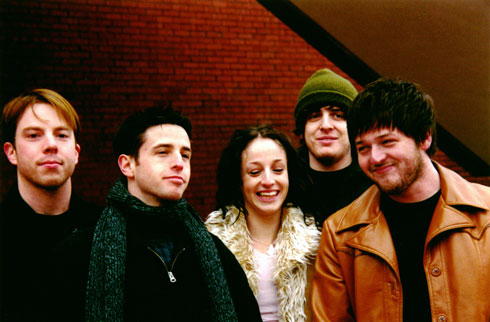 This one I have some history with. Flashback to 2011. It’s late November, the city of Sheffield is the coldest it has felt in ages and the amount of lab work I need to do for my PhD is staggering. On a personal note, things are going a little south in a relationship and it feels like it will all end in tears.

The only music I was listening in those wet, bitter days of November was Headlights. A long time fan of the band, I knew every album, every b-side, every strange, wonderful note, even that weird Christmas cover. And even then, I never ventured into their previous venture, Absinthe Blind. I did check the first single by Psychic Twin and I enjoyed the change of genre from Headlights. Psychic Twin felt like the natural evolution from Headlights, with enough of the dreamy atmosphere kept intact, but now using electronic beats to deliver the gut punch.

So, one cold 23 of November, I was cruising Spotify and decided “what the hell? Time to see what Absinthe Blind was all about…” It was both to see if the same evolution from Headlights to Psychic Twin happened in Absinthe Blind to Headlights. The Everyday Separation was consumed in its entirety while doing statistics and correcting data from a dodgy HPLC.

Then I hit a wall. It wasn’t the pressure of the PhD. It wasn’t the soul-crushing realisation that I was in a doomed relationship. It wasn’t the badly insulated student room that shook with every gust of wind. No. It was somewhere around the middle of Rings that I had to stop everything I was doing. The song was called ‘Do you know what you mean to me’. I wasn’t paying any attention to it, but at the precise moment that the buzzing electronic drones and sparse electronics yield to an explosive, cathartic build up, I lost it. The lyrics are mostly hushed, with only a “do you know what you mean to me?“, clearly sung by Adam Fein near the end, giving the coup-de-grace. Skip a track back, trace back where this emotional sucker-punch originated. ‘Walls covered in hope’, a song the line “And I did not ask to be saved that day” with a subtle delivery. The weight is carried by the beautiful arrangement that builds up towards the line. The emotion is earned and justified, it’s not there to emotionally blackmail you.

And I kept tracing back. The lyrics, weren’t in the usual verse-chorus-verse style, they seemed to tell a tale that had a slight greek-chorus style repetition in some parts. Even more, there was a refrain that appeared on two tracks. “She said playing in bands won’t make you well.” This was in ‘Bands 1’ and ‘Bands 2’, the first time appearing in a mantra fashion, with an electronic hum in the background. It’s the second version, ‘Bands 2’, what is really telling. This was an album about break-ups. Not only in relationships, but also in a band’s dynamic. ‘Bands 2’ had such a haunting atmosphere, it kept resonating even while inoculating Petri dishes in a lab where the extractor’s hum was the only noise you could hear late at night.

Early December 2011. A flurry tiptoes outside and a day of lab work is finished. Another trip through Rings and in that strange land where you are half asleep, half awake, ‘She Saves/Now I’m where I need to be’ makes the outside world vanish. A 9-minute juggernaut, arguably the finest moment of the band. The dream pop & shoegaze gloves are off, they touched that magic aether beyond comprehension and created a haunting melody that effortlessly switches from majestic noise into a wistful passage of longing.  How can you follow something as gorgeous as this? With a swansong, of course. ‘Bands 2’, in just seven lines, captures that feeling of loss we all have to go through in this life. Honest, curt, and brutal, ‘Bands 2’ only needs Adam and Erin‘s vocals and a piano to truly display what loss is.

But break-ups don’t always need to be tragic, there is hope and there is space to change. There’s also forgiveness, not only to others but to oneself. ‘The Break (it’s been there all this time)’, ‘Shields’ and ‘To Forgive your enemies’ carefully dissect the feelings of anger, defensiveness and absolution. There’s never outright anger in ‘The Break’ or in ‘Shields’, it’s all carefully placed in layers, using guitars, drums and mellotrons to convey those feelings. ‘To Forgive your enemies’, an instrumental track, only needs the lyrics “You can” to drive the point home.

“She said playing in bands won’t make you well” is a sad mantra in ‘Bands 1’, but it’s also a realisation, and the genius is in the musical arrangement, conveying a feeling of liberation after accepting that this is not defeat, but a conclusion. A period of recovery is needed. ‘Inside my mirror’ feels like doing a self-assessment, understanding that the bitter and the sweet need to co-exist. ‘Walls covered in hope’ passes from a full depression into an exorbitant high; the storm has cleared, the sun shines through and light at the end of the tunnel is closer. ‘Do you know what means to mean’ is so hopeful and warm, it feels like a palate cleanse.

‘The Dreamers song’ never hides that the Absinthe Blind are very fond of The Beatles.  Or at least the protagonists of the song aren’t, as the ultimate goal is composing a song worthy of the admiration they have for The Beatles. “It’s our turn to write The Beatles song / so you can sing along / and I can leave this place” the song promises and once the deed is done, mellotron and all, the Yellow Submarine is sailing away.

So, songs about being fed up, songs about the need to move on and songs about burying the axe. A decision to leave is taken and some goodbyes are needed. ‘Ease the curtains down’ and ‘Brave’ complement each other so well, acknowledging that not all hopes can be met and that the right course of action might be accepting realities (“Moon did fail to provide any light“). The ending of ‘Brave’ crosses into Arena Rock in its epicness, clearing a path for ‘She Saves/Now I’m where I need to’.

And I don’t want to repeat myself because it was the combination of ‘She Saves/Now I’m where I need to’ and ‘Bands 2’ what made me obsess over Absinthe Blind, a band that deftly took too many influences and created their own sound. Over the course of five albums, the band from Champaign Urbana developed their sound so well that it’s almost like a lucid dream. You can feel they hit gold with Everyday Separation (an album I need to write extensively about too) and they hit while the iron was red hot with Rings.

Rings is the sound of things falling apart in an orderly fashion. It’s the controlled demolition of a once beautiful building that needed to come down not because of any foundation problems or cracks, it just had outlived its usefulness. I’ve managed to talk through the years with some of the band members and Seth Fein is now the driving force of the ace Pygmalion Festival, Brett Sanderson, drummer extraordinaire, did a tour of duty with Headlights and is a happy family man. Adam Fein released the great Sunblown as Gazelle (our review and interview) and Erin Fein keeps weaving intricate music as Psychic Twin.

Many last albums are rife with troubles that bred songs that found their place in the souls and hearts of music fans. I might not be the biggest Beatles fan in the world, but if someone ever asks me for my “Abbey Road-esque” album, my answer will always be: Rings, by Absinthe Blind.

You can still buy Rings from Parasol Records store.

Don’t take my word for it, listen: