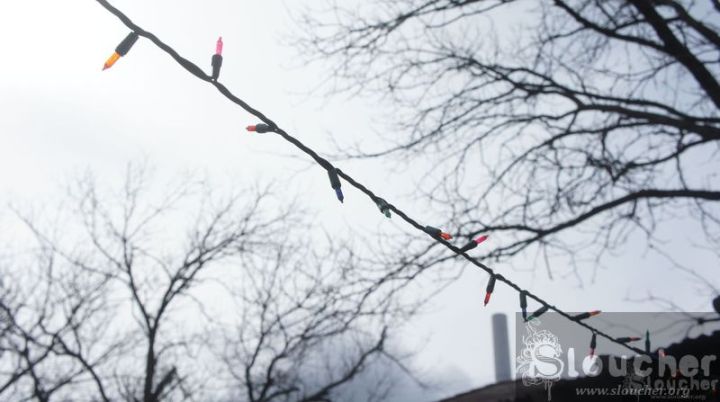 Note/Warning: My proper reviews for SXSW will be on La Pop Life and Gold Flake Paint soon(ish). For Sloucher, I’ll be posting diary-style stuff, mostly unedited (barring a few typos that had to go away, replaced by more typos. Most of these diaries were written late at night and honest to God, this is how they went. No clear cut narrative is intended, just general ramblings. Enjoy this Gonzo-style experiment.

“Wakin’ up is a hard to do” would be a great name for a pisstake of love songs. It’s also my way of life, apparently, as I opened my eyes at 6 AM but haven’t moved for three hours. CNN has all sorts of theories about Malaysia Airlines. Terrorism. Sabotage. Pilots going loco. Black holes. A lot of speculation but no proof. Hey, just like a PhD thesis, am I right?
Billy Joel’s ‘Prelude/Angry Young Man’ gets me off the bed. Oh, well, guess I have to eventually get some food. The fine folks of The Eastern Sea offered to pick me up at the Motel and I still need to get a phone, as the roaming charges from Telcel are bleeding me dry. Shower, band t-shirt and off to IHOP we go. Alarm bells ring when I see a friggin’ queue outside the place. It’s too late to go to another greasy spoon and I see everyone around is sporting a SXSW badge. Lucky bastards. The host pronounces “Sam” much differently than me; Babel, I love you so much but you’re breaking my heart.

I didn’t remember how different the food style and quality changed in IHOP’s franchises. Found the food pretty satisfying and for a moment there, surrounded by bearded creatives and The Thin and The Trendy (TM), I felt a good writing vibe, so I jolted down some notes and possible names for a novella I want to finish this year. I blame the quality coffee for the varied range of titles. Or the blueberry syrup that made my hands tremble with sugary anticipation.

Another long walk, this time trying to buy a SIM that would work with my Mexican phone. Both Target and Radioshack employees said no, but offered a phone. I end up hiring a “traveller’s package” from Telcel and they assure it will last until Saturday. We’ll see about that, as their nefarious charging schemes are draconian, to say the least.

Matt from The Eastern Sea got in touch via Twitter, offered to pick me up and give me a tour of Austin. I was waiting in the registration lobby and he arrived, cool beard and all. He probably recognised me because I was the only Mexican-looking dude around wearing a t-shirt of his band. Keyboard player Kurt was also in the cool looking van and they gave me a tour of Austin. We talked a little bit about the history of the band and about Sloucher, trading a few good ol’ anecdotes. Some small talk about why I’m not in the UK anymore and where I’m headed ensue. I was getting a little restless and the gas tank was getting empty. Thankfully, a couple of jokes filled to the brim with Star Wars references light up the mood and a nearby gas station fills up the van like coffee fuels my rants. 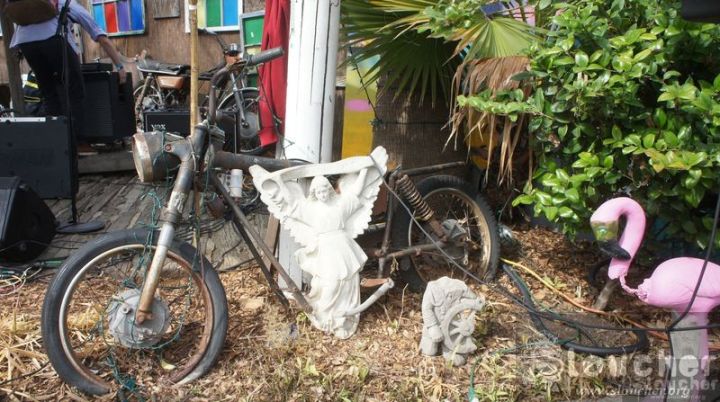 We get to the Spiderhouse Ballroom and I help them load off the gear into the back of the stage. I notice a myriad of pennies, strewn across the pebbled on the backstage. “Tough crowds ‘round here” I think and for a minute there, I imagine several rustlers in the audience, firing shotguns using pennies for buckshot. Hey, finally a practical use for pennies.
First band is a bunch of fellas called Wood and Wire. No drums on sight, just a mandolin, guitar, banjo and double bass combo. They take turns with vocals and their energetic music gets a couple of people square dancing. Gotta love that magic “dancing energy” that Americana infuses on people. It just can’t be replicated by any other genre. The mandolin and banjo dudes are killing it in some songs, coming more a shade of Mustaine than Malsteem speed, with the tactical precision of that drone from The Bourne Legacy.

Speaking of, there’s a bunch of Infowars magazines stacked neatly by the entrance. Very tempted to steal one, but my hands are busy, balancing the NEX-3 camera and a pint of 512 Pecan Porter, an ale so good it runs circles around a lot of British pints. Anyone making fun of American alcohol should try the stuff made by 512 Brewery and then regret their callous judgements.

It’s no secret that I’m a big fan of The Eastern Sea. I was aware it’s a bit of a faux-pas to be wearing the t-shirt of the band you are watching, but, eh, life’s too short. They start with ‘The Match’, a song I think they want to leave in the past. This suspicion might hold true after hearing the rest of their set, made up of new songs from their upcoming album. It’s a very tight set. There’s funk, there’s vintage 70s pop structures and there’s even a couple of creepy moments, courtesy of a double mic set up that allows for some vocal effects. All the songs are extremely catchy and I think one is called ‘The Curse’ and another one called ‘Boy in Blue’. The reception is warm, even if a drizzle has been intermittently messing with the audience.

The drizzle is now a light shower and the cosiest looking people right now are the 15 musicians on stage. It’s Bright Moments with Mother Falcon, two bands being symbiotic for a while, Venom and Eddie Brock style. It’s a half-chamber/half-jazz combo that works, helping people ignore the weather’s vicissitudes.

The double bass player from Hello Wheels caught my eye. The reason? His Magnolia Electric Co t-shirt. We are close to one year of having lost Jason Molina to alcohol and it still feels fresh. Even if I never met him nor saw the band live, it felt like a hard hit on the soul to read he passed away. Anyways. Hello Wheels continue the Americana sound just fine, with a small suitcase full of harmonicas, a drummer who was left out on the rain (MacArthur Park style) and a set that felt brisk, maybe too short.

A sign by the stage says Austin. It’s lit up in very colourful lights. Besides it, a big sign says “BEWARE COFFEE.” They truly are making me feel at home. Before the next band, The Melodics, comes on stage, I walk towards the second stage. The bass player for The Eastern Sea is performing there with another band, called Alex Napping. I’d hate to use the term “dream pop” because everyone abuses genres, but as a stepping stone, I’ll throw the term. Dashes of The Sundays are here, even if it’s faster paced.

I come back to the main stage and for a moment, the little statues in the stage seem to move. I blame my natural fear of Weeping Angels. The Melodic remind me everything about being back in Sheffield; it had to, as their sound screamed British Pop, just like the weather. I was too tired to make any good notes (as if any of my notes are good), but I remember a clear melancholic sound and a duelling melodicas ending.

Darn it, those little statues are really giving me the creeps. I walk outside for a few moments. Hunger is hitting hard, very hard and dusk approaches. I ask the door people if they recommend any place nearby. They pretty much give me the phonebook. Undecided, I thank them and decide to walk around. I get the feeling of walking back to Motel 6.

Hear that? That was the collective sound of everyone who knows how distances work. I foolishly thought “well, the average human speed is 6 kilometres per hour, I should be back to the Motel in an hour, right?” Wrong. Dead wrong. Still, it was a nice walk.

Dusk in that area near the University of Texas is almost spellbinding, like that film, Days of Heaven. The magic hour (or was it golden hour), where smatterings of light still exist despite no sun in sight. The empty streets felt equally scary and welcoming, with the random human sighting never managing to spoil the magic. Sadly, I’m between high buildings when the belt of Venus happens, so the perfect sky becomes slightly imperfect.

I don’t know what it is about walking through a University Campus at night. Sure, it’s probably unsafe in theory (and practise, I guess) but I found it very relaxing, especially since all I listened through the walk was Explosions in the sky. I notice that the stadium “Greek columns/ruins” were actually the lights. Oh, well. That’s what fatigue will do to ya.

I eventually made it to the I-35 , where I just needed to walk north, right? File under “Sam’s stupid decisions” and put it in a folder, of which there are many binder volumes. The road seemed endless, with no taxi on sight. I thought about hitchhiking, but I never convince myself of slowing down, not even to catch my breath. They say that meditation is doing a repetitive action without putting too much mental energy on it, so I guess I got a lot of meditation done, right about somewhere near 42nd street, where my hip felt like it was trying to scratch its way out.

The sidewalk finishes somewhere and you need to walk over to Clarkson Street, slightly parallel to I-35. I then see the light at the end of the tunnel: In n out. I’m ready to drop the floor, just like Jon Pertwee at the end of Planet of the Spiders, but the menu gives me a second wind (I’m only human.)

Double burger, animal style fries and root beer. Whatever you think of fast food restaurants becomes a lie once you eat In ’n’ out’s food. Most of the clientele looks like young pros and groups of friends, having a greasy start for the week. I just want to sit down for an hour or so.

My phone rings. This conversation happened:
Orestes: “How did it go? How was the trip?”
Me: “Pretty swell! Yesterday on the plane I saw a hefty dude dressed up in Denver Broncos paraphernalia. He was sitting right next to a guy wearing a Seattle Seahawks hat and hoodie.”
Orestes: “Christ, American Airlines is just playing with fire now. How was The Eastern Sea?”
Me: “Excellent, dude, you gotta see them live.”
Orestes: “Cool, just don’t become the Yolanda to their Selena, you fanboy.”
Me: “Thanks, I guess? What’s the plan for tomorrow?”
Orestes: “Do I really look like a guy with a plan?”
Me: “Point taken. Bye.”

I finish my meal and the moment I stand up, I feel it: a piercing pain, going through my feet. For a moment I fear a ninja assassin setting up caltrops under my feet, but nothing is there. I fear the morning, so I drown the pain with another refill of root beer, hoping the sarsaparilla will somehow magically cure my pain. Homeopathy works if you will it, right?

It’s “only” seven more block to Motel 6 and I feel like John McClane when I reach my room, the glorious looking 262. Shoes and socks fly away as I throw myself into the gigantic bed. I turn the tv and CNN is still milking the pain of friends and relatives in another continent and I wish for a moment I’d taken an Infowars mag to satiate my curiosity. My final thoughts before snoring the night away relate to how gorgeous was the singer of The Melodic and how much she reminded me of a friend, now long lost to that unforgiving oblivion we called life.