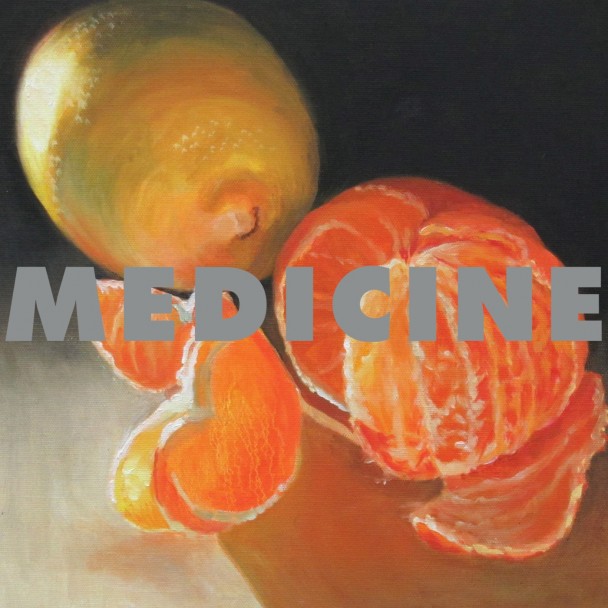 It’s been eighteen years since Los Angeles based Medicine released new material, and over twenty since the original line up all played together. So, with psychedelia infused grunge, shoegaze melodies and a love for guitars with extra distortion, let’s see what Medicine have produced in their latest offering, the long player To the Happy Few.

‘Long As The Sun’ is a strain of feedback and guitar modulation, as well as the Beach Boys, I would also suggest Neil Young’s guitar is sneaking in for a free for all. Beth Thompson’s vocals are ghostly and intangible at times, layered below Brad Laner’s guitar, given free roam to explore the sonicsphere.

Underneath it all there are hints of electro antifolk just hiding within the structure. It’s all very trippy and psychedelic, to the point where it almost becomes a pastiche of psychedelia, but thankfully the track cuts itself short before that shark can be jumped.

‘It’s Not Enough’, sounds suspiciously like Chemical Brothers’ Surrender offerings, as I anticipate Noel Gallagher’s vocals to hit at any point during the track. That being said, the musical hooks are strong and technically very good, especially when the keyboards kick in during the finale’s build.

‘Burn It’’ shares the psychedelic funk of MGMT and is subversively dark in it’s pop. Along with the love for vocal effects and looping guitars, it creates a sense of foreboding which is somewhat jarring against the previously trippy tracks, although the track retains the avant garde sense of percussion and production.

It’s follow up, ‘Holy Crimes’ is a delicate structure of glacial vocals and and implied Scandinavian cool, with bursts of distortion and organs. It feels less like a song and more like a musical sculpture.

‘The End Of The Line’ is a hazy, smokey exploration of vocal melodies and acid rock, Thompson’s vocals allowed to lead and direct the melody, it’s shoegaze Jim, but not as we know it. There is a simplicity in the drumming, but it’s a driving rhythm that allows the guitars to expand and contract, to be mixed and twisted, fashioned rather than played.

In fact this rhythm in the drumming carries over to ‘Butterfly’s Out Tonight’, with the percussion creating a breakbeat similar once again, to that of the Chemical Brothers in the late ‘90’s. Laner uses this rhythm to stretch his guitar sound, investigating what he can do with the sound and the instrument, whilst Thompson continues to keep everything moving forward with her vocals.

‘All You Need To Know’ slows the temple down, but the vocals remain otherworldly as the guitar drowns in distorted fuzz effects and rolling, swirling reverb.

Laner produces his guitar with a sound more akin to synth keys during ‘Find Me Always’ than that of guitar riffs, creating articulate, yet sporadic melodies alongside overbearing, heavy atmospheric chord progressions, which gives the track a short moments of paranoia alongside extended sweeping vocal melodies.

‘Pull The Trigger’ has an uplifting buoyancy to the chord progression, there’s also an endearing simplicity to Laner’s melodic guitar hooks, matched by Jim Goodall’s snappy drumming. It’s light and breezy whilst still retaining an edge no dissimilar to The Pixies.

Album closer, ‘Daylight’, is a complete shoegazers dream, with vocals so layered and modulated it’s hard to know what the original recordings would even sound like. Goodall’s drumming switches from light and relaxed to sharp and punkish, focusing the production and giving the track a tempo rarely found across the rest of the album. This in turn produces a wall of sound from Laner’s guitar, as he wrestles with the strings, bringing the album to an abrupt, but powerful close.

For a band that haven’t released any material in almost twenty years, it’s impressive to hear how fresh and relevant this record sounds. It’s a complex record, filled with more ideas than many contemporary artists and bands currently doing the rounds. If you want to listen to a modern shoegaze, noise pop album, you might as well listen to the band that were around for the first time it happened, and realise that sometimes, things don’t need to be reinvented, just explored a little further. Plus, distortion should always be used, always.