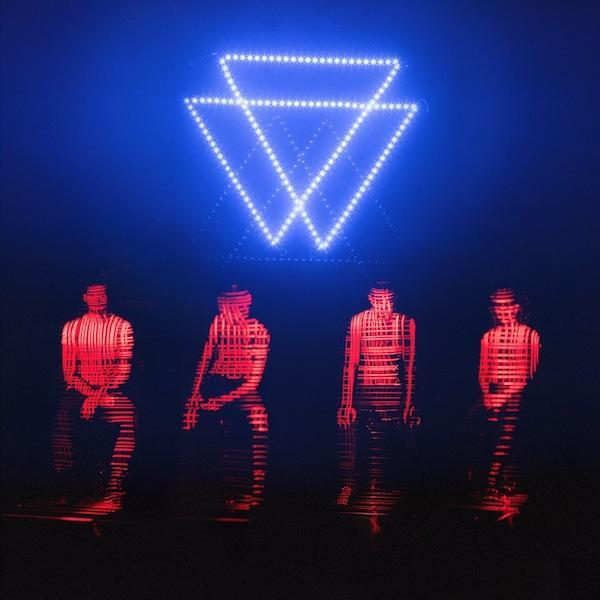 A couple of weeks ago, I descended into a pub called DAda in Sheffield and in that hazy, smokey place, I saw Vuvuvultures. Smoke machine on full, their triple inverted triangle logo, a very bright blue light and their shapes were the only clear things you could perceive visually. However, it was their sound what really captivated me, that slight clash between a light shade of industrial with the hook-heavy nature of pop. That you could perceive (and feel) clearly.

They do have a very conscious aspect to how they look and perform in order for their music to stay with you. Case in point, the slightly disturbing video for ‘I’ll cut you’, which includes a nightmarish face that reminds me of Sandman‘s The Corinthian :

Anyways, I only mention that video because the visual aspect of Vuvuvultures plays heavily on how you will receive the band. When I saw them at Tramlines, I knew what I was getting into and still got a great show.

So, what are Vuvuvultures? I think I compared to 80s neon vampires (see: The Lost Boys), mostly because of the heavy synth stuff that is part of their primordial soup, but also because those visual contrasts in colour reflect the sometimes chiaroscuro sensation the music in Push/Pull offers.

Dark is the brooding atmosphere for most of the tracks, even when they flirt with an almost peppy beat, like ‘Ctrl Alt Mexicans’, the song you can use to get people into the band. ‘Your thoughts are a plague’ is a very radio-friendly moment, when the band seems almost normal.

But there’s no normality here.

There’s a darker undercurrent and it becomes more clear in other tracks. ‘The Strangler’, a macabre slow dance through halls of mirrors, finds the band embracing a darker sound, where both their electronic-bred creations co-exist with the organic beasts reared by bass, guitar and drums. The aforementioned ‘I’ll cut you’ is still my fave track from the album. It’s a subtle descent into a realm that isn’t as friendly as it looked, but once you are in, you can’t get out unchanged. That scream is chilling and I’m happy to report it is as powerful live as in recording.

‘Death of us all’ feels like the moment the album will end. It has all the ingredients of album closer in its spirit, distilled in the darker recesses of the mind. Chilling vocalisations, a great electronic ambient and some cracking rhythm make it a monster track. ‘Empurrar/Puxar’ (“push/pull” in Portuguese) concludes the album instead, in a more sombre, Gothic note. It’s like the last rays of light the Sun manages to squeeze through after a massive storm has obliterated a town. You see light, but darkness is coming…

For all the bands that have embraced the 80s sounds in the last years, Vuvuvultures manage to imprint their own distinctive sound to it and Push/Pull is a solid first step for them. Catch them live if you fancy some darker shades of pop.

You can listen to Vuvuvultures and many great new bands in our podcast.