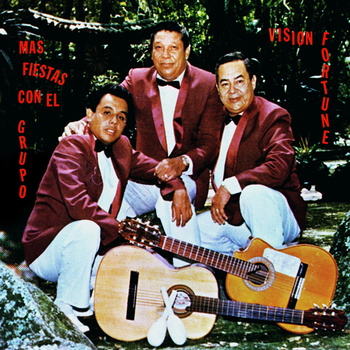 There’s a scene in Dominic Sena‘s Swordfish were Hugh Jackman is being lectured on the art of misdirection by an unstoppable and seemingly immortal John Travolta. If you are from México and you see the cover artwork for Vision Fortune‘s Más Fiestas con el Grupo Vision Fortune, you’d swear it’s a lost Los Panchos album or a Nueva Romántica cover band.

It’s a good spot of misdirection, and far more rewarding than, let’s say, that scene in Trainspotting where Begbie finds out the girl he was hooking up also has, well, the same configuration below the belt.

Let’s forget about daft analogies and say it straight: this is an album for people who enjoy music with rich, thick atmospheres and uncomfortable, mesmerising drones, something that Vision Fortune can do quite well. Add to this deeply rewarding album a spot of perfect mixing by Hookworms‘ MJ, whose Draconian approach to producing always yields an enjoyable experience, and you’re in for a treat.

‘XXII’ opens as a psychedelic slice of desert rock. Not the usual fast, aggressive desert rock you’d imagine you’d blast at 3 pm on a long stretch of highway, but the one you’d listen to around 11 PM while crawling, hoping that La Migra won’t catch you and chuck you over the Bravo River back to the northern wastelands. This song segues perfectly into the mantra-like ‘XX’, letting the notes flow in an unsettling form.

‘XIX’ abandons the usual musical form, transforming into an ever growing mix of hypnotic layers; a distant light in the distance that warms a couple of weary travelers with their thousand yard stare fixed on the flames.

‘XVII’ is a 7 minute beast, with enough mean intentions to guard its territory with utmost zealousness but still offering a catchy bass-drive hook that not only seems inviting, but makes the meaner sounds look almost comforting. This one’s a keeper.

The greatest Sci Fi soundtracks of the 70s were, in my very humble opinion, the ones were dissonant sounds droned for long periods of time, yielding an unsettling atmosphere that complemented the scenes on the screen. Think Brian Hodgson‘s soundtrack for Wheel in Space (that’s a Doctor Who serial, btw) or the abstract composition that Eduard Artemyev‘s made for Solyaris. Vision Fortune‘s ‘XVI’ punched me into another reality, where space stations with long symmetrical corridors and an unknown menace roam. I have no idea how the band managed to create such a gem but this is easily the type of music that fills my geeky soul.

But, hey, we gotta come down from space and rock out, right? Again, it’s the rather handsome bass riff what beckons you to stay in ‘XIV’, where the ethereal voices and minimalistic guitars create a psychedelic atmosphere grounded on reality by the masterful bass and the hypnotic drum. That synth swell is gorgeous too.

‘XV’ is a drawn out segue that reminds you that although you are back on Earth, Vision Fortune have taken you to the darker recesses of space, the one you’ll float back into very slowly in the smouldering trip called ‘XIII’, the gentle album closer that suddenly abandons all musical forms and drifts away on smoky synth-fuelled contrails, with the odd guitar note peeking its nesh face.

Is this an album that’s easily digested? Fuck no. Will you become “cool” or part of an “elite” by liking it? No. Will you enjoy it? Well, if you enjoy Hookworms, Psychic Ills and spacious experimental music, I’d be a fool not to recommend.