It’s weird thing, this trend of burgers being a delicacy. If you’d told me when I was ten that burgers would be on trend, I’d say you’re pulling my leg.

Not that I’m complaining. There’s more to burgers than sandwiching ground beef between bread, really.

Last year, we got invited to try out the new Harley burger menu. It went well, except for the extremely spicy burger competition. Not so much because of the burger, but those ghost chilli spice chips.

So, when the invitation to try out the brand new Harley menu, provided by the Twisted Burger Co., came to the inbox of this “shithole of a website”, I had to say yes.

Who would say no to burgers in brioche buns?

So, I quaffed 3 cups of  black coffee to incite the cortisol levels in my body (and therefore be more hungry), and then shakingly staggered to The Harley. After getting two drink tokens (wisely invested in Moonshine Ale), we were led to the Corner O’ Corkness (TM) of the Harley, where a parade of burgers, wings and side orders were brought for the catering pleasures of the food reviewers and enthusiasts. Copies of the menu were handed out too, and the artwork by Tom J. Newell is pretty nifty.

Without any further ado, here’s a few thoughts on each item: 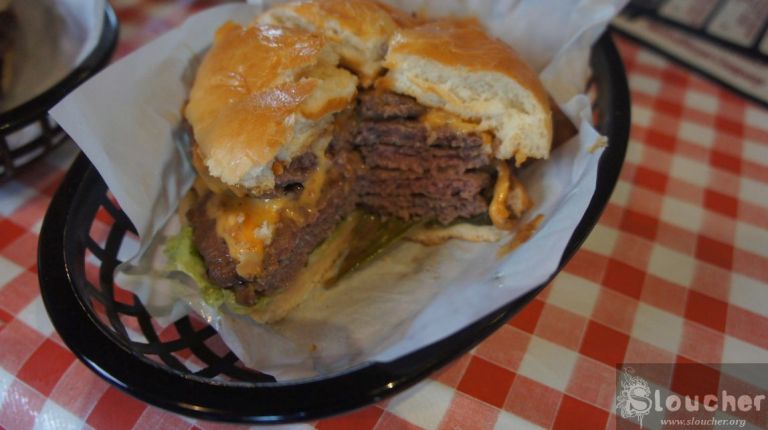 Pigger than hip hop: For lovers of bacon, this will be a treat. For addicts of bacon, this might be needed a bit more, but then again, you want to make it to the next decade, right? Moderation! The Onion rings make a great complement to the bacon and the Fireball BBQ sauce is rather good with the saltiness of bacon.

The Cabrona: That’s “the tough one” (f), for you non-spanish speakers. Three slices of beef, Monterey jack, pesky lettuce and guacamole. The real crowning jewel of this one is none of those elements (as great as they are) but the spicy beef chilli. How come? Well, instead of boring old ground beef, the Twisted Burger Co. went for beef shin. The first bite was a treat; the slow cooked beef shin is gorgeous. Probably my fave of the bunch.

Supersize me: Five slices of beef, a bit of bacon and cheese, the techno burger sauce (loved it) and some pesky lettuce (I actually do love lettuce, me…). I might not miss In ‘n’ out with these one. Shake hands with beef indeed.

The Ghostspiced Killah: I folded like a house of cards and skipped on this one. I might be Mexican but I know when a spicy meal might be my own Battle of Chapultepec (reference too obscure?). The one brave person who tried it was sweating during sips of beer. May Tlaloc have mercy on him.

Good Times: This one seemed to be dividing opinions. I like jerk chicken and pineapple, so this one was good. The jerk seasoning does kick in after a few bites, though, so it’s more of subtle attack than the Ghost spice one. Corn in a burger? Deal!

Fear & Loathing: Lovely chicken and bacon combo, with Fireball BBQ sauce that adds a bit of zest. Goes rather well with the breakfast fries (more about them in a bit).

Everybody Yurts: I don’t sneer at veggie burgers, as there’s tremendous possibilities with them (ever had a Carl Jr’s Portobello burger? They rule) The feta fondue pimps out the lentil patty but the real treat for your tastebuds are the sundried tomatoes. The jalapeño salsa is the (spicy) cherry on top.

Side orders (aka the fried squadron)

Hellfire fries: I had a few ones. It’s always the dusty chilli, man. Had to down a whole pint to take the pain away. In the words of my grampa Humberto, this  chilli is a chilli that rings twice. For the brave or foolish.

Harley house fries: Seasoned with Cajun seasoning. They have a bit of a kick, but it’s quite a bearable one, so no four-alarm emergencies in your digestive system.

Bad-ass breakfast fries: Now, these ones are a clear winner. You get a deep fried egg with them (if you’re lucky, it’ll be runny – more flavour!). They also get a bit of home made baconnaise, a blessing from hamburger heaven.

Chilli cheese fries: A meal on their own, really, as the beef shin chilli is way lush and gorgeous. Not too spicy, just enough to tickle your tastebuds. Think of them as an aftershock to the ghost spice Biblical earthquake.

Wings (aka the revelation) 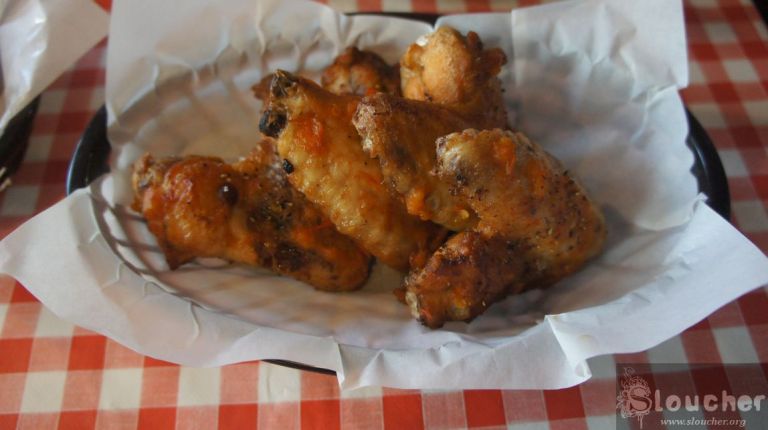 X-rated wings: Ghost chilli. I had a whiff and decided to be a good ol’ yellow belly.

Huckleberry wings: Very nice, with the Fireball BBQ sauce being a bit sweet and lovely.

PG Wings: Slightly fiery as you work your way with the wing.

Overall note about wings: There’s two things to notice about these wings. First: they aren’t smothered in sauce, so don’t expect the usual ones that require some heavy duty napkins. Second: they are big fuckers. I mean, they got proper big wings, not those pidgeon wings that Pizza Hut sells, but good sized wings. They are quite juicy too.

Well, it’s a bit of a Doctor Who thing, isn’t it? You need to re-invigorate a menu to prevent it from becoming stale and that’s what happened here.

So there you go, the new burgers are more Christopher Eccleston than Colin Baker. Kudos if you got the reference.