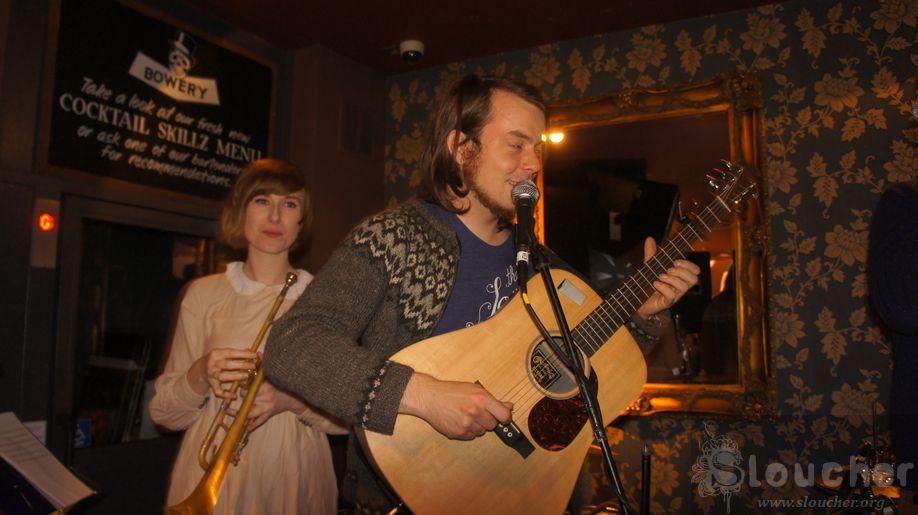 A few hours before this gig, I was interviewing Dad Rocks! and two things struck me: the wide-eyed perspective the band has about fatherhood (a central team on their great album, Mount Modern) and the extremely easy going personality they had. The interview went quite swimmingly (any band that likes Owen and Red House Painters is great in my book) and while I was setting up the camera at the front of the stage, it struck me that tonight’s pairing was indeed a very odd one.

Dad Rocks! playing folk that embraced rock and prog. Tall Ships playing… I wanna call it Math Rock but that would be scratching the surface of who they are. Two great bands with two seemingly clashing styles.

I love being wrong.

You see, the thing about this deceptively odd pairing is that the passion (and humbleness) both bands embrace so well is what really makes them siamese twins.

Dad Rocks! took the stage, with a trumpetist (she said she was from Brighton) and a violinist (didn’t manage to chat with him). Just like Red House Painters, you tilt your head the moment you hear that the vocals are probably even better live than in recording. Their loveable sense of humour (both in lyrics and general chit chat with the audience) made the gig even smoother, with some right funny jabs at Whetherspoons (“it’s McDonald‘s for adults”) and a quip about the song ‘Funemployment’ (choosing a job between erotic arts and McDonald‘s). It wasn’t all jokey, though, as ‘Major Labels’ is short, sweet but very poignant.

A recent mash-up EP made by local Sheffield artist 6001 Hulls featured tracks by Dad Rocks!, who liked this re-interpretations so much that they both released the EP on their label and invited the fellah to the stage to close the gig. The pre-recorded bit might have been a tad too loud at the beginning, but they rose above it. I honestly don’t know how many fans this band had before the gig, but I suspect they earn quite a few after their set, as the Bowery was already feeling like a Mexican underground wagon during rush hour (Line 1, that’s usually sardine line!).

While the stage was being set for Tall Ships, one of the DJs played Fleetwood Mac‘s ‘The Chain’. When the song goes into that sweet solo (preceded by those poignant bass notes), Tall Ships guitarist/keyboardist/singer Ric Phethean started to play on top of it. Good callisthenics, required to open the set with a firecracker of the calibre of ‘T=0’.

Playing tracks from their extremely catchy album Everything Touching, they clutched the attention of the entire audience, as if they’d cast a Bigby’s Grasping Hand (Int +3) with a (Wis) bonus. ‘Best ever’ is the sound of a band playing musical chairs with you, except that all chairs disappear when the music stops (and the bastards just celebrate with a dashing ending). ‘Gallop’ is the closest Tall Ships will be to make a dance song, with drummer Jamie Bush and bass player Matt Parker completely owning the limelight.

Much love was given to tracks from their self-titled EP. ‘Vessels’ finished the gig with what probably ranks as one of the best sing alongs I’ve ever seen (and heard) in my life. There was an encore and then, just like that, it was over.

It’s always fulfilling to see great bands being supportive of each other (both Dad Rocks! and Tall Ships keep thanking each other and the audience). It’s even better to have the bands play their souls off on stage and still have enough energy to hang around and talk with fans. On paper, it’s two bands with two genres that wouldn’t mix. In practise, it was that thin ellipse that forms when two circles meet.

So, yeah, The Bowery was a Venn’s diagram that night. Now, go check both bands!