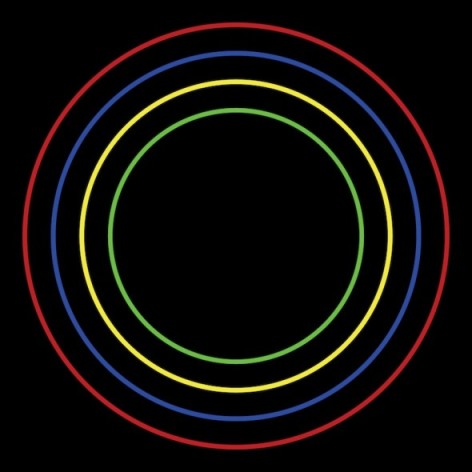 Bloc Party and their debut album Silent Alarm released back in 2005 were in some ways the misfits of the indie/post-punk revival scene of the time. Looking like awkward students they fit right in with… well awkward looking students. But Silent Alarm was at times stunningly gorgeous and complex and stood the test the time compared to many of their contemporaries of that era. Sophomore effort Weekend in the City was a solid but unspectacular affair and Intimacy was spectacular, but was the sound of a band trying too hard to make a ‘difficult’ album and forgot to include any good songs (I can feel the fan boys raging).

Starting with the obvious, Four is by far the heaviest Bloc Party to date – at times a fractured patchwork of riffs and ideas thrown at the wall in a ballistic but pretty remarkable fashion. How much of that you wish to contribute to bassist Gordon Moakes’ time in Young Legionnaire is open for discussion, but you wouldn’t feel too surprised if it turned out Paul Mullen (Yourcodenameis:Milo/Young Legionnaire) had sneaked in after hours to have his way with the album. Thankfully it never comes across as forced or gimmicky, it’s just Bloc Party turned up to eleven and it works very well.

‘So He Begins To Lie’ begins the album in the aforementioned fractured, patchwork style but more instantly noticeable is Kele Okereke – ironically in that he isn’t as noticeable. Where before Kele was forefront and centre to everything, he now has to fight against the music to have his voice heard and honestly it throws Bloc Party into a completely new perspective. Not to get all personal with this review, but it all comes down to a personal love/hate relationship with the band and more significantly Kele. But he takes a step back for the first time dynamically to flow alongside the music, and both sides reap the awards because of it. Perhaps you could argue it’s due to the heavier parts of the album and Kele’s vocal style may not suit those points, but Kele is clever and talented enough to work around such issues. It’s not just on the heavier points of the album, as songs like ‘Real Talk’ get to shimmer and not drown underneath Kele’s (at times) overbearing crooning.

‘Kettling’ sounds like Hell is for Heroes. I don’t even know what more can be said of that. Go listen.

And as for ‘Coliseum’… Well imagine if Beck got bored with ‘Loser´ halfway through and let Matt Bellamy finish the rest of it off but he also got bored of it and let Soundgarden do the dirty with it. Still with me? Ok good.

The insanity of ‘Coliseum’ is quickly followed by ‘V.A.L.I.S’, the most accessible song on the album and surprisingly (or perhaps not so considering the album in general) not the first single, whose honours go to ‘Octopus’. Taking Blur’s ‘On Your Own’ and Daft Punk’s ‘Aerodynamic’ as its foundations, it could be singled out as the weakest song on the album.

‘The Healing’ is the only song on the album where nothing really happens, but luckily unlike most of the second half of Weekend in the City, it’s only the one song that suffers this fate as album closer ‘We Are Not Good People’ rips your face clean off the skull. MORE ALBUMS NEED TO END LIKE THIS.

Four is the first Bloc Party album that can keep you drawn in from beginning to end. It helps from being completely insane at points, but also from being genuinely beautiful in ways they haven’t managed since Silent Alarms ‘So Here We Are’ as seen on ‘Day Four’. So whatever stage you are at with the band and regardless of which of their albums you may or may not like, let it be heard – Four is the best Bloc Party album to date.