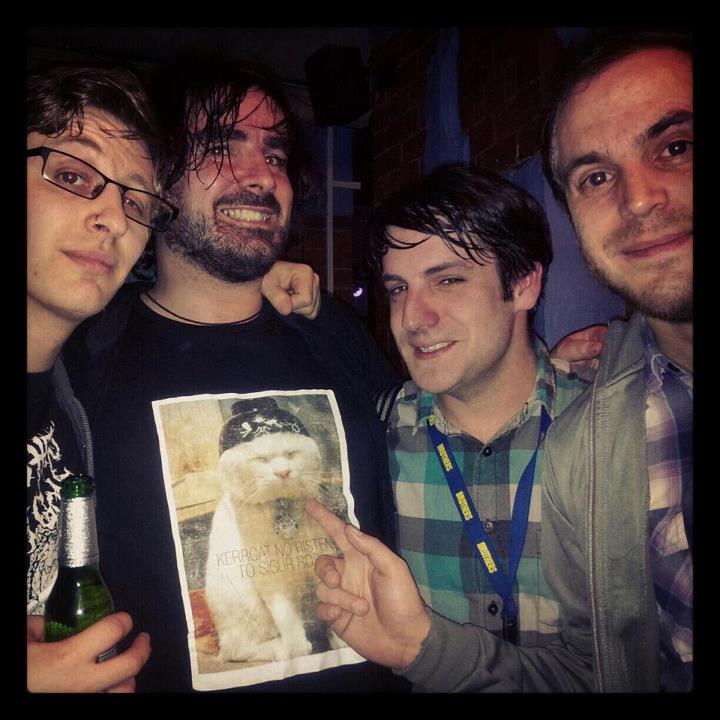 Hey, what the actual frijoles? I like dinosaurs, you bastards! We’ll let it slide because their EP is noisy and funny (link), and also because, let’s face it, you want a Gold Dragon (+5 in roll against disintegration) against a crappy Stegosaurus (-10 in all saving rolls. cowards). The side project for several members of Goonies Never Say Die (an awesome post-rock, spacey band!), Dinosaurs are shit dragons are quite the jam. Can’t wait to see them live one day.

Let’s go for the woolly mammoth here: why the name?

We were called TOTALLY DINOSAUR TITS but then we realised that Dinosaurs are just a bit rubbish compared to Dragons. Like most things we do there is no meaning behind it, we just say stuff when drunk and it sticks

We enjoyed the EP, Modern pop music for the socially inept. Are you planning to release more stuff soon?

We have recorded a 2 track single of the songs ‘You Can Lead A Goth To A Disco But You Can’t Make Them Dance’ and ‘Creatures of the Night Don’t Go On Jeremy Kyle’ that should be out of summer, we have plans to record another 2 track single soon as well for release around the same time

The Bible tends to ignore dinosaurs but it does mention dragons. Is this part of a devious agenda?

The bible was written by Dinosaurs, they opted to write themselves out of it so as not to appear vain

Walk us by your songs, what are they about?

None of them are really about anything but I cant try

It’s an ode to the epic Charlie Sheen, he isn’t quite as mental these days so we stopped playing this song until he goes off on one again

…If you don’t love Jesus, you’re a bellend?

We had the chorus/song title that we came up with whilst outside the pub having a fag, most of the lyrics are nonsense interspersed with vague comments about religious groups who use god as a tool to be bigots and express hatred towards non white non straight non American people

This is the first song we wrote, its about how the 60s were sex fuelled rampant fun and how its no so good to have that attitude anymore, its also about being a pirate and going on a sexual voyage with Mick Jagger.

…Simon Cowell is responsible for the decline of modern culture?

This song is about how the X-factor, Pop idol and all that have ruined modern music and instead of anyone doing what they want, experimenting or having fun we get the same manufactured pop nonsense year after year, it all sounds the same, does nothing and doesn’t go anymore. David Bowie would never have made it had he started out in modern times as everything these days is fucking shit

…Your cat is a wanker?

Its not about anything, we had a song title and tried to fit words into it. It probably didn’t work but we don’t actually give a flying monkeys fuckstick

You’ve released your EP for free. Should music be free or use the mp3s as a hook to get people to notice you and maybe catch your shows?

It was just a demo ep and therefore we didn’t feel worth selling. Although we may release the next 2 singles free. We have no illusions that anyone would hand over money for our random shouty nonsense, they can always just go and buy an at the drive-in and duran duran album and listen to them both at once to get the same effect

A couple of radio hits last year seem to cling on the idea that namedropping Mick Jagger’s name helps sales. Have we reached a point where lyrics are now too much dependant on clinging on other people’s fame instead of weaving a story?

I don’t pay attention anymore to modern culture or music, I listen to 6 music but that kind of nonsense doesn’t make it onto there. I have a Mick Jagger shirt and someone asked if I had the moves like him, I didn’t get the reference until someone else pointed it out to me. Personally we leave the serious business and world problems to greater people than us. We just like having fun, drinking together and finding the most awkward way to play a song. There is no need for us to start waxing lyrical and telling people how to live there lives, mostly as we be bare bellends and shit yeah?

What’s the plan for this year? A mix of both this and Goonies never say die? Tour?

We just got a 4th member on Guitar and Vocals so we are going to release a couple of singles, write some more stupid songs and try play some gigs if people will have us, get in touch if you want us to play yeah? We are just going to see where it takes us. Although we have not played out of Blackpool much yet, we are aiming to do that a lot.

One thought on “Interview: Dinosaurs are shit dragons”