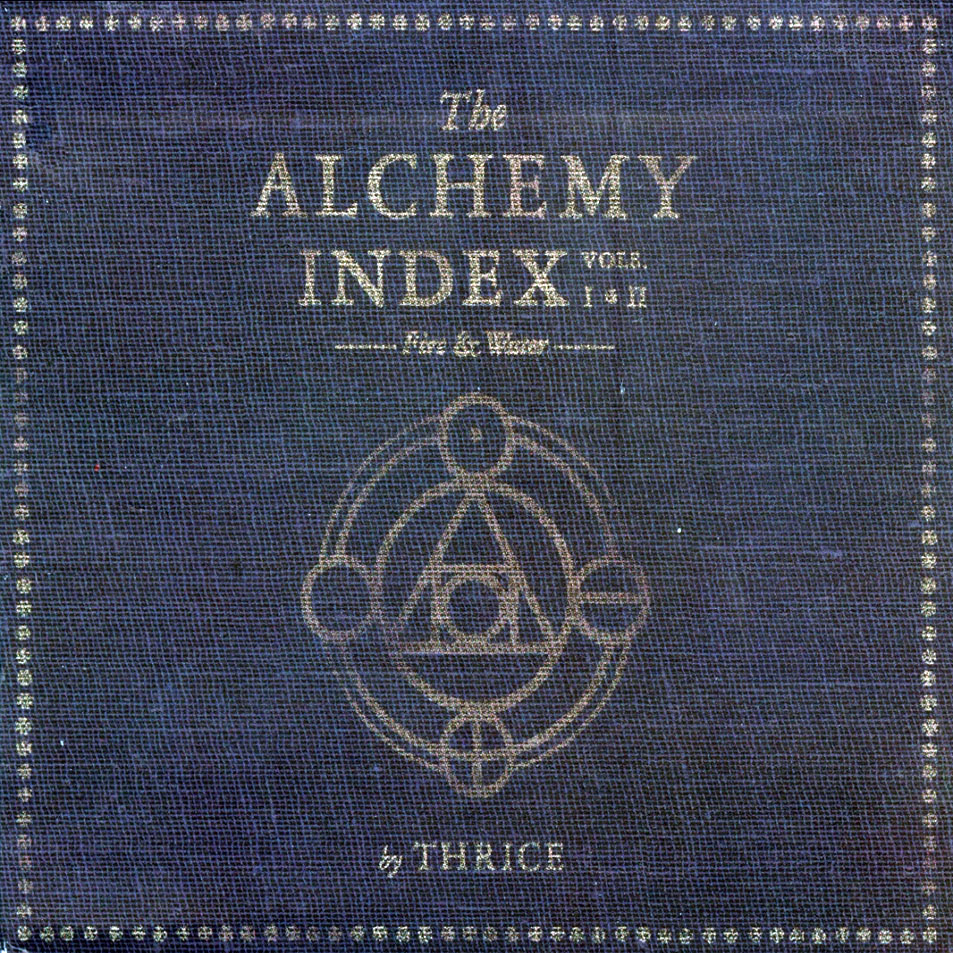 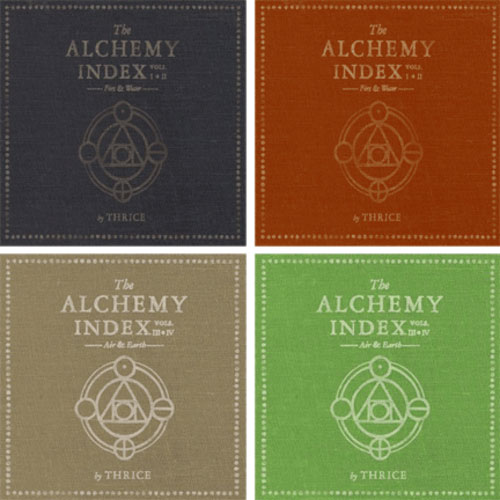 It’s always mind-blowing when a band you sort of tagged and bagged into a particular shelf in your genre cupboard (TM) becomes self-aware and evolves. Thrice is one of those cases: pigeonholed in the post-hardcore/screamo box, they pulled the rug for a lot of people in 2007 and 2008 with their quadruple EP (sold in two instalments of CDs or as a supersweet vinyl collectible) The Alchemy Index.

The premise : the four elements. The sound: varied. Thrice showed their musical talent by tackling a particular genre in each EP, and by golly’s stinky sneakers, they nailed it each time.

So, in celebration that the postman finally delivered a copy of their new album Major/Minor , we decided to do this collaborative post. The writers will be Chris Anderson, guitarist/singer/composer for Firesuite (check ’em), Tonan and Sam.

Me? I didn’t get any EPs but I got the cookies. Booyah. It pays to be a cow.

I came to Thrice late. I was aware of them of course, as I was listening to plenty of shouty American rock at the time. The Artist In The Ambulance was out, but never really struck me.

It sounded too stale and generic so i roundly dismissed them. It wasn’t until waaaaaaaay later, way after its release in fact, that I listened to Vheissu and heard a band that wanted to be “more”. They had clearly drawn from different influences, there were dashes of electronica, a much more genuinely aggressive feel and a sincerity that made me re-evaluate them.

The interviews I read with them at that time were articulate and interesting. I kept tabs on them, and sure enough, I heard of their desire to create a 4 disc effort, with a disc dedicated to an element a piece…Now, I’m a gentleman who dabbles in a touch of prog, but this sounded a bit too Spinal Tap to be true. It wasn’t until Fire came out that I was sold.

A sample conversation I had with a friend at the time of its release went a little like this :

ME – “…but then they started getting pretty good, after they somewhat predictably name checked Kid A in all their interviews as American bands all started to do at the same time…”

ME – “Well, they’ve just released the first disc in a four disc affair, where each release will “represent” an element. It’s called The Alchemy Index and it’s fucking BRILLIANT”.

Suffice it to say, however hard a sell it is, for me, the first two volumes of The Alchemy Index are the very best work Thrice have done. Fire and Water are two EP’s, released back to back and are just astounding.

From the opening bars of ‘Firebreather’ onwards, there’s nary a blip in quality. The influences and how they’re incorporated really brought the thing to life. The heavier side of the band was harnessed brilliantly in the opening disc, ‘Burn The Fleet’ in particular sounding enormous. After buying the record, I would listen to it whilst walking to every band rehearsal we had at the time.

Water, for me, is a high watermark in terms of songwriting and execution for the band. The EP, from start to finish is just beautiful. Thrice talked up their love of Radiohead et al during the press run for The Alchemy Index, and whilst that influence is not explicitly apparent, you can tell that they have attempted something here. They have stepped outside their comfort zone and embraced new sounds and it pays dividends.

The crunch of ‘Digital Sea’ and the chorus as it takes off. You can usually tell the quality of the work when you gauge how jealous you are when listening to it, and every time I listen to ‘Digital Sea’ I feel a prickle of envy I didn’t write it. ‘Open Water’ too, opens with a heavily electronic sound that bursts into a huge chorus, again dripping with imagery, yes ocean related, but never to the detriment to the work. I love the lyrical things that Dustin Kensrue addresses in the EP, particularly in ‘The Whaler’, a song clearly about his young child. The reverb drenched piano in ‘Lost Continent’, with its hanging chords at the end are just heartbreaking. ‘Night Diving’, the instrumental track, embraces chorus and all manner of other guitar effects to create a suffocating wall of noise throughout and leads into ‘The Whaler’, another song I would kill to have written myself, just a gorgeous, gorgeous song.

It all ends with ‘Kings Upon The Maine’, perhaps not my favourite thing on the EP, but another song which is atmospheric and suffocating in its own way. And there it is. One of my favourite things to have been released in recent memory, if not for ‘Digital Sea’ and ‘The Whaler’ alone, which are two reasons I’ll always be interested in and listen to Thrice. You should too.

This is indeed a “to be continued (…)” kind of album, as a whole, that slowly calls for your attention, explaining through a basically visceral perspective what every natural element is made of and what it represents in our individual context, and it is the turn now for one natural element that insinuates delicate freedom to finally release ourselves from the ties and heavy burden of the earth.

The Air EP is like silk. You can hear it through the leaves of trees when it gains back its strength, it can move from bells to houses, and you can feel it too running through your skin but you will never see it, like reasons for living and passions; it is also a primary engine to life. It is the quiet presence that keeps the world on moving and it even has a soundtrack of its own.

Six songs are included in the 3rd part of Thrice’s The Alchemy Index. This volume is Air (literally), as sounds travel through air and wind and it is loaded with feelings of its own to awake our very own contexts. Thrice managed to translate this idea into their tunes flawlessly.

The use of bells, sounds of wind and crystals are the counterpart to the vigorous riffs the band creates for songs like ‘The Sky is Falling’ or ‘Broken Lungs’ (the first two songs, actually), and become a dialectal motion as to represent a struggle to leave all bounds that keep us on the earth, like those nightmares involving the need to fly and failing despite our best efforts. Syncopate riffs, genius and powerful bass lines complemented with ambient effects and vocals mirroring desperation are the vessel chosen to convey this message.

While the unknown experience is anxiously awaited, the rest of the album makes us feel like heaven and Air became our home. There are sound effects of the wind going through our ears; we have become observers from above (‘Milly Michaelson’). Even when leaving the earth may seem the solution to go, our thoughts and feelings are still rooted in ourselves, so our perspectives may change. ‘Daedalus’ is the perfect proof of that: even when our spirit is up above, there are still things that haunt our souls, not to mention the whole legend of Daedalus and the horrible things that happened to him.

The end of the album decided to give peace to this journey through ‘As the Crow Flies’, giving smooth electronic effects and echoed vocals in ‘Silver Wings’, and making of this experience a rather nourishing one. It’s just amazing what an album can bring to our hearts and minds, leave alone the capacity of this band to adapt themselves to any context or style they like, giving away to their audience creations so unique as a snowflake. Creativity, a concept so underrated nowadays (…).

I sincerely didn’t know what to think of this EP after getting too addicted to the other three. It was for a time a sort of “ugly duckling”, the unplugged bit of the whole set. I usually love acoustic stuff from loud bands, but I was trapped too firmly on the grasp of the other three elements.

My love for Earth came from an unlikely source. I have a friend that is superfunny and possibly one of my best friends but he’s very strict (i.e. mamón) with music, film and art in general. Last December, I lent him my copy of The Alchemy Index and every time he came by on his car, the EP was playing. It was in Mexico City, mid december. Christmas shoppers, families in minivans, traffic everywhere. So we listened to them a lot. I knew all other three by heart.

Just like the Grinch, my heart grew up and warmed up to Earth. The dry, straight lyrical work is simply wonderful. “I don’t know the first thing about love”, croons Dustin Kenrue in ‘Moving mountains’.

After several sightings of cars sporting reindeer ears and noses (swear this is true) and conversations about several themes (long gone friends, life, uncertainties), it hit me: this is Thrice at its most honest. No studio shenanigans, no effects. Acoustic purity showing the naked souls of four musicians. The slow jazzy ‘Digging my grave’ is a “hug your loved ones’ sort of affair, the gloomy piano by Teppei Teranishi in ‘The Lion and the Wolf’, the almost-rock of ‘Come all you weary’ (and its religious undertones) and the solemn ‘Child of dust’. They all are gems waiting to be heard. Love the cover of Frodus‘ ‘The Earth isn’t humming’.

Earth shows how Thrice do write with their heart on their sleeves, emotions seeping through and falling into the bits of paper where their wonderful music is written.