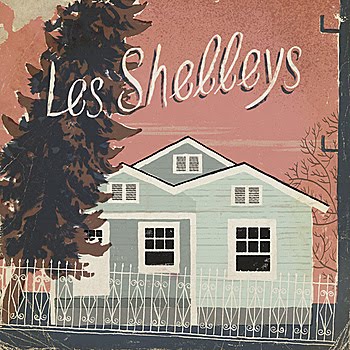 It’s again that image inside the old music school I used to attend 11 years back. Every Saturday morning, we had this class where we were supposed to learn how to analyze music and every single sound coming from a song, opus, etc., then give it a name and assign to a specific period of human history, and it was definitely a time where you feel like sleeping rather than listening to music; one day and out of the blue, there was this magic in the air and I soon realized my classmates had closed their eyes and moved their heads to the sounds of music from the 20’s and 30’s, the one that proves once upon a time emotions were just emotions, no pretensions attached, just a transparent river running under a blue and clean sky.

A simple acoustic guitar, then 2 voices floating with naïve flair embodied with the statement ‘The world is waiting for the sunrise. Every rose […]’, and this is the first track of Les Shelleys’ homonymous album, ‘The World is waiting for the Sunrise’, which is a good introduction for what we, new fans of Les Shelleys, can expect from them. There’s tenderness, and this image where everybody feels free to express whatever comes to our minds, and surrender to the sound of times where no malaise was so rooted as today’s.

‘Late John Garfield Blues’, the second track: storytelling as our ancestors would pass knowledge, lessons, legends from one generation to another, verbal tradition accompanied by one of those languages that would endure: music. This tune is rather nostalgic, both male and female voices follow evenly, and from time to time each one gives a high note or a contrast, as to give the scream or emotion we would expect from an excellent storyteller. One guitar, two voices, it’s just enough to close your eyes and melt with the story.

Back to that memory involving the music school I attended, the next song would be the moment where the class continues and suddenly we students would smile (even though hangover was a common symptom among the poor adolescent souls): confidence, snapping, making rhythm just with little claps and again those two voices that would steal a smile from the saddest man / woman in this world; a merry tune that would not need any sophisticated equipment or engineering work to sound just perfect. The talents these two display with every song really amazes me. This song is called ‘Green Door’.

‘Cocktails for Two’, the fourth track, and this is again travelling back in time to realize how love was sung at those pure times I’ve tried to describe with so much emotion: tenderness, just loving to be loved back. Tom Brosseau‘s voice becomes the lead, the music is produced again only with an acoustic guitar and male and female voices seem to tangle in the chorus, as in the action of tangling our minds in longing. Lyrics are especially beautiful in this one.

The next song works as a counterpart, where the main vocal duties go to Angela Correa,  the other 50% of the band. There’s a country air in the notes sung, and 50% of the magic comes in the shape of the acoustic guitar. I’m definitely convinced now that there’s no need for hi-tech in music when there’s so much talent as this. The structure of this song would remind me of waves, always in wandering to-and-fro.

‘Rum and Coca Cola’ is definitely worthy of a 40s advertisement; it’s true this art of selling is not the most honest created, however, there’s an irresistible naïve air that pictures a tropical landscape, women wearing discrete bathing suits, clean oxygen, like memories that will remain printed on matte paper.

After the two voices of this band showed off separately, ‘Billy’ presents the perfect complement these two have in their vocal abilities. An elegantly simple guitar riff that unfolds in the fashion of old school music and two voices that talk about hard lessons, describing innocence lost during a lifetime: “Billy, they don’t like you to be so free”.

‘The Lonesome Death of Hattie Carroll’ is yet another song I loved. It definitely pictures through the rhythm and narrative a scene worthy of Al Capone’s taboos, like the songs describing legends, stories with a moral. Lyrics may be hypnotizing.

‘Oh Babe, it ain’t no lie’ is a delicate voice singing in love, with harmonies from a soul raised in the countryside. There’s moments where it can be witnessed someone’s singing his/her heart out, and this is definitely one of those sweet moments. I strongly recommend this one to remind and still believe there’s true in people’s words.

‘Pastures of Plenty’ is introduced by an awesome guitar riff with a circumstance implicit, nostalgia in music that matches the lyrics. This is a kind of kingdom that would belong to my grandparents’ times: always working for a living as there’s no other way to survive, combined with this incredible sense of belonging to one place, to a land, like the ultimate identity definition where the soul and will were tied to the place of birth.

After the blue there’s ‘Deep Purple’, as to say sunset and dreams. The music seems a preparation to take off with the one we love, but still unaware of being loved back. Uncertainty brings always the utmost of our inspiration as well, and this penultimate track is a living proof for that.

The end to this travel through time comes with ‘Wheel of Fortune’, and this is to prove the power of words and life lessons, as wisdom sung. The guitar solo presents colorful and bright notes, while female and male sing old tunes and styles of the 40s.

This Les Shelleys album really left me wondering of what has been forgotten through the “evolution” we’ve got in all senses. Sometimes we just forget the basics, the foundations that keep this buildings standing tall.

There was a time where it was easier to express ourselves, where the art of listening was implicit and lessons were wisely passed on with music, one of the Arts that makes things even harder to forget.

I’m truly touched by the magic naïve character of Les Shelleys, they really know how to make a good display of true talent and remind us there were times and places in this earth with blue skies and clearer water, the ones that reflected our feelings in the most authentic and fundamental shape.

You can read a review of one of their gigs and our own interview.

One thought on “Droplets of Nostalgia”

Made a new friend. #caterpillar
Educational toy. Or a depiction of the digestive tract of any sea faring animal.
#apricity
New loaf tin. Came out good.
Turning a new leaf. Or several.
Join 4,428 other followers