I have a funny story with Electric Six. I can’t stand their most-known hit (you know which one) as it got overplayed (and I still say it’s Jack White doing the voices) ’til repetition-saturation point. One fine day, I got Señor Smoke because it was cheap, it had a Queen cover (just go with it) and I needed a laugh. I loved the album, so much that I went and bought Fire and everything afterwards. In less than 1 year, I was an acolyte of the band and their skewed humour.

Seeing them live is always a fun experience (my first time, in 2009, they had Tragedy opening for them). So it was a massive honour to finally meet the funny man himself, Dick Valentine, and see how far could he pull my leg. It all started when we met at the Academy, before their December 2010 gig. We sit in an area with sofas and he laments that there are no tables where we at. I ask him why, and then he shoots “because then I could turn the tables on you”. All this, with a sly grin. He asks me where I’m from and after that, what I’m doing in England. So far, Dick Valentine has fired the first questions. Tables have been turned…

Dick Valentine (Electric Six) : So what brought you from Mexico City to Sheffield?

DV: But then they kicked you out?

S: No, I’m still there. I got kicked out of the newspaper.

S: Well, actually I kicked myself out, got bored of getting edited all the time and in a website there’s no word limits. So I’m not being edited. For good or for bad.

S: And then I feel like the stupid cousin of Chuck Palahniuk. Or Chuck Klosterman. Yeah, that’s the music guy.

S: Yes. That’s true. We should chuck one Chuck.

S: Two Chucks. Because they can chuck wood.

S: Now that we got the boring questions out of the way, let’s go for the usual ones. How are you?

S: You’ve been coming to the UK on tour a few times, what do you feel about the reception you get here in comparison to the one you get in the USA?

DV: Ah, the crowds are a little younger over here. People in the UK are more excitable, I think. In the US, they are more nonplussed about by people in vans, whereas in the UK they tend to go: “YOU’RE A LEGEND!” and you have to deal with that, and coming from an American perspective. And there’s also more close contact, like bearhugs over here. When somebody’s taking your picture, they’ll pull you in really close in and you can feel their breathing, whereas in the US there’s the personal space issues that we have.

S: Cool. Regarding the new album, Zodiac, how is it doing? Any news on reception or sales?

DV: Sales are always the same, kinda, well, we take what we can get. It has been that way since Señor Smoke. Everyone in the band thinks it’s one of our best albums and a lot of hardcore people that are into the band say it’s one of our best, so we try to improve album after album. 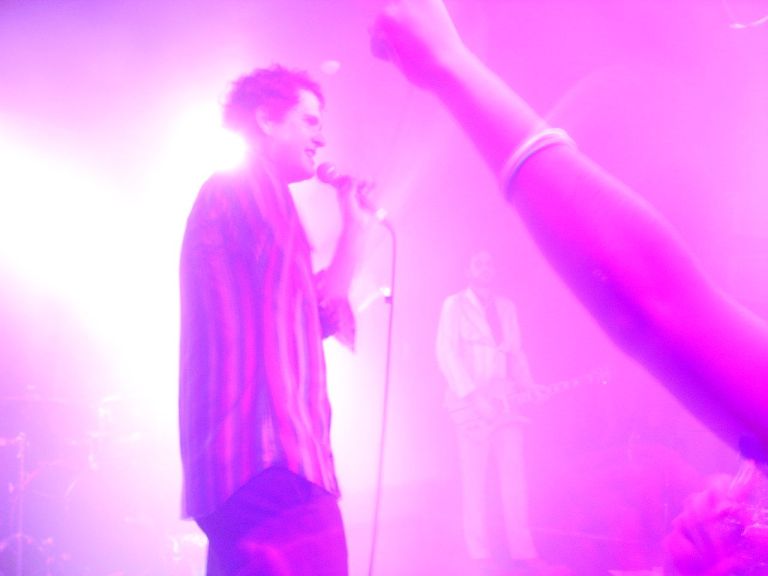 S: Speaking about albums, you mentioned that for Switzerland you were trying to do a video for each song and so far you got 8. Any plans to do the final 5?

DV: Oh, hell no! It would be a victory if we’d played ‘I wish this song was louder’ live, because it’s one of my favourite songs from that record, we’ve never done it. So regarding Switzerland, that would be the more attainable goal. As far as videos go, we did the complete 180 from that: “yeah, it’s the way to go” and made a bunch of them and realised they don’t do anything for you, so we are at a point that we will only make a video if we feel we have a good idea, instead of stressing ourselves, so that’s why there’s no video for Zodiac, as the window of time we had for making a video, we  all were on vacation and no one had a good idea, so, no video.

S: Yeah, and you could end up getting censored, like with ‘Body shot’.

DV: Oh, that was intentional! It was part of the same argument, it was after what we thought were good videos, like ‘Formula 409’, those were good videos but they didn’t do anything for us. You put them on Youtube, throw money and the best thing it could happen is that people would write comments. “Love this band!” “This band sucks!”. So why are we spending so much money in a video if that’s all we’ll get? So we figured out with ‘Body Shot’ that we do something that hopefully people would forward each other and say “this is something ridiculous”, and that didn’t work out, so now we are “why would we bother doing a video”?

S: Now that we mentioned videos, was ‘Down at McDonelzzz’ a parody of rapper videos?

DV: Ah, a little bit. Not a lot of thought went into the song or the video, maybe some hip hop. The song was inspired by, you know the website, The Onion?

DV: There was an article, a spoof article, that the downtown Oakland, California McDonald’s is the closest thing to purgatory on Earth, all this hip hop people outside. And the trash is spilling out and it’s complete chaos, so that’s the inspiration for that song: a hip hop McDonald’s. (link)

DV: I don’t really …ah, you’re asking the wrong guy. People always ask me to do a top ten list and I just don’t listen to music.

S: It doesn’t have to be from this year.

DV: It seems it was a bad year. It used to be that you could come over to the UK and see “this is the new favourite band”, “this is the new Arctic Monkeys / Klaxons / Whatever”. I don’t have any idea which ones are the big bands now, who’s getting all the buzz, it just seems like it’s kinda dead right now.

S: And then everyone is compared to everyone before and there’s no one left.

S: Do you have any news about your project, Evil Cowards?

DV: Well, it’s slow but surely moving. The only criteria is that we want to keep it a side-project for the both of us, so, we have a lot of songs tracked, a few songs mixed, but he’s been really busy starting up his own business, so it’s taking all of his time. The plan now is to getting done by next Spring. We really want to do it, but neither of us wants to stress about it. It’s like videos: there’s no law of “you have to release two albums a year”.

S: Cool. You’re doing the music for a machinimia webseries called Bite me. How did that collaboration came to happen?

DV: The guys who wrote and produced the show were both fans of Electric Six and Evil Cowards. The timeframe they gave us, well, it made sense to do it in New York, so I could have enough time to do it, write five songs in ten days, knock ’em out. Hopefully, there will be more work. I like the series, so I think and hope I’ll continue to work with them!

S: From all your discography, do you have any favourite album?

DV: I love Flashy, it’s my favourite album. I think Flashy got the best songs, like , “oh yeah, that song is so flashy!”. Actually, I got them on Itunes and I had them in alphabetical order and there is this song that starts with F, I think “it’s ‘Facecuts”, and I go “Yeah! I love that song!”. So we put it in. That’s another reason I love that album.

DV: Yeah, we talked about doing another album or take a year off. I take January off and then see if we have any songs. The only thing I’m sure of is that we are touring Canada in March.

S: A couple of people in the site, including me, are fans, so we have a fan-nish question. First one, from a friend in Detroit: “Do you have any favourite rock clubs in Detroit”?

DV: Oh, I been living there for seven years and I don’t go out that much. I’m about to turn 40 so I don’t… I used to love ‘Flaming  Old Dollar’ but that hasn’t existed in a long time. I like ‘The Belmont’.  But as far as one being better than the other, I’m just more familiar with other parts.

S: So, what’s a day in the life like in an Electric Six tour?

DV: It’s really boring. REALLY BORING. We don’t do drugs, we all are pretty much in committed relationships, so, those were the two things that could make touring exciting: sex and drugs and we don’t do either. So it’s all about eating and sleeping and showing each other funny things in our computers, go “ha ha ha ha ha!” and then wish we were home (laughs).

S: Any plans to go to Mexico?

DV: Mexico? Going in a family vacation to Cancún. I’ve never been to Cancún.

S: Try to get to XCaret, it’s pretty cool.

S: XCaret. It’s about 40 minutes from Cancún. But everyone will sell you a ticket to get there, so don’t worry, can’t miss it.

DV: What you have to understand is that my relatives are all Fox News people, so they only want to stay in the resort and never leave. They think they might die (laughs).

S: I’m paranoid too, I live in Mexico City.

DV: Yeah, well, if you live in Mexico City, yeah.

S: From a friend of mine, she says: Do you need a groupie?

DV: Do we need a groupie? Now? Maybe, maybe that’s the next thing forward for us. Maybe we will, we don’t know it. But in the surface of things, no.

S: If accepted as a groupie, what would be a day in the life of an Electric Six groupie?

DV: She would constantly question herself what she got herself into. She would probably abort after 24 hours, she’d realise she was on a one way ticket to nowhere.

S: Do you think albums are dead?

S: That’s pretty much it!

DV: That was pretty quick!

S: Now you got one for ‘Germans in Mexico’.

So we gave Dick Valentine a cool Mexican flag, which hopefully he didn’t deface or burn during their gig at the Academy, a gig I sadly missed as  some problems with my Mexican credit card meant my ticket got lost in cyberspace. Still, managed to get this interview, so it still was mission accomplished.