Interview – LL Schultz (Down the lees)

We (ok, Sam and Quinto) catch up with the multitalented LL Schultz and grill her for all things music, DIY and nineties for your reading pleasure.

If you need music with yer interview, just press play.

Before we start, thank you very much for donating a song for us. I do have some recollection of having seen a video for Queazy in Mexico way back in the 90s…

You are welcome and awesome!

1.- Tell us a bit about yourself and your many projects.

My name is Laura Lee Schultz (LL) and I have played music since I could walk. It all started with the desire to acquire a child’s drum kit from the Consumers Distributing Catalogue that had Animal on the kick drum. Since I didn’t get that for Christmas, EVER!, I had to settle for guitars, an organ and a recorder. Fair enough. I played all those instruments in many bands. Down the Lees, New Years Resolution, Ep Island, Singleseven, The Skinjobs and Queazy. And now I have a room with a bunch more instruments where I record as much as I can, hoping one day to strike it rich in film and television. Here is my fancy new website: http://www.lauraleeschultz.com

2.- Tell us more about why you decided to engineer and record your stuff in your own studio. Is it taking the DIY attitude into practice?

Well, it was in the 90’s when I decided to take matters into my own hands. I was in Queazy, playing shows with Pure, the Pursuit of Happiness and appearing on MuchMusic with Sook-Yin Lee. It wasn’t all glamorous though. I also lived in a crappy bachelor pad that was the size of a bathroom stall. But, I got my hands on Pj Harvey’s 4-track demos CD. It opened my eyes! “I can do this!” I said to myself. So my friend gave me a broken down TASCAM Porta 03 that only recorded 2 ½ tracks, and I holed myself up for years fooling around and recording my first demos. I loved it! I have always had a strong DIY attitude. 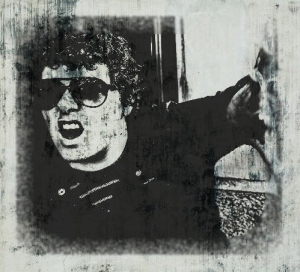 3.- Any bands you’d recommend us from the Vancouver scene?

Off the top of my head – Portico, Wintermitts, Hannah Georges, The Abramson Singers, Bison BC.

4.- How did the “Lez Renovate” show come to happen?

Well, my girlfriend and I purchased a house in December of last year. We knew that we were going to have to do a crap load of work on it (being 80 years old) so we decided that we would document everything we were doing, mainly for our families to keep up-to-date on the project. We had to completely gut the basement and renovate it into a 2-bedroom suite to rent. It started with a blog and then we added videos and before we knew it, we had a fan base.

Then, in the first season, the website Afterellen.com got a hold of us wanting to syndicate episodes. Crazy hey? When we started the reno’s, we pretty much had no idea how to do it! It has been a learning process, completely. Except for the music in the episodes. That’s a snap! But I also had previous video editing knowledge because I co-wrote/directed a short film call Chronicles of Daydude. That was a great tutorial on how to create a story in a short timeframe. Making the Lez Renovate videos has been totally fun! Season 2 just started and we are building a jam space. http://www.lezrenovate.com

5.- What’s been playing in your stereo lately?

6.- What do you think about the current wave of female singer and songwriters?

Well, I don’t think that is a wave. I think gals have been doing it for a long time but haven’t been getting much press. It’s still hard to permeate through the thick skin of testosterone that is the music industry. But I’m super happy to see more and more gals make it through! 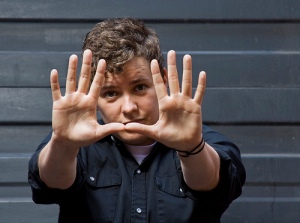 7.- Amongst the several projects you have in your plate, there’s one that caught my ears. Tell us more about EP Island.

At first it was for selfish reasons. The drummer for my old band New Years Resolution, Melanie Covey, almost hung up her sticks. Since I totally in love with her drumming and we missed playing together, we decided to amend the typical band relationship rules. I have always loved the inception of a song. How it feels, what it sounds like and the energy that is put into it. Too many times I have over-worked a song and by the time it comes to recording, it has lost its shimmer.

So, Mel and I came up with the concept of writing and recording as many songs as we could in one weekend. We wanted to capture that shimmer. So, two 3-song ep’s later (Good’ish, Rad’ish) we can safely say that she won’t be hanging up her sticks anytime soon! http://www.myspace.com/episland

8.- Quite a few musicians (specially people doing stuff DIY-style) seem to be embracing Bandcamp and Spotify. Do you think the online community are more open (and supportive) and is this sharing beneficial for you?

I love Bandcamp. The interface is very easy to work with and the mantra behind their site is very DIY. Not taking from the artist, but helping the artist. I used it for the last EP Island and most recently for Racconnery!, a play that I co-wrote the music for. http://www.morganbrayton.bandcamp.com

9.- Few people can genre hop like you do, going from poppy stuff to introspection (‘Boy or girl’) to some serious distortion use (EP Island’s stuff, Dtl’s Jekyll hearts Hyde and Anti-multi Stall). Can we ask about your influences? Not only in music, but film and books.

Well, I think you pegged it when Sloucher reviewed Down the Lees as “A true survivor of the 90s”! I am. Let’s see, musically – Pj Harvey, Team Dresch, Drive Like Jehu, Sebadoh, the Pixies, Bjork, Unwound and Versus. But also Cocteau Twins, Queens of the Stone Age, Elliott Smith, The Beatles and numerous other genius’s. I remember reading Rule of the Bone by Russell Banks and thinking that it would make a great movie and that I could write the music for it. Seems quite fitting. And tv, well – Sesame Street, all the way. Animal was my first introduction to crazy drumming!

10.- You’ve mentioned you’ve done opening duties for bands as diverse as Xiu Xiu and Minus the Bear? Which has been your favourite band you’ve supported?

Oh geez. That’s a hard one. Mainly because a lot of it is a blur! Xiu Xiu was exciting, although poorly attended. It felt like a secret. The Rose Chronicles was back in the 90’s (of course) and that one sticks out for me. I was in Queazy, and my vocal warming technique was quite different from Kristy Thirk’s. Our green rooms were right beside each other. I could hear her warming up, singing scales and reaching notes that I didn’t even know existed. Meanwhile, there I was, in my green room, warming my throat by belting out the loudest screams you could imagine.

11.- Any particular live show you’ve enjoyed the most in your career as a musician?

Well, there have been many. Let’s see, Queazy in Saskatoon playing to an audience of 0 so we just played the theme to Friends with the other band (The Sweaters) over and over again, The Skinjobs playing Homo-a-Gogo in Olympia with audience members filling the stage, New Years Resolution playing our cd release party and selling out of merchandise, or the Down the Lees solo show where I created a 30 min animation that played behind me as I improved the soundtrack. Hmmm…..it’s hard to decide. 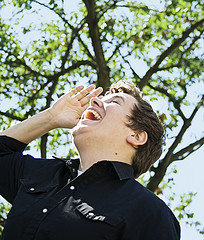 Well – I used to rock the Metal Zone (Boss) but now I’m all over the place. I have a plethora of software plug-ins that I play with all the time. I work with Logic Pro and the amp simulators are actually pretty good, especially through an amp.

13.- Besides your own musical career, you’ve done some music for shows, more recently Racoonery. How is that one faring up? What attracted you to it?

Yes, I have also been writing music for film/tv, and Raccoonery! was the first adventure in theatre. I have been a friend of the creator for some time now, Morgan Brayton, and she asked me to be involved. She is such a talented and funny lady. I couldn’t pass up the opportunity to work with her, so we did. It received a Critics Choice at the 2010 Vancouver Fringe Festival.

14.- Tell us a bit about your experiences with the recording of 360 ¼ degrees and The guest room? Different sounding albums, but still good in their own terms.

Well – 360 ¼ Degrees was my first solo album. I was determined to write and play all the instruments on the album. I had enlisted Blair Calibaba (Propaghandi, NoMeansNo) to record the album. It was such a great and humbling experience. The Guest Room was a different story. I wanted to write and record the whole album myself but decided to invite my lovely musical friends to lend their talents. Lyn Heinemann (Portico), Melanie Covey (New Years Resolution), Lise Monique (Wintermitts) and Mimi Mahovlich (Portico) sprinkled their attitudes all over the album. It was so fun! Shawn Penner (Mother Mother, Hot Hot Heat) and I mixed the album at Mushroom Studios.

15.- Not implying that they sound dated (because they aren’t!) but ‘Jekyl Hearts Hyde’ and ‘ The Gallivant’ take me straight back to the autumn of 1994. What’s your memories of the 90s music scene?

Of course they sound 90’s! I grew up musically in the 90’s. What sticks out for me are all the mix tapes that I made and were given to me. There was an art to making the best tape. I loved it. Still do. From hand drawing on the cassette front to picking songs by theme, vocal content and length was very important. Especially length. I made sure that no songs were cut off at the end and even went out of my way to ensure that when the last song ended, all you had to do was flip the tape over and the next song would start right away. I know, I’m a nerd.

16.- There are times in your song when anger really seeps through, without ever coming as a scream, it still feels energetic. What drives you mad?

People who don’t take responsibility for their own actions drive me mad!

17.- Would you encourage more female drummers to use Spiderman’s head as a snare? (also, where can one get a physical copy of Queazy? It’s harder to find than Black Jack gum!)

Hmm – to be honest, I don’t use the Spiderman’s head so I can’t even comment on that. But I can comment on the Queazy. The album is hard to find, no one is selling it right now. But I’m going to look into fixing that. I know that I only have a couple copies.

18.- We’ve recently suffered a major infestation of nasty, scheming squirrels at the website. Any suggestions to get rid of these fluffy pieces of vermin? (Joking aside, I applaud you for battling with wasps, I’d would just burn the house and leave without a forwarding address).

Just wrap yourself in duct tape and giv’r!

Thanks, LL. Massive respect to anyone who likes Animal . He is the best Muppet.