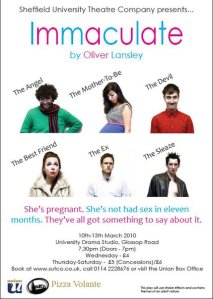 There, said and done. I hate the fakeness of it. I hate the “sparsity” of it. Calling an actor “theatrical” is easily my fave insult and the BBC sure has a knack for having “theatrical actors” in their ranks. The same damning that makes Mexican actors shit.

So, yeah, I avoid theatre like the plague. And don’t get me started on musicals. Shit, please, drill my eardrums and drop some Tesco Quality bleach on them. I’ll take that over anything that Lloyd Webber or Stephen “The Master of Dissonance” Sondheim crap.

With that in mind and hopefully waiting for half the audience back home to recover, I’ll tell you about how I ended up watching a play.

One of my friends (and the official Spammer of Sloucher), called me on Thursday. Besides telling me of a girl he hooked up with at Northern Soul (the kebab joint in Fulwood – tell them Quinto sent ya!), he was ranting and raving about Immaculate, a play in Sheffield University’s Drama Studio.

“No mames, cabron” I said to him.
“Really, dude, it’s like an episode of Family Guy” he argued.
“Hate the show”.
“Ehrm, American Dad?”.
“Cool, I’ll go there tomorrow. Wait, is the girl from Northern Soul the one that looks like Marissa Tomei?”.
“Yes, Quinto, why?”
“I called dibs on her. Get your filthy hands off my dessert!”

So, Friday show. I see my pal with two Spanish girls and decide to stay in the shadows, like the mysterious wanker I pretend to be. Theatre, Christ… I should be in Bungalows and Bears, waiting for that Liverpudlian Lillith (call me, flaxen haired girl with the white flower!) I met a fortnight ago, but no, I’m in a fucking theatre.

Final call and I’m thinking of just sneaking out. A pre-recorded warning starts. “Keep your hands and legs inside the theatre”? Right-o, I’m amused. Throw some stuff my way.

And, hey, you know what? I still hate theatre but this was fucking entertaining.

This is what “Immaculate” (written by Oliver Lansley) is about: this girl called Mia (who sort of works in the way Billie Piper works in Diary of a Call Girl) who totally looks and acts like Jen (from The IT Crowd) gets knocked up by that randy bastard, The Holy Ghost.

Or so says the archangel Gabriel (some funny git called Sean Linnen – gotta do some shots with the guy), also looking like a character from The IT Crowd (Moss, for anyone keeping the score), to the hapless mother to be.

Now, don’t think that all characters in the play remind me of TV characters. That’s the way my brain ticks. Deal with it.

Anyhoo, there are other possible suspects: Michael (Dom Gee-Burch – hellafun) a clueless exboyfriend (who everyone but him knows he’s out of the question), Gary Goodman (Stephen Hall – a thin Matt Berry) an extremely unpopular Liverpool supporter and Old Hob himself, Satan (played by Nick Birchill, who, incidentally, has the best portfolio case I’ve seen in ages).

The big problem is that dear ol’ Mia (the extremely likeable Sonia Jalaly – give yerself a congrats hug) hasn’t shagged anyone in more than a year, so either there is either a big order of “egg on face” for Richard Dawkins or someone is telling lots of porkies and has done the Nasty Tango.

The whole cast are fucking funny  and I had to see a, err, ‘reviewer’s copy’ of the script afterwards to go after the many jokes. I might not be a fan of dick jokes, but they worked here. Also, the religious humour is spot on (‘Fallen angel? I was pushed!’ bemoans a very swishy Satan before storming off the limelight) and the cast pretty much made me a believer in theatre (for one night, at least).

And last but not least, there is this character called Rebecca (Venetia Lambrick) who does an absolutely brilliant 4 minute rant (breathe, darling, BREATHE!). Too bad I hate flowers or I would’ve given some (they do that on theatre, don’t they? Give flowers to the stars?). Her character, a less-ginger version of Lauren (she seems to be bovvered about babies), was the collectible toy in this Kid’s value meal of a time.

Don’t delve too much into that last analogy. It was suggested by someone else here at Sloucher. Selah.

Kudos also to the SuTCo staff for an economic use of scenery (Satan’s portfolio case, desktop/bar combination FTW) and a firm handshake to Todd Baker, the director of this play. Baker seems to do a few spot on remarks about the whole “theatre: something to educate you” motif some smug people throw around. I came to be entertained and by Krist Novoselic’s goatee, I was fuckin’ entertained. So all take your masks (greek chorus ftw) and take a bow, you all bloody deserve it.

And yes, they are pisstaking at Liverpool fans. I should support my squad, but they deserve the kickin’. Lazy idjits.

Right, don’t expect any more theatre reviews from me. That’s my dose for a decade. Now, off to Northern Soul for a kebab and some romance, Quinto Styleee.

You want a trailer, don’t ya? Here it is:

Pay a visit to the cast and tell them it was good. Why? Because, it’s nice to do so.

About the author: In real life, the author actually runs from all people, whether real or imaginary. It’s the work of Isaac Brock from Modest Mouse. Really. Also, excuse the potty mouth, run out of menthol cigs and these clover ones ain’t doin’ it. And yes, YOU’LL NEVER WALK ALONE. Also: this is a fake name. Selah.