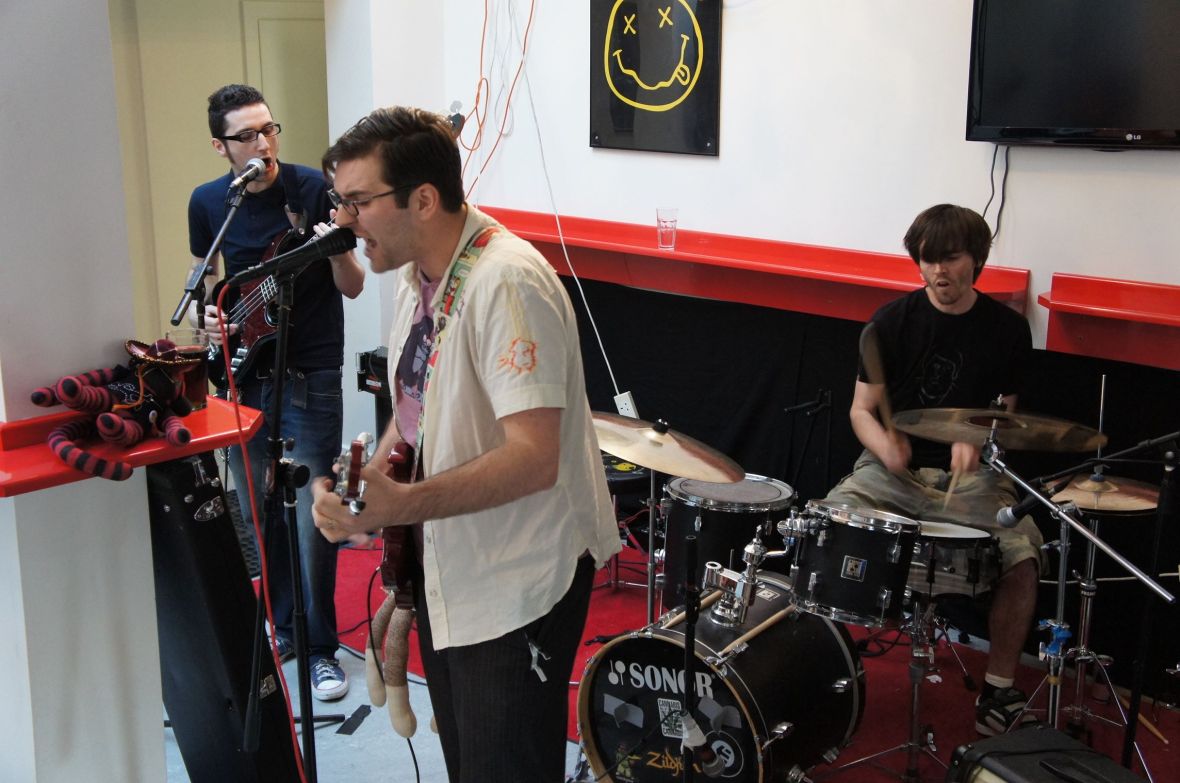 “The Proclaimers with Zac Effron.”

“Sorry, I’m lost. Would you happen to have a pouty band instead?”

“Who?” indeed. I mean this in a nice way. They had praise from Steve Lamacq. They had a great show at the O2 Academy. They gorged on Krispy Kreme donuts at DQ during Oxjam 2009. They always played their hearts out. They endured a barrage of insults from a loudmouth that ran a video competition. They had a sock monkey with sociopathic intentions. They liked rock, country, punk, and Johnny Cash. 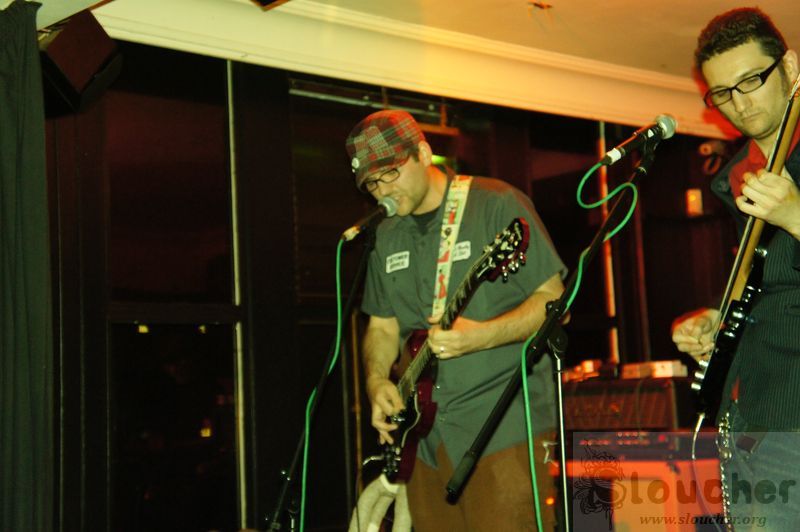 And they were mostly overlooked. Sitting far, far away from the people with the skin-tight pants, the winkle-picker boots, and the Zara/Top Shop skinny-fit, starch-heavy shirts, The Unfortunate Incident had the darkest humour. Think the Comedian in Watchmen (but less psychopathic): they could see through the bullshit and shrug at the strange tribes and pecking orders that blossom when a music scene is in crisis. Because let’s face it: the success of Arctic Monkeys did create a devious rip current that started to drag too many bands into a demise. See Harrisons, Milburn (who are back for round 2) and a long etcetera. 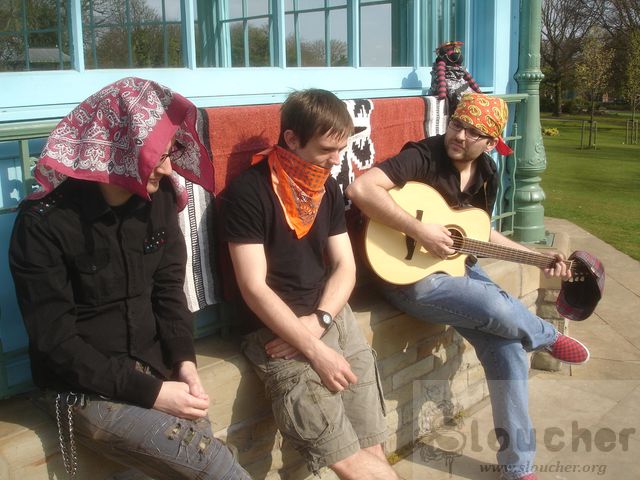 Indie music was fun. It comes from “independent” and I always wondered why so many Arctic Monkeys emulators tried to be so serious, so morose…so far away from independent. A millstone around their neck, forged in High Green. Sheffield Indie bands seemed to be having everything but fun. And although The Unfortunate Incident could seem to be a bunch of miserable guts that would make your friendly neighbourhood gloomy Gus say “daaaaaa-yum, son! lighten up!”, they had a lot of humour in them. Self-deprecating, acid and always on target. They knew it was all a folly, but still gave it all. Because if you’re going to judge, at least be good. 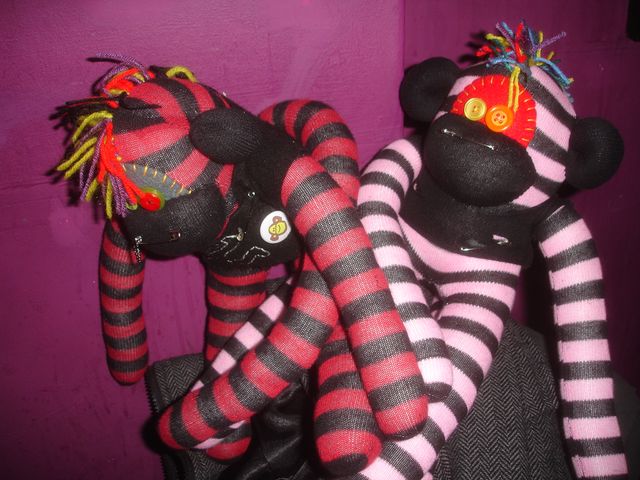 I met them through their drummer, Tom Wilks, back in 2009. He was friends with Chris, a friend from my MSc at the University of Sheffield. They gave me a CD and I saw them live for the first time on a very rainy night at the cemetery. The Sheffield CAMRA nights in September used to be there, and amongst the faithful departed, drowned in the smell of bratwurst and ales, The Unfortunate Incident rocked. I think Pistola Kicks were on that night too. But that’s a band for another chapter. 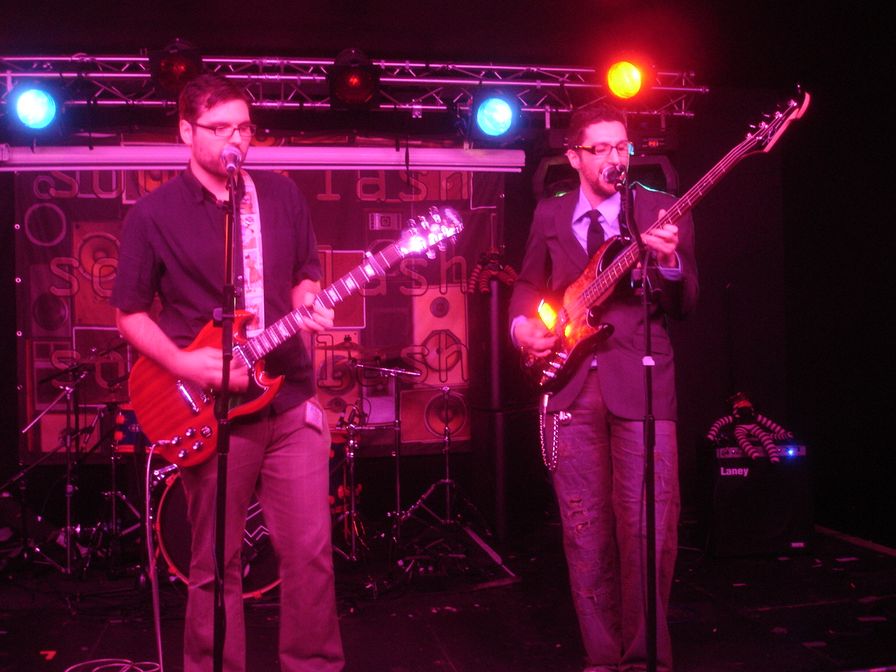 No flashy pedal combinations, no black and grey wardrobe. A drum kit that looked out of an Action Man collection. That was all they needed and used for as long as they were together. Their debut, Build Your Own Ark was like an all-sorts. Liquorice punk. Tangy 50s ballads. Whistlin’ and tootin’ cahootin’ country. At times, it could resemble a jumbled beast. Other times, it made sense: it was an antidote, a clear display that you could tackle as many genres as you wanted if only you stopped hanging out all the time at the fancy pub where The Shitterati used to hang. 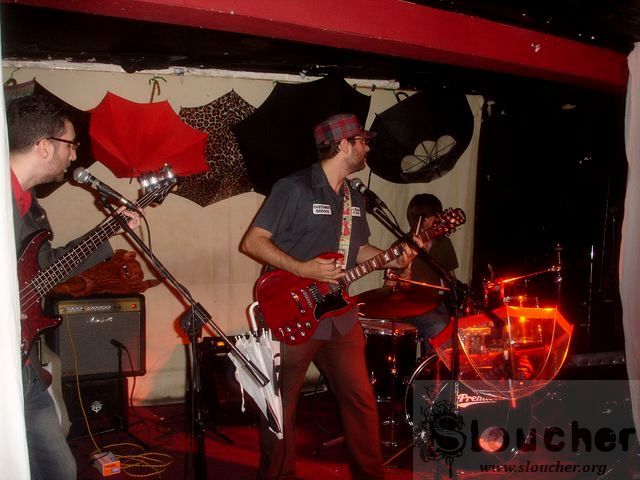 The Shitterati, Russell (vocals, guitar) coined that term to describe the Sheffield glitterati, who pulled the strings and bestowed the status of superstar to the morose and banished anyone cracking a smile or a bad review. Dan (bass) agreed and the brothers never went for the half truth approach. There was nothing diplomatic about what they said because the time for diplomacy was gone once ‘Dancing shoes’ dropped out of the top 40. 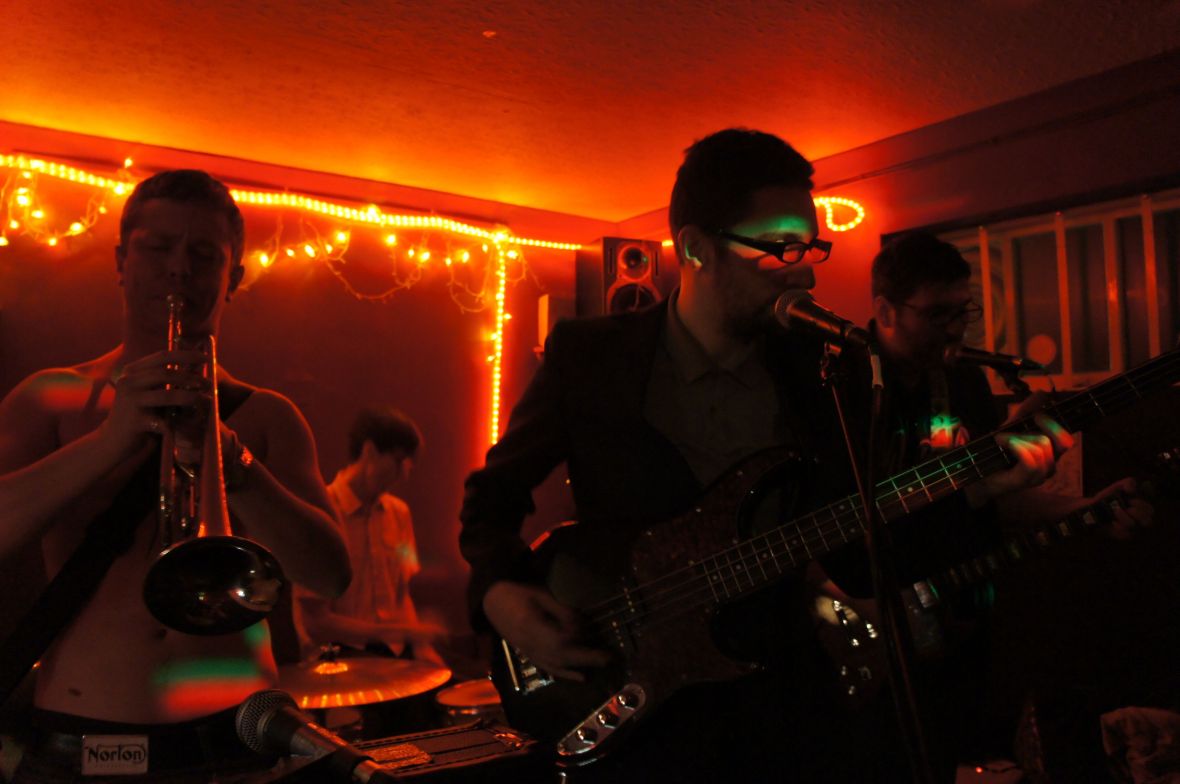 But I swear, honestly, they were a fun band. Tom eventually left and was replaced by Brian, who had a great project with Goodbye Good. Eddie Norton also joined during live gigs to play guitar and trumpet. This line-up was the one I got to see the most, rocking Soyo, The Washington and The Green Room. Last time I ever saw them live was at some godforsaken pub during Tramlines 2011. A dark comment about them being upstaged by Amy Winehouse’s death that very day flew over the heads of the crowd of pissheads and uninterested yahoos.

Another fond memory was getting invited to the video shoot of ‘Fool’, the lead single off their last EP, Fool. I was truant from Uni that day and went with my friends, Grace and Ivan, to the Lescar. Papier maché heads, toy props and a very shouty man who needs to chillax were all part of the day. You can see me in a couple of shots, on guitar, wearing a Rayados de Monterrey jersey with the words BIMBO on them.

The Unfortunate Incident eventually split up. There didn’t seem to be any build up, but a lack of gigs and of press coverage seemed to be a few of the factors leading to this. Russell sold me his guitar in early 2012, got rid of the amps and like that, it was all over. I usually saw him at the Fox & Duck, every month or so, where we talked extensively about life, music reviewing and Johnny Cash. He had coke with lemon, I had cider and peanuts. One of the few true friends I had in my time in Sheffield. I ran into Dan during a literary contest that went a bit bad, but that’s a story for another day. 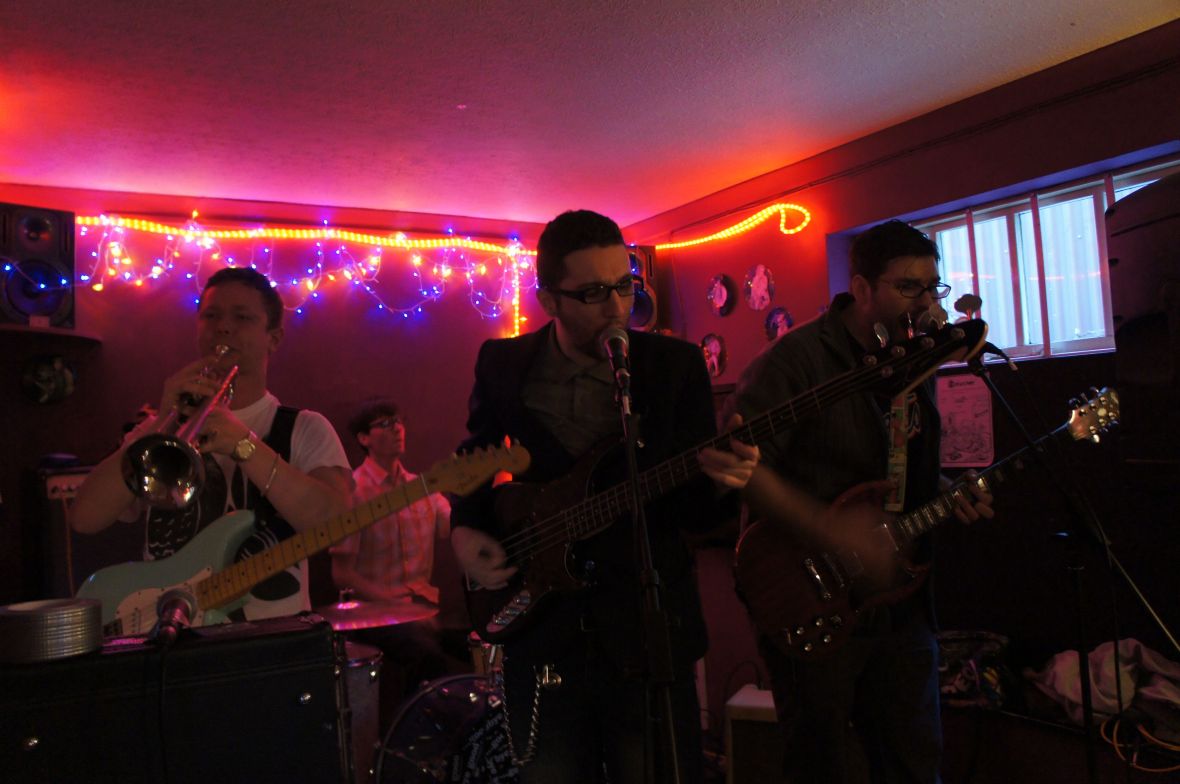 Would you accept being ostracised because you are being true to yourself? Because you will speak your mind? The Unfortunate Incident did and although I never actually had a close encounter with a Shitterati, I believe that sometimes swimming against the riptide will be the fastest way to a watery grave. Then again, if the shore is full of wankers, would you actually want to swim back?

And with that said… one bit of an interview that always made me chuckle.

Sloucher: Did you fell because of drunkenness or over-exuberance?

Russ: Me and Dan don’t drink. We’re the most un-rock and roll band in the world! Don’t drink, don’t smoke, vegetarian…

Sloucher: We’re sure you’ve done some rock and roll things, there’s got to be some juicy gossip in there somewhere…

Tom: (points at Russ) He ate a full pack of biscuits once

Sloucher: Which type of biscuits?

Russ: Rich Tea…
Daniel: we stole stuff from the dressing room once, we can’t say which venue obviously or they’ll never have us back…we stole all the food and cutlery
Russ: Yeah, nice cutlery…’Oh that’s a lovely knife and fork!’