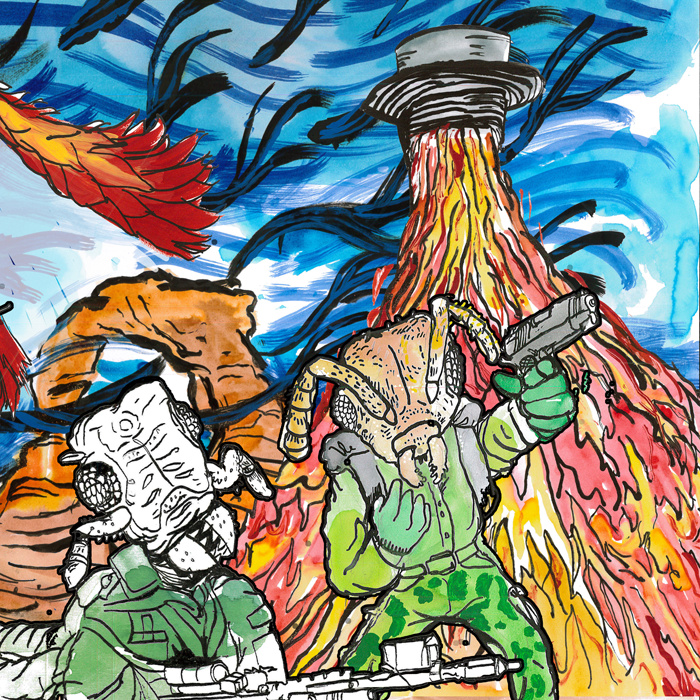 2014 has seen the return of many a thing that seemed dearly departed. Failure came back. Space Rock bands seem to be getting a good amount of love. Molly McGuire is back too. Yes! 18 years after the Ken Andrews’ produced monster Lime, Molly Mcguire release III, a brutal journey through the moors of Space Rock and Hard Rock. Joints might be creaky, there’s a few silver slivers in everyone’s receding hairline but those 18 years feel like 18 minutes after you listen to ‘Until you turn blue’, III‘s opening track.

That’s my meandering way of saying: welcome back, thank you for this and can I serve a double of anything?

A stiff drink is needed to numb the senses,  because III is overwhelming. Heavy drumming, hypnotic bass lines and a cornucopia of riffs will be offered aplenty. The opening trio of songs remind you of the carefree days when you last heard of Molly McGuire, and although you won’t fit those 501s and flannel shirts, you can still enjoy stuff like ‘Fat Lip’ without a notion of time. Mr. Allen Epley from the equally great The Life and Times guests in ‘Broken Phones’, cementing the Space Rock tag with a less “flying in space” and more “meteor shower” flavour of the genre.

Now, there’s an elephant in the fast spinning room we are currently sitting at. Actually, it’s not one, it’s two. And they are mammoths. And they are demolishing everything around. Two tracks, almost 20 minutes of pure, unadulterated hard rock. ‘Skinless’ throws everything at you: space rock, a furious solo and  a trippy ambient passage that cuts off into the brutal entry of ‘Curse Pt. II’, a song that fills its lengthy runtime with so many ideas your Eustachian tubes will feel like a daisy chain of Gordian knots.

Maybe Molly McGuire understood this, so the final tracks of the album are more straightforward, without missing any of the energy displayed. ‘Lee Marvin’ is hard as granite, just like its namesake. ‘One at a time’ wears a punkier, studded leather jacket. ‘Black Shoes’ is curt without pulling a punch and ‘Jaded Thighs’ is a vertiginous drive that meets a fiery end, Mr. Toad’s Wild Ride –style. Heck, on that note, album closer ‘Monster Capital’ could be a drive through hell. No vocals required, it’s all in the music.

Again, 18 years. Long ass wait but worth every second for III, a this mastodon wreaking havoc through the speakers.