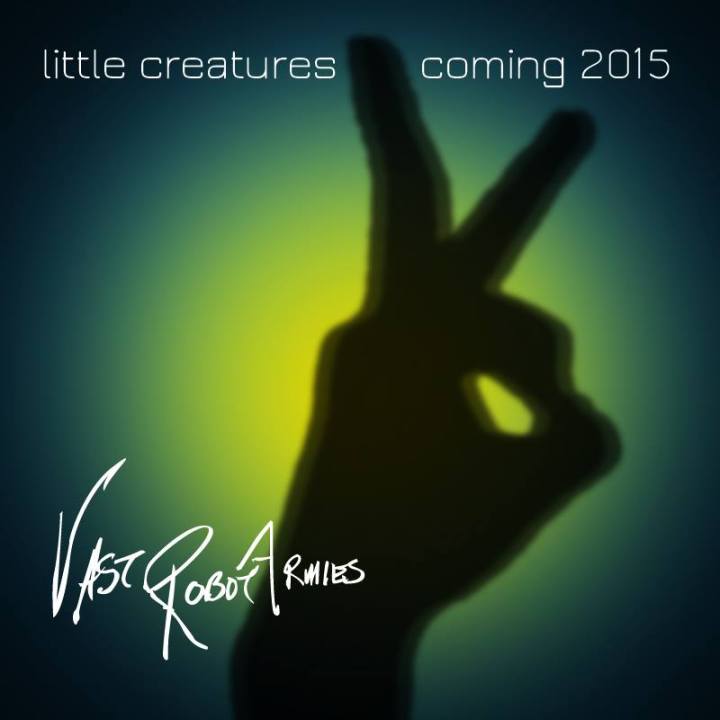 3 of my favorite days.

So here we were on Recording Day eve. I was up, showered, and re-packed by 8:15am. Today was the day. We were hopping into Joe’s car, buying Chris Metcalf a carton of Parliaments (cheaper in Missouri vs Illinois) and driving to Chicago. I was told the drive time was 8 to 9 hours. Even though I’m from Canada and I’ve done the drive twice about 9 years ago, I thought this seemed wrong. As it turns out, I was correct, there is a route we could have taken that was only 7 hours. But I figured John and Joe knew better than I did (they didn’t).

The plan was for Joe to get over to John’s house around 11:30-12 and hit the road, getting us to Chicago around 8pm. Drop our stuff off at the Air B&B and then stop by Electronical Studios and say “hey” to the gang (Allen, Eric and Chris) and see some of my Chicago friends in the band Sequoia who were in the studio right before us.

Well, none of that happened. John got up around 10 and puttered (started to piece together that in Vast Robot Armies John was going to be the “late” guy) around until 11:30. It turns out he was in rough shape and needed to get adjusted at his chiropractor before we left. Having spent the previous evening at a reflexology clinic, I did not have a leg to stand on to challenge this (*anyone else noticing the emerging pattern of band members and shitty backs?). So he set up an appointment to go to his chiropractor around 12:30. Meanwhile, Joe was packing guitars, pedals and clothes at his place. John, Lauren and I proceeded to go the local grocery store to grab some breakfast items and then make our way to the chiropractor’s. The chiropractor was late, so we waited on his property and proceeded to “Earth.” John explained to me that he had read about people that said standing barefoot on a large patch of grass for 15 minutes every day is supposed to “centre” you. I was out of coffee at this point and we were still waiting for the chiropractor. So I suggested we try it. I have to admit, it did charge me up somewhat. That said, it was a beautiful sunny day and the buzz of hitting the road and driving to Chicago was also amplifying my current mood. 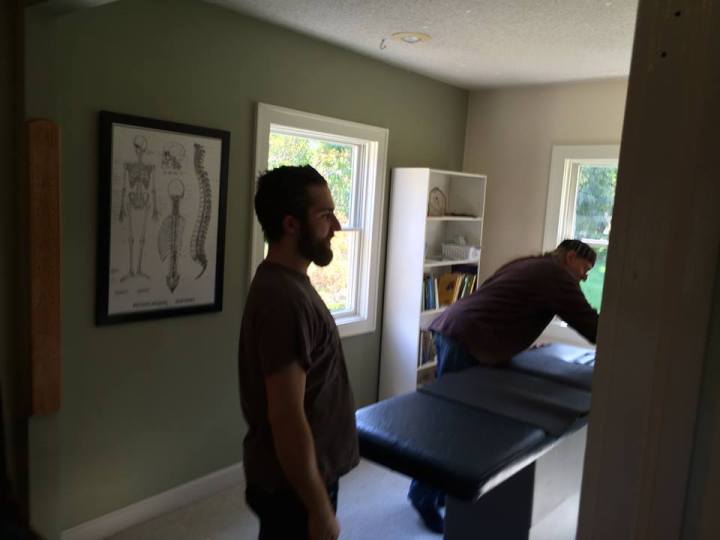 John’s chiropractor finally showed up. After this meeting, I felt like I have encountered the Alpha Hippie. I’m pretty sure he was the first. Peter Fonda has jack shit on this guy. We went into his house and I proceeded to watch John get hurled around a room. It seems to have its desired effect. We left to meet up with Joe at the Agee household. After some repacking of the car, we were finally on our way. It’s 1:30-2 pm.

The plan was to stop in St. Louis somewhere around 5pm for some lunch-dinner and then continue on to Chicago. We hit the road with KCMO in our rearview mirror. 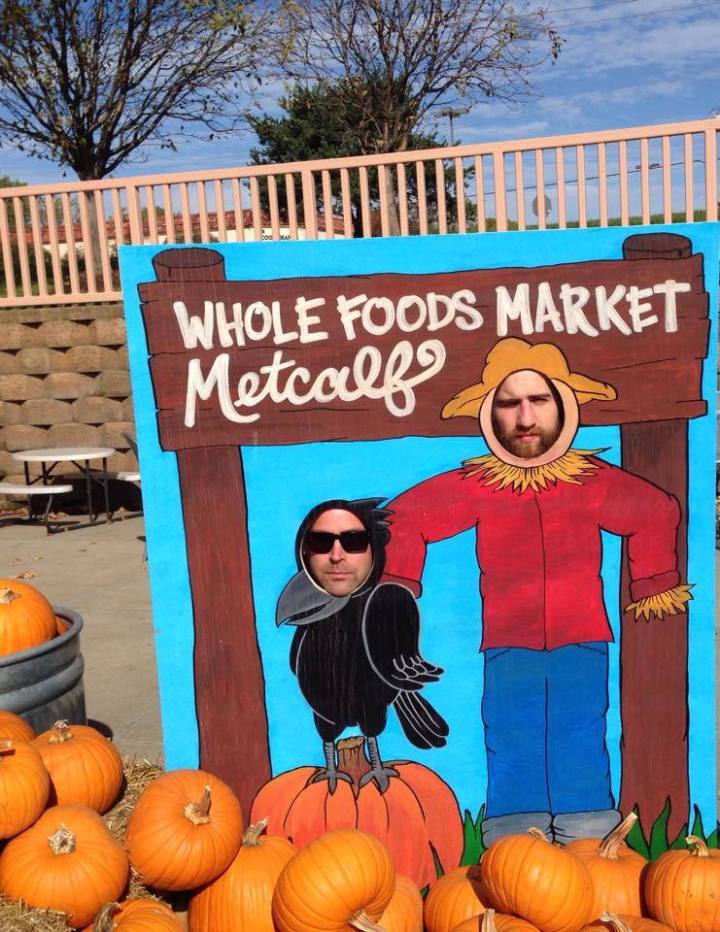 We arrived in St. Louis around 5:30. We decided to pull downtown and grab something to eat. After some discussion about our options, we landed at Pho Grand. It was nice to get out of the car and take in 37 mins. of St. Louis. 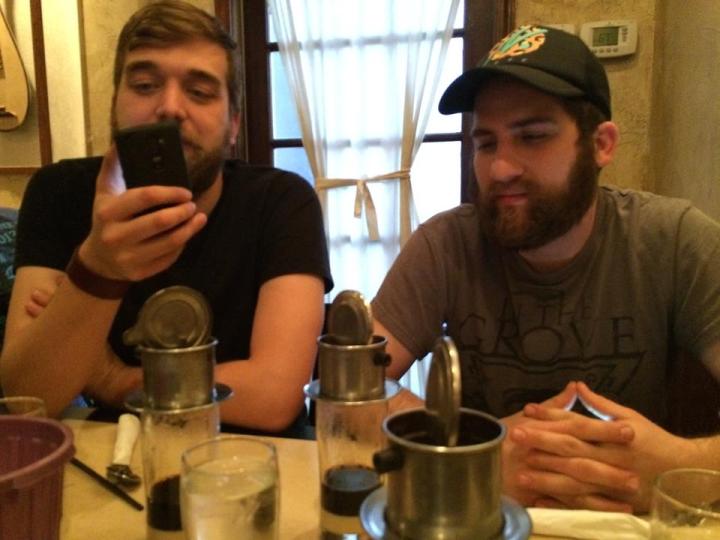 The Pho Grand rocks. Go there. Eat the things there.

Back on the road. This was the longest stretch. It got dark fast, and then we ran out of things to talk about. The car was got quiet for a solid 2 hour period. We stopped for gas and I switched to front seat duties. I scanned Joe’s GPS on his phone for any sort of noteworthy benchmark to call out.

Finally about 1 hour outside Chicago, I started just blurting out: “We should be seeing something, soon.” Any cluster of lights buoyed our spirits and attention. Then, finally …. city.

There is nothing like the euphoric wave that quietly rolls over all the people stuck in a car together once their destination become visible on the horizon. It’s so relieving. Everyone sits up straight, conversation blooms and energy levels throughout the car spike. We made our way through downtown Chicago towards the Logan square area.

We had gotten word Allen and Eric had left Electronical and we were to stop by their work (Longman & Eagle) for a drink and quick hangout. We decided to first stop by the Air B&B Joe and John had arranged for us to stay at for the duration of the trip, and drop off our gear and luggage.

The place Joe and John got was beyond amazing. A two bedroom, 12 foot ceiling, exposed brick and wood condo that, as it turns out, was a 15 minute walk from everything, including the studio. They did an amazing job landing that place. It made everything very easy and comfortable for the duration of our trip.

We were in and out of the door within 15 minutes, heading to Longman & Eagle. All of us had the needle buried in the red, and were soaring on a third wind. In Chicago (fuck ya.) Killer pad (Fuck Ya). Making a record (FUCK. YA). There was a driven confidence and enthusiasm that had begun to sweep over us. I had been noticing since I arrived in Kansas there was somewhat of an absence of that. Now, to be fair, I fully understand that I was a day ahead as I had experienced that rush days ahead of them, as I had left Toronto for Kansas. So I was already in Recording, Travelling Roadshow headspace. Now that we were Chicago, I could now see it on Joe’s and John’s faces. I predicted it would be gone by Friday. I was right. 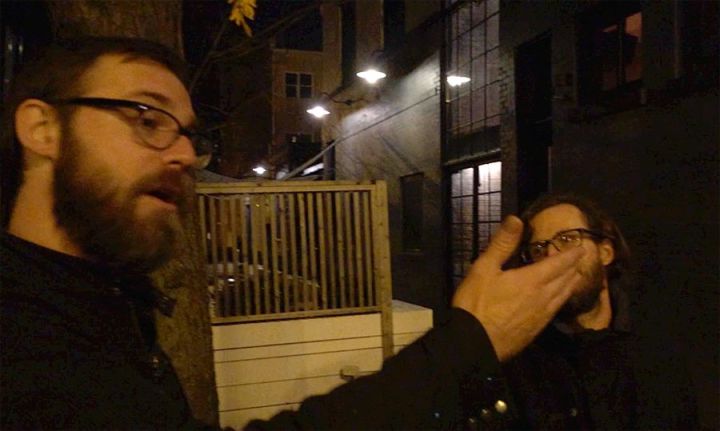 We arrived at Longman & Eagle. We opened the door and the first person we saw was Chris. It all became real at that moment. Handshakes and hellos ensued.

After a quick “How was the drive?”, Chris was quick to say that his name needed to be changed for the record credits, as he was the only member without a “J.” in his name. The suggestion “Jhrist” came up. (We’ll just have to see how that plays out.)

I looked to the bar and saw Eric, so I went over and jammed my face up in front of his with this stupid grin on as if to say “It’s on!” I then noticed Allen and walked over to him. After a quick “what the fuck’s up?”, he introduced me to his friend (Steve/Scott…think Steve) who also happened to be from Canada. It was an early (but reassuringly familiar) indoctrination into the “Canadian” jokes (“Do they have Pasta in Canada?”) that I was about to have heaped on. Steve/Scott and I played along. Apparently Steve/Scott plays in the Blueman group with Allen and is from the East Coast of Canada.

After a respectable 3 minutes of volleying that joke back and forth, we separated. It was time for more drinks and further unwinding. It took no time for all of us to decompress from the car trip and soon it was one wide-eyed-giant-stupid-grin exchange after another. At one point I went outside for a cigarette with Joe. I looked over at him and he was beaming. Wide-eyed and so happy. He just looked at me and said “Thank You. Thank you for this.”

It was a thoughtful thing to say (that’s Joe for you in a nutshell, he’s super thoughtful and highly analytical). I looked at him and asked “What? Thank you for what?” He just responded with “This, all this…” He just looked around and took in the neighbourhood.

I replied: “I didn’t do anything. Wait until day 6 and we are thoroughly sick of each other and studio fried. See if you still want to thank me then. ” He ignored me and smoked. 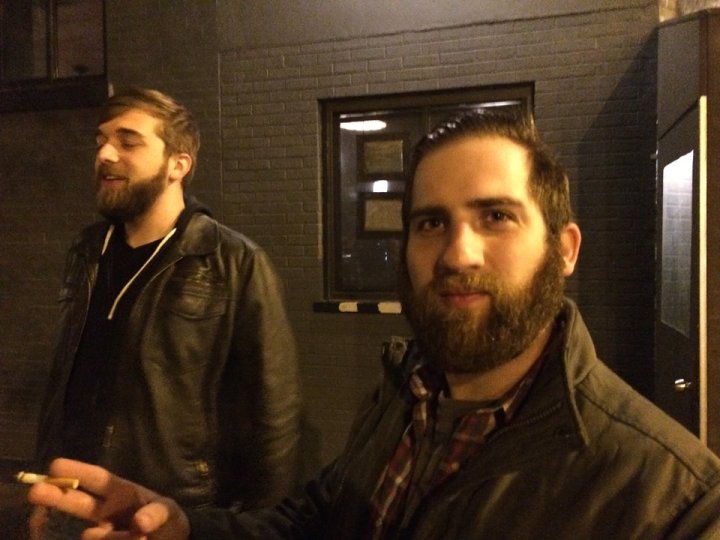 Allen took off, but Eric, Chris, Joe, John and I stayed until last call and hung out and drank. Outside of the closed bar, sufficiently buzzed and wired, we were about to go our separate ways. But then Eric suggested stopping by an afterhours bar down the street. I was the only one who was “ho humming” the idea. We went and consumed another couple of drinks together. Talks about the sessions that Allen and Eric had just completed with HIGHDIVER and Sequioa. Eric played my board ruffs of Sequioa’s session. These had me charged, as they sounded fantastic. Chris was super stoked to get in and do our one day of rehearsal together the next day.

After the long ride to get here, it was confirmed. This was a good day. We said our goodbyes and made plans to meet at the rehearsal space at noon the next day. We got back to the Condo and I immediately passed out.

On to, Day 4. The one and only rehearsal…