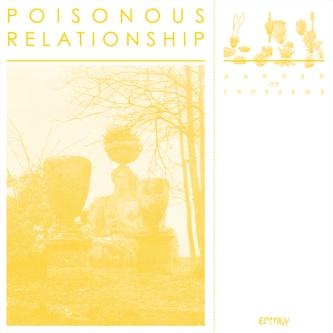 It’s a hot sultry night in New York City, 1975. I’m in the back of a cab heading down town. Crowds hustle on the street. The cab driver grunts unhappily as we stop at the red light. Someone winks at me from the crossing. I smile back from behind the shades. The cab radio splutters into life. I settle back into a blissful glitter-infused disco beat that oozes from the speaker, minimal and hypnotic. A Latin groove complete with a house mix and synths and vocals that reference Los Angeles and other places make this tune an earworm entitled ‘Men’s Feelings’.

Without noticing we have drifted into ‘Nobody‘, driven by tropical percussion and brass before ‘Nite Birds’ which has a harder and more sinister feel. The insistent snappy beat has my foot tapping. Next up, an infectious groove and some gorgeous jazzy chords. ‘Love Bug’ bubbles along effortlessly morphing into ‘Yellow Poppy’ the vocals muted and hushed almost sensuous.

The vibe remains the same: clipped beats, scratchy and edgy with a classic retro ‘disco’ feel as we slip effortlessly into ‘Endless Pleasure’, 12 minutes or so of atmospheric house that cruises along synths bubbling and vocals sliding in and out as the beat goes on.  “There you go, man”, the cab drivers voice breaks my reverie “Devonshire Green for ya”.

Damn I was hoping for the “Black Door” on 163rd St. and Freeman Avenue!

Welcome to the world of Poisonous Relationship, possibly the alter ego of Sheffield artist and producer Jamie Crewe. Yep, I said Sheffield but the feel of this album is New York Disco or maybe an L.A. pool party.

There is a Zen-like feel to the whole record. Tracks seamlessly glide into each other clever mixing enables the music to create a story of its own.
G’ is another shining example of Sheffield artists who create great music across all genres. Enjoy.