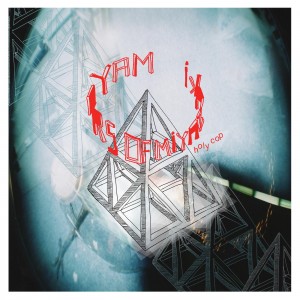 The first track of the album, ‘Souvenir’, starts with a build up of instruments to a sudden drop into the core melody of the track which for me, sets the album off on a high as the track allows me sink my teeth deep with it being a sneaky taster of the awesomeness left to come in Holy Cop. With both male and female vocals intertwining throughout, the contrasts keep the track lively which compliment the guitar tones and changing in time signatures.

As the album progresses, the energy is held throughout, the tracks are choppy but defined in their intention. It sounds as if different individual tracks have been combined with other tracks, which is cool, making the tracks more exciting to listen to as you’re transported into a world of distortion.

Something in which stands out for me from this album is the use of the spoken-word vocals, they work with the tapping and kinda give me the feeling of the band playing live in my ears, adding to the raw sounds of the album, something in which is aesthetically pleasing from this release. Plus, both vocalist have a cracking singing voice so when we’re lucky enough to hear it, it makes the hair on the back of my neck stand up on edge.

I also like the use of the different melodic guitar twinkles which are scattered throughout the tracks, especially in the 5th track ‘Part per million’, contrasting with the heavy guitar action, the track is filled with lots of different sounds which reveal the talent of the musicians in the band. I bet these guys would be ace to see live!

Overall, Holy Cop is pretty cool in it’s execution, the tracks are clean but also very raw, which really excite me as they’ve got balls! They’re definitely a band that kicks ass and isn’t afraid to go off on one, but saying that, they always seem to come back down to earth.  I’d highly advice you to give them a spin, or two or three.

One thought on “Mayors of Miyazaki – Holy Cop”