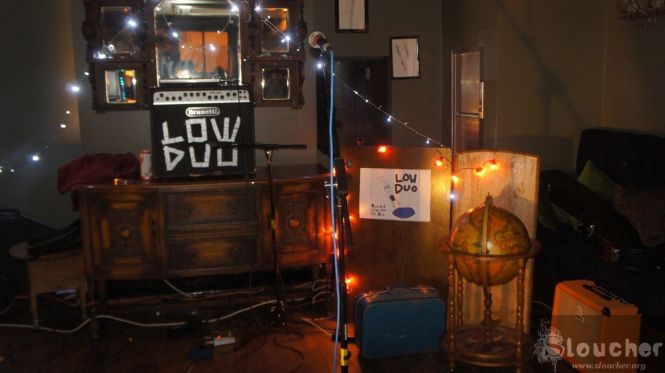 Funny thing, album launches. Especially when Low Duo is involved. Merely a month ago, I saw them open the night for Screaming Maldini‘s album launch (a rather loud and splenderous affair) and now it was their turn to offer us a regal spectacle in the only place in Sheffield that does a decent Reuben sandwich, The Great Gatsby.

Although the bands scrambled to decor the place (there were still people eating in the upstairs area), they managed to make it look comfy, with the always present piggy bank (I call him Chuletín) sitting on top of CDs layered inside a vintage suitcase. Think of it as a sort of honesty box, if you will.

Vintage suitcases, a half hidden dumbwaiter and fairy lights adorned the place too, giving it a slight jamboree feeling and considering how dapper Low Duo always dress, this is just right. 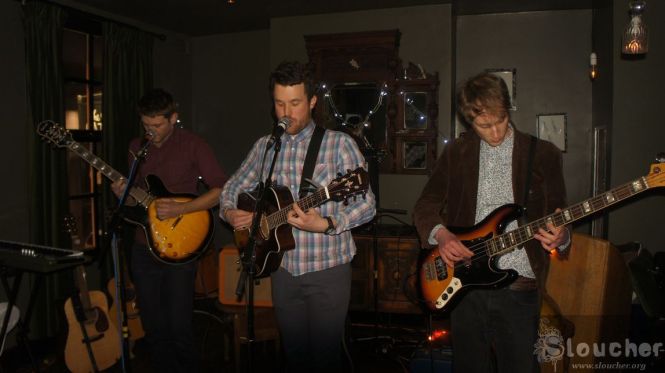 The Hudares, well, I’m not going to beat around the bush: I like them more as an acoustic band. I have no quarrel with their music as it is, but they benefit from the acoustic approach vastly; the songs get to shine a little brighter in the dark room. ‘Who knows?’ was the better tune and they roadtested a new track called ‘Of Sorts’ (I think – my notes are jumbled). It was an upbeat set, with a vivacious pace to the music never letting go. 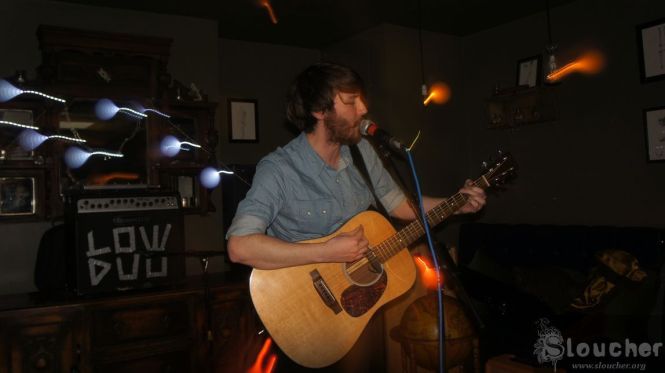 Now, in a place as dimly lit as the second floor of The Great Gatsby you either get happy go lucky romantic ditties or the melancholic tales of a down on his luck person. David J. Roch…man, I can’t really pin him in neither category, as he´s somewhere in between, veering from depressing, emotional shades to morbidly humorous moments. His first song is a cappella and it really means loads in these days when an audience actually shuts up and gets mesmerised by a performer. The rest of the set is wingmaned by his trusty guitar, but the initial enthrallment of his demolishing voice is enough to give him a blank cheque for the rest of the show. Not that he’d need it. Roch’s deconstruction and re-arrangement of ‘Amazing Grace’ is a marvelous treat.

Finally, it was the turn of Low Duo and while Adam, the guitarist, was tuning around with only the two photographers and the dumb waiter as witnesses (Chuletín was flirting with some punters). Then the perpetrator, Leigh, came in. The minimalist show given by brothers Adam and Leigh (aka Low Duo) is always an engaging affair. The adjective “minimalistic” will probably be the one most used for their stuff (well, besides depressing), but there’s something in the nihilistic approach to music the pair do. Sure, it’s not uplifting, but there is a heavy sense of gallows’ humour in every single song.

‘Ambulance’ always makes me think of Scorcese‘s Bringing out the dead (one of the best representations of guilt and loneliness in film) and ‘Born into a spider’ should make you think twice before reaching that shoe and sending your friendly, nasty-bug eating arachnid to the great cobweb in the sky. Old numbers were played to the members of the audience who have followed them since their beginnings, partly as a thank you and partly to quiet down their hecklings. One particular football fan was really asking to get defenestrated, but let’s not turn this review into another piece of evidence for my terminal misanthropy. 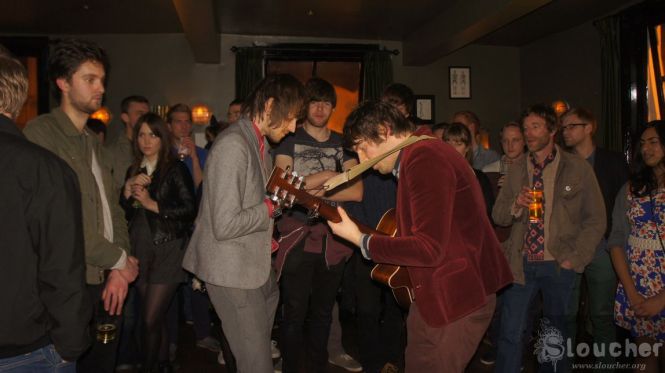 How minimal and quiet can a band like Low Duo go? Well, for one track they unplugged and walked into the crowd, showing that even when they are unplugged, their performances comes as powerful and as clear as it would’ve been heard through a nice valve amplifier. Theatrical? Maybe, but quite justified. Powerful? You betcha. Biblical? As much as that plate of lentils Essau forfeited his inheritance for. Google it.

Not a night to dance and groove to,but to get in touch with the grey brushstrokes of the emotional spectrum, with not a single moment to feel crestfallen. That, my friends, is the beauty of Low Duo: a happy depression.