Last Saturday was the Good Vibrations fundraiser for Macmillan and Myeloma UK, two good charities that might require your attention. It was an eventful evening.

“Who died and made you king quiff?” said my co-editor and friend for the evening, Orestes Xistos, after seeing my get up. I reconsidered and scrapped my Setzer-approved quiff for a more reasonable ponytail that could make me look like Banderas if I did exercise, but instead makes me look like a third rate Steven Seagal. That’s how it goes.

Roller derby. Now that’s a concept ripe for resurgence. With all the waves and waves of nostalgia and vintage love, how is this not making a big comeback I will never know. Mind you, it was my first Roller Derby, all previous experience was from :

b)      A misspent youth obsessing over Rollerball (James Caan is the bomb, yo)

c)       A pop video by Vampire Weekend or OK Go. One of them. What the frijoles do I know about music, anyways?

Curiosity piqued. My co-editor said he would be having a few drinks at Queens Social before the Derby, so I met the photographer, a fellow called Rich, by the entrance. Once in, a referee came by and courteously explained me the rules of Roller Derby, which is not as complicated as cricket and possibly less intricate than Whackbat. 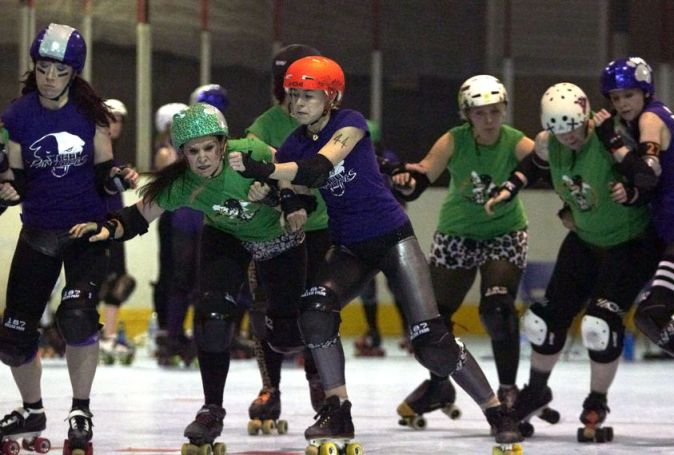 Two teams were competing that night. One was Death Leopards, the other Steel Panthers. One wore green (DL), the other wore purple (SP) and if this was happening in a comic book, one would be the superheroes and the others the supervillains. No, really, see how many supervillains use purple/mauve/burgundy. That colour’s got a bad rep.

Roller Derby is never as brutal as it could potentially be, even if some falls seemed quite hard. Mind you, bodychecking and crashes are a common occurrence and those did seem rough at times. A contact sport I could actually enjoy!

It was a close match. Death Leopards seemed to dominate for a good chunk of the first half, but they got overturned by Steel Panthers quite swiftly, ending the first half 69 to 61. The second half was a bit of a tug of war, with one team upping the other one every other round. Even if the rounds lasted 2 minutes, they felt longer and the penalty box was never empty on that second half.

I seldom write about sports because I find them absolutely boring. It’s also hard to write about sports without falling into clichés about how it’s all decided in the last play. In this case, it was decided in the last play, as the score was pretty close, so the last round was a bit of a hair raiser. Death Leopards ended up winning 109 to 101 (score unconfirmed – my notes were damaged).

The skating rink was opened around 9 pm for us mere mortals. The ring was lowly lit so someone with the agility of a drunk turtle (like me) should refrain from skating. Instead, I enjoyed the groovy tunes being played. A bit of rockabilly, a bit of soul, a bit of garage. All swinging and getting the stage ready for the first musical act of the night, Roaming Son. 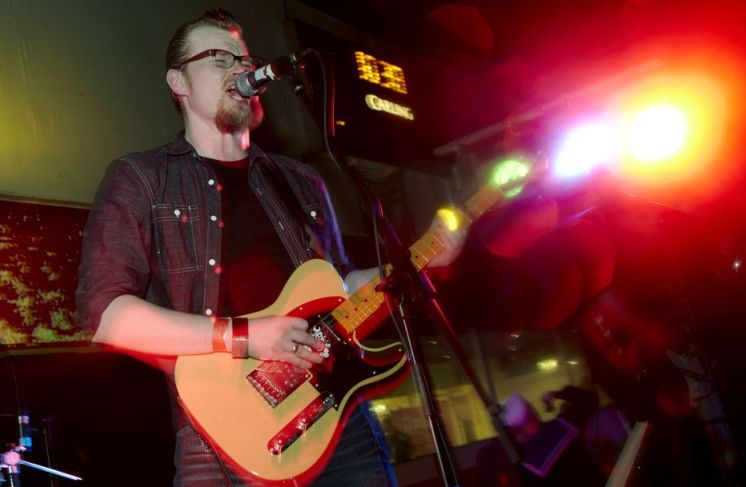 Roaming Son play fast Americana rock and when asked by my co-editor to define how they sound, I quipped: “Kowalski and his Challenger drove through the bulldozers and now are speeding home free to California.” Two tracks by the band are always a deal maker and they are ‘Devil’s Deal’ and ‘Belly of the beast’. The nifty guitar solos never fall into the virtuoso excesses, making it more of a slightly psychobilly band than a blues based rock band. If you dig solid old school rock (malt shops, muscle cars, drag races) this is a pretty good choice for your repertoire.

Carmen Ghia & The Hot Rods. The first time I saw them, I was in a swing dance Christmas Ball, all dressed up with pinstripe suit and fedora. Thankfully, those days are gone and the band still delivers a heckuva show. With the glittery lipsticked leading lady flexing her vocal muscles to the enjoyment of the fans, you could not pretend you didn’t want to dance to their swinging big band sound.

And boy did people danced. It’s always a welcome change from the “too cool for school” arm folding music fans you sometimes see at gigs, with that Deadite smirk. Women in vintage dresses and interesting hair styles, Dapper Dan combed guys with suits, a reviewer with two left feet and boots, heck, even a punk fella who seemed to be the spitting image of Johnny Rotten was busting some moves. Between harmonica solos and sax solos, the band kept up the tempo for a little over an hour, culminating with ‘Flying Saucer Baby’ and a new track. There was an encore and it was a cover of Arctic Monkeys’ ‘I bet you look good on the dancefloor.’ This is where I shoot my mouth and say I prefer this to the original. Selah.

It was a very good night and from what I’ve read on Facebook, the fundraising went quite well. I’m still a little confused as to why one of the rollerskaters had a tail, but some mysteries in life are better left unsolved.

You can get more info about Good Vibrations right here.