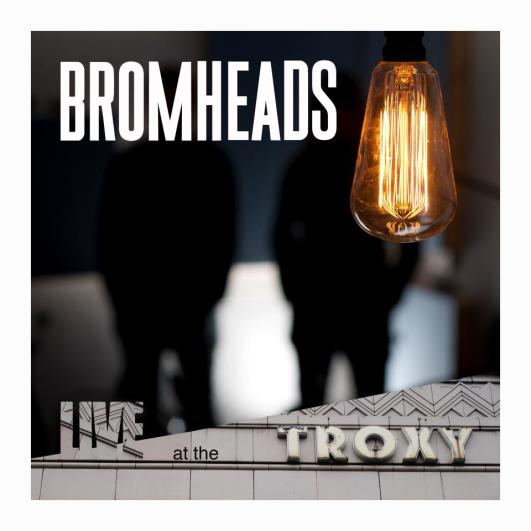 The wait is over…no, scratch that, it still on. Bromheads have been quiet for a while, plotting, planning and installing frickin’ lasers in their secret base in Planet Crystal Ship while preparing a new EP. As a “settle down, you needy fans”, a free live EP has been released, called Live at the Troxy.

Interesting choice of tracks. Once they dropped the “Jackets” bit from their older sound self, they released a cover (‘Boots’) and then continued to release free tracks for a year. The first two original ones were ‘Edey’ and ‘Hole in the head’ and, as expected, these two songs are the ones that changed the most in those 18 months that Bromheads played constantly in Sheffield.

Obviously, the beauty of this EP is having these two songs in their newer shape. ‘Edey’ still is a catchy tune, with a punchier fuzzy tone than I remembered (POG, maybe?). ‘Hole in the head’ is also catchy but feels rockier now, I might even venture to say that is better than the original (which still is a good track).

The real treat in this EP is Bromheads‘ cover of The Sonics‘ ‘The witch’. A live fave, this is a great rendition and always a sure fire way to get the heads bobbin’ in the audience.

So, yeah, three live tracks, all good. What’s next for the band? Rumours, mysterious clues on Facebook about a USB somewhere in Sheffield, containing cryptic clues (and tracks), haircuts, an ongoing battle with a famous band from Chicago. Who knows? What’s real is that you can get this EP for free and it rocks.