Wagonwheel have been putting nights on in Sheffield for years now, and the Wagonwheel name is synonymous with Sheffield‘s fledgling alt-country scene. But Wagonmaster Craig brings acts in from all over the country (and occasionally beyond these shores) to support or headline alongside the South Yorkshire bands. Recently they’ve brought some amazing bands to The Greystones – The Deadly Gentlemen and Amanda Shires to name but a couple.

For the first of Wagonwheel‘s new monthly shows at The Shakespeare, Wagonmaster Craig shipped in a trio from Leicester who dub themselves The Kirkland Turn. For a special treat, I’ve handed review duties for the first band to John Le Baptiste of the outdoors-averse film blog, The Agoraphobic Reviewer. Knowing he’d refuse to actually turn up to the show, I described the band’s set to John over the phone and he submitted his subsequent review in cartoon form, which I probably should have destroyed on receipt.

As you can see, he’s been somewhat dismissive of what he calls their ‘milky mood’, but I quite enjoyed their upbeat tunes and energy. Their drummer is a multi-instrumentalist, switching from trumpet to glockenspiel on a sixpence. And they did a version of ‘Feed the Birds’, which was lovely.

Next on were Killing Fields of Ontario, who’ve made something of a name for themselves on the support scene around the country. They brought quite a few people in too, although most of their supporters left straight after their set, which was a shame. 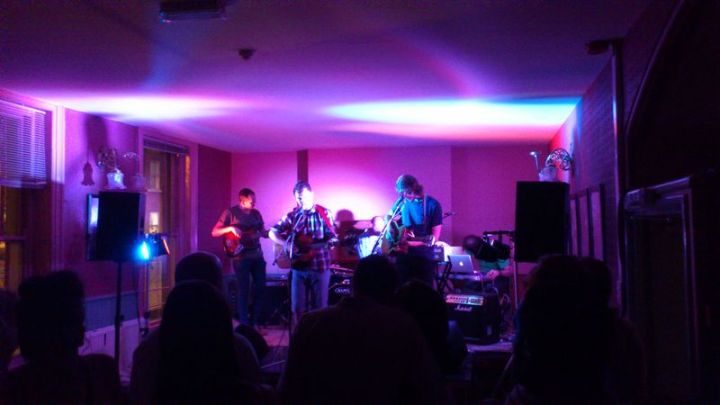 KFO have a gentle approach here and there, and the singer has a wistful lilt, conjuring up the high intonation of the Mumfords. They also get their electrics cranked up for a few numbers, which are the more enjoyable moments of their set. They have the indie approach to Americana, like those Mumfords again… or Arcade Fire.

There’s some banjo picking too, of sorts, but the sound doesn’t quite carry it through The Shakespeare‘s PA. Amplifying the banjo is never a straightforward affair, and competing with an assortment of electric instruments only complicates matters. But it was nice to see a five-string.

They have a big sound, some very polished songs and they’re very tight. If I damn them with faint praise, it’s just misplaced envy. They’re young, good-looking, have nice haircuts and look like they probably buy their checked shirts at a popular high street shop. And good luck to them.

Big Convoy take to the stage in a half-vacated room, but those who chose to stay are there to listen. And, in return, Big Convoy do a great job. They play with guts and honesty – there’s no posturing or mugging at the crowd. For singers Mat Wale and John Bachelor, it’s just about the songs – songs each of them has been playing separately for a few years, in some cases. The Big Convoy ‘project’ is their way of reinvigorating and reinventing those songs.

Big Convoy‘s sound is big – heavy on Bachelor‘s melodic, overdriven guitar solos, and paced with the rhythm section from Wale‘s former outfit, The Rackets. They idolise Dinosaur Jr, and it shows, although they sound more akin to The V-Roys to me – they have that smoky bar-room band feel.

If Bachelor is Big Convoy‘s work-horse, feeding the songs their energy with chunky riffs and firecracker fretwork, Wale is the band’s show-pony – solidly punching out the rhythm on his acoustic six-string, and punctuating verses with the blues harp. He’s got a damn fine voice, pens a great song, and is one of the region’s under-sold stars.

Again, the venue’s PA wasn’t quite on the money. I could have handled more volume from the electric guitar – but it’s a minor quibble. Three bands for four quid, in a pub that’s part of the city’s musical heritage. You really can’t grumble. And it’s good to see Wagonwheel have a foothold in the city centre again.