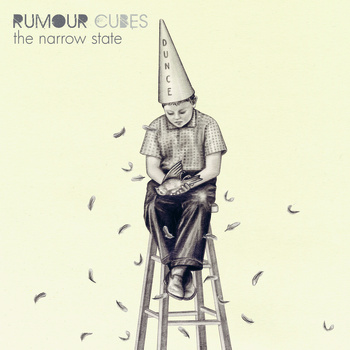 Equally, sometimes it feels like you don’t really need vocals for a musical piece. Call it post rock, neo classical or cinnamon sticks with hibiscus, there are sometimes music that doesn’t need vocals.

No idea of what genre to apply here, but the latest album by Rumour Cubes, The Narrow State, has one of the loudest non-existent voices that I’ve heard, mainly in the form of a violin. This does not entail that the violin supersedes the importance of all the other instruments nor should it imply that the mix is not balanced enough. It’s just that from all the notes and textures, it’s Ol’ Stringy Face (TM) the one that rises and soars.

Okay, there might be some competition during the very slow burn, tension building first half of ‘The University is a Factory’, where both violin and ebow compete for your attention (and senses), the way Daffy Duck and Donald Duck fight in Who Framed Roger Rabbit?

Eh, let’s move on. Songs and moods are reflective, slowly building, sometimes just creating a very magical atmosphere for those moments when you do a self-assessment (and pray to come out in the black and not in the red), let’s call those reflective moments ‘Tempus Fugit’, because that’s the name of the very laid back album closer.

There’s two bookends so far, two very different faces to a book. What are the chapters between this journey? ‘The Gove Curve’ (which we have reviewed before) is a fantastic track. Again, kudos to the violin, which out-distorts the very cool, fuzzy guitar in the back. It’s a great track, tying the worlds of post-rock and prog like a boondoggle. The vocal sample is a little unnerving, makes it more apocalyptical than it already is.

Is there salvation after an ending? Can we find redemption after falling from great heights? The slow, almost reassuring moments introducing us to ‘At sea’ lead us to believe that yes, hallelujah and all that, we are saved. But the dissonance and the slow increase in tempo take away that veil. It explodes, in a treacherous way that only the sea could be like. Even if you manage to survive that heartless sea, the thundering storm (in the form of ‘Rain on Titan’) awaits.

So far, from the beginning of the album to this point (track #5), the intensity is increasing. It shows finally in ‘Triptych’, where there’s a mutiny. The rest of the instruments decide to go for a coup-d’etat and go all metal on us. Great for headbanging and trippin’ out. But this is a turtle and the hare situation and once the impetus of youth wanes, it’s time to follow Ol’ Stringy (the band’s gonna kill me for that, right?) into an explosive ending.

Which yields ‘Tempus Fugit’, which we already have established is quite good. So, somebody give something nice to Hannah Morgan (who deftly creates atmospheres and layers on violin) and somebody tell Rumour Cubes made a fantastic album (début, nonetheless!) in The Narrow State. Nifty physical product too!