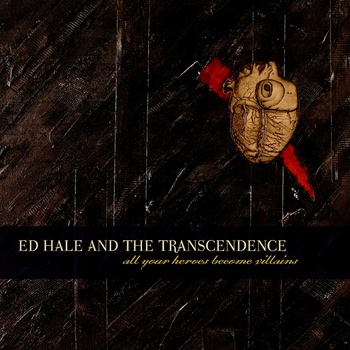 A concept album of sorts, Ed Hale and the Transcendence‘s All your heroes become villains is a collection of songs tackling different genres. Not too diverse to be disparate but still different enough to be dissimilar, it harks to some brit pop, some prog rock and, of course, some blues based rock.

After a strange, chaotic and almost cacophony-laden intro (‘All your heroes become villains – Main Theme’), the band goes for a more straight up approach. ‘Blind eye’ has a foot clearly planted in 70s arena rock with some good ol’ riffing (rocking moments there). It’s a wild song and it’s a safehaven after the more experimental nature of the opening track.

The rock and roll font is abandoned, though, as the name of the game is “genre hopping”. Deftly changing from poppier sounds (‘Solaris’, ‘Here it comes’) into jam, rock ditties (‘We are Columbine (The Unforgiven)’, ‘Waiting for Godot’) is what Ed Hale and the Transcendence excel at. Let’s say: the brush will be the same, the colour will vary.

A couple of standout tracks from this album. ‘Indian princess’ is a sweet tune. Again, there’s some Brit pop ideas here, but it’s more of a rockier shade of Chamber pop, with a sitar giving some extra flair to the track.  ‘Waiting for Godot’ is beautiful. It starts thoughtful, even a little remorseful (like those moments of self-doubt that plague you at night) but then emotions (possibly pent-up anger) build up to an explosion. Of all the songs of the album, this is the one that is richer in ideas (with some tough competition) and it’s easily the most enjoyable of the lot. From a sad start to a big, AOR sound, the song evolves. Has a hero become a villain? Has a friend left you out to dry? Has the significant other gone to pastures greener? We don’t know. We don’t care. There’s a fucking cool guitar solo and that’s the only thing I’m thinking about by the end. Classy piano ending.

It’s not an easy album to get into. You will need patience with it. But it is rewarding and it might be aimed to people in a certain mindset where emotions and thoughts clash. ‘After tomorrow’ (the penultimate track) certain feels like the end of something and if you feel like you are in one of those crossroads in life, this might be a good soundtrack.