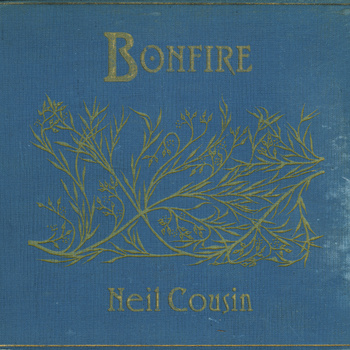 The folk genre has been getting a bit of a resurgence as of late. Just ask Fleet Foxes. It might have something to do with the usual cycle of genres fading and coming back, but it’s always nice to have some variety and The 20__ Return Tour of Folk Bands is quite welcomed.

With that spiteful rant out of the way, let’s take a peek at Neil Cousin‘s Bonfire. Without any form of pretence and with little studio meddling, you get 12 ditties (hey, like the Apostles!) of acoustic loveliness, filled with longing, romance and some panpipes, because, hey, they are a nice dreamy instrument.

‘Semaphore Haiku’, straight out of the bat, is very pretty and pleasing, sort of like finding an old love letter you never sent to your junior high school crush. She probably married someone better than you, so you get to keep your very nicely written words. Cruel but you know it. ‘And if’ might be the one influencing this cynicism, but, hey, folk has always been a brutal, straight talkin’ genre.

‘And if’ is pretty guttural. The string section adds a whole other layer that elevates it from being “a man with guitar” into “a man with guitar, friends and a story to tell”. It’s an Autumnal lamentation and there’s this feeling that it’s a dialogue with some weight to it. Maybe to the aforementioned high school crush?

Don’t read too much into that. The string section comes back later in the game with ‘Oh for the spring’, making it a very solemn one. ‘Dead Chris’ includes some heavy vocal shenanigans, another staple of the genre and possibly why it’s an enjoyable genre: first, it separates clearly the people who can pull it without studio wizardry and secondly, it gives people the chance to take a little gimmick and make it a memorable hook to their track. Neil Cousin‘s voice sounds a little driven by alcohol and memories. Let’s hope it’s the good type.

There are rockier numbers, of course! ‘Pub singer’ is little singalong, ‘You’ is the catchy folk rock one and ‘Said so/Head goes’ is the clap-along one. Love the percussion in it too.

Now, there’s a couple of tracks that are the selling point of Bonfire and they are conviniently waiting for ya in the midst of the album (kinda like a Folk Little Chef). ‘Carpathian Mountain March’ is a little ode to nature and it’s the combination of so many acoustic elements that make it a rich, heavily textured song. Sure, Neil Cousin‘s gravelly voice is floating along with the snow, but the sum of instruments make one snowflake into a flurry. ‘Eldest little sister’ is a very sweet track, featuring a duo with a female vocalist. It’s interesting to have an angelic voice going with Cousin‘s Long Island Ice tea-ed voice and the glockenspiel is just an extra layer of sweetness.

There’s more female vocals in Bonfire‘s closer, ‘The Headless Hawk’. The song is very gloomy, a stark final act to an album that delivers a wonderful type of folk that never goes twee and rather goes for a story to tell. Let’s hope the ending of this story is not as dark as the music suggests, but if you went into your attic to look at old loveletters, then maybe you’re not in the happiest of moods. Don’t worry, Neil Cousin and his folk are here to guide you through the sombreness.

One thought on “Neil Cousin – Bonfire”