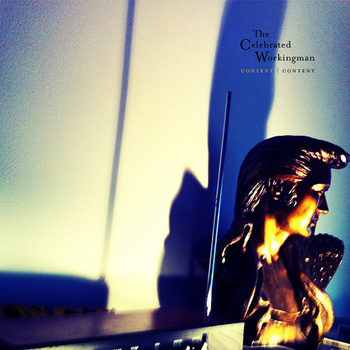 A powerful voice that fills your room and your ear channels, a rough yet extremely melodic voice with a chiaroscuro in his tone that slowly (but surely) takes over all of your senses like tentacles stretching to your chest and mind, then you remind yourself that your mp3 player reads “now playing The Celebrated Workingman”.

In September 2011, an album was released under the name of Content Content including 11 tracks, and every single one has its very own universe as it can take you from comfort to the very edge of irregular structures, sound and textures of every instrument.

Instead of images depicted and described through music compositions, I find emotions and feelings, being vocals the ultimate vessel that delivers the color of the emotion. Each instrument is incredibly endowed with a heart, and shows it off while it plays with irregular sounds that go from quiet to loud, from total silence to sharp effects.

Even when this band is catalogued as indie pop, there are several surprise factors that would enrich the soundtrack of these adventures as it suddenly deviates sounds from one channel to another, or just by mixing sampling when less expected as in ‘Hung to Dry’ (track 5), which is a mainly acoustic song in which Mark Waldoch wraps the music notes by the acoustic guitar with his very own voice to then give room to a sampled woman’s voice, causing this strange feeling on the back of your neck that something is not right. This description is also fulfilled by ‘Clemency’ (track 6), having a standard structure and pounding bass lines to then become a swirl by slowly increasing its time signature and then return to calm, becoming a structure that is nothing but unpredictable.

One of the main features of this band is the freedom perceived from every band member; there are standard riffs, but they are embellished through various figures, almost like ‘”juggling” (never pretentious, though), getting the utmost of their music instruments of choice. For more examples on this description, please refer to ‘Impossible Interiors’ (track 2).

Another major feature of this album is the well organized multi-layered sound, the texture given to each sound. The bass guitar texture deserves a special mention: just exquisite, rough, vibrant, clean, fulfilling successfully and beautifully its duties as the pounding and major heart of the band).

The multi-layered sound is the real explanation of the surprise factor surrounding the style of this band, as it interrupts the somewhat common transit of the song, empowering lyrics and specific sounds, or just getting out of context the general feeling/idea of the song, as ‘A Lover’s Waltz’ (song no. 8), a piano based song being the owner of a nice and flowing scenario, which is suddenly diverted from its course by almost invisible sounds not related at all with the style of the track.

As a proof of the eclectic style of this band, we proceed with ‘Some Mistakes Are Worth Repeating’ (track 9), a pop song tangled in magic and vocal juggling, all accompanied by music notes delivering optimism and light to that exact moment you listen to them.

There are as many styles in this band as fish in the sea, so it may be a little bit unfair to call them ‘indie pop’. There’s this always this habit to name everything we perceive, but sometimes words are not enough to describe what has caught our attention. In the exact moment where words lose sense and are insufficient, that’s when music or arts in general come forth as an attempt to create other languages, and The Celebrated Workingman has successfully created one that demands nothing but your time and ears, then let the music talk.