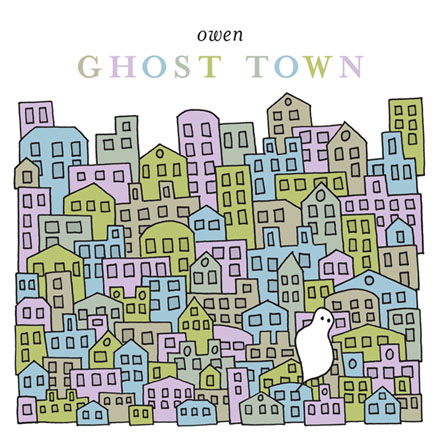 You know the drift: the key of the song changes, all lights go wild, the ensemble plays Greek chorus and the song and dance routine makes the audience applaud and roar. That’s the way your emotions will jump and weave and cheer with this album.

Specially when Owen drops the f-bomb. Not too many times to guarantee an R-rating, but just a PG-13 (i.e. bragging rights on the playground).

‘Too many moons’ is heavy on the fingerpicking approach, but an orchestral arrangements pops its head a few times, like a playful tabby cat wondering why are you watching 22 rich dudes kicking a ball (and cheering for it).

‘No place like home’, ah, well, keeping with the cat analogy, yes, the cat has approached, it has purred a lot, fooling you into a sense of peacefulness and then it stole your chicken wings, your beers and changed the channel to a 24-hour marathon of Garfield. The song is playful but there is a subtle aggressiveness. You won’t feel it, though, the music is so pretty and nice you’ll ignore the pain.

And it’s pain what seems to fuel a lot of these songs. Some are very mournful (‘O, Evelyn’), some are full of longing (‘An animal’ – beautiful cello) and some are a combination of folk and the more colourful, rocking aspects of slocore (‘Mother’s milk breath’ – another moment that’s pure Ambrosia).

There are two songs that will get your attention. ‘I believe’ sounds like the conflict of the modern religious person: you want to believe, but there’s so many things preventing you from giving in entirely; the painting is shades of grey, not black and white. The fade in is grand and the 6 minute running time flies by. The solo is perfect and made me think (but not compare) of Red House Painters.

Although not a cornucopia of sweet sounds, ‘No language’ is perfect on its lyrical sensibilities. It’s very, very bitter but also funny. It’s that sort of gallows humour you get when presented with a terrible situation. A break up, a fight, the end of an era, you name it, this song feels like that bit when you are no longer angry/upset and are smiling a little bit about the whole ordeal. “I’m still punching walls that look like you / I drop kicked an old lady / she didn’t do anything” sums it perfectly. Solo is fucking brilliant too.

‘Everyone’s asleep in the house but me’ closes Ghost Town with a warm, fuzzy hug. It’s dreamy, sad and the double vocals make it even more of a gem. The quiet moments give it a lot of variety (especially when they lead to a rocking solo with a very saturated guitar).

Owen‘s Ghost Town is one of those albums you want to devote your whole attention to. If you put your mind to other stuff and leave it as background music, it will sound very nice and soothing, but if you give it your time, it will be very rewarding and you will find many a hidden nugget of emotions waiting for you with open arms.