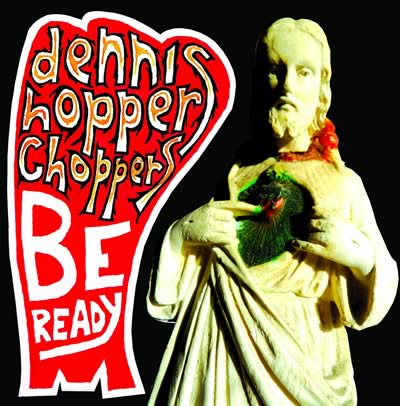 Stream – ‘All that I once thought’

However, it has something so modern and new that can also be considered to be  vanguard. The rhythm in each song is very different but keeping a vintage or retro style that might be classified within Rockabilly, Folk and Punk.

I thought it was a band but going further and researching, I realized Dennis Hopper Choppers was a one-man-band: Benjamin Nicholls. Of course he is sometimes assisted by other musicians (drums, viola, saxophone) but he normally plays all the instruments, and sings, all at the same time! This is something that must be declared awesome and Benjamin Nicholls must be treated as a great musician.

As I mentioned before, all the songs are exactly distinctive and this is giving the listeners a very heterogeneous album: Be Ready. I can imagine the ability of playing various instruments, singing and giving a meaning to the music; what my mind can’t take for granted is the huge creativity that one should have in order to compose and play different patterns and riffs, different melodies and rhythms in all the 12 songs recorded for this Be Ready album.

One of the most noteworthy element is the vocals. Let’s say Benjamin’s deep voice, being a baritone, brought Elvis’ voice to my memory but I’m not comparing them, it’s just that I find something a bit similar.

In the end, the greatest part of the deep voice is not the similarity to Elvis’ but the personal feeling; I mean, you can really feel what song is about because Benjamin Nicholls projects true feelings while singing. There is something in his voice that keeps you wanting more so you just can’t help but listening to the complete song until the end, and then listen to another, and then another, and so on. In a way, listeners could describe if the song is depressive, aggressive, maybe romantic, etc. only by let it flow because of the great voice of Nicholls.

In my opinion, it’s admirable indeed the way Dennis Hopper Choppers makes and performs his music. Besides the way Benjamin Nicholls is able to express how he is feeling by singing. With this kind of musician and this kind of creativity, capability and music loving style, I merely say Dennis Hopper Choppers, a one-man-band, is something to have in “one’s music collection”.

Even if at the starting point I noted this kind of music reminded me of my childhood and my parents preferred music, I’m saying now that Dennis Hopper Choppers is much more than memories, much more than influences and a lot of creativity and music love.