Kings of the heap in Stag Works. That’s the first thought it crossed my mind when Thomas and Nick welcome us into their rehearsal space. They share their room with another band (whose name we forgot). Piles of old books, cassette tapes, oil paintings and DVDs are everywhere. There’s also soldering irons, trimpots and bits and bobs of wire. Some guitars are in different stages of of repair (or disarray) and the sound of a band playing some heavy metal downstairs lingers in the air.

Still, the place is cozy. Thomas offers some instant coffee while Nick sits behind the drumkit and does some drumming to keep warm.

They are Death Rays of Ardilla, and Thomas and Nick are brothers, well armed with guitars, pedals, valve amplifiers and a drumkit. While the kettle is working, Thomas shows us one of his guitars. It’s a little knackered and he regrets the neck bit being curved up now. 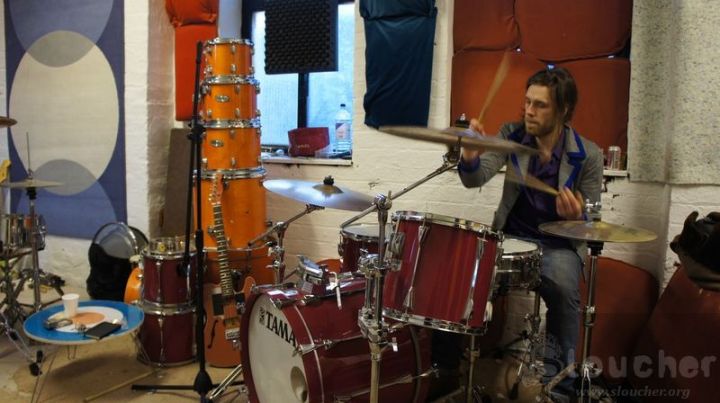 Some of their other equipment (amps, cymbals) seems to be falling apart too. Not that it matters, as they push all of their equipment to the limit and enjoy doing it.  It doesn’t hinder that much their performance either. We get treated to a couple of songs and then we sit down to talk. We go for the first, obvious question.

“So, probably everyone has asked you this, but, why the name Death Rays of Ardilla?”

“It’s from a book by the guy who wrote Biggles (W.E. Johns). I just thought it was a good band name!” says Thomas. We inquire if it’s that Biggles and he nods. “Yeah, the pilot. I’ve never read the book., but it’s got a good cover. It has a big science fiction death ray kinda thing”.

When we ask if it would be better only as Death Rays, Nick chimes in, saying that they thought about it and even their Facebook fan page is only Death Rays, but people seem to like. I do express my liking of the whole name, but then again, Thomas points out I am biased for squirrels. 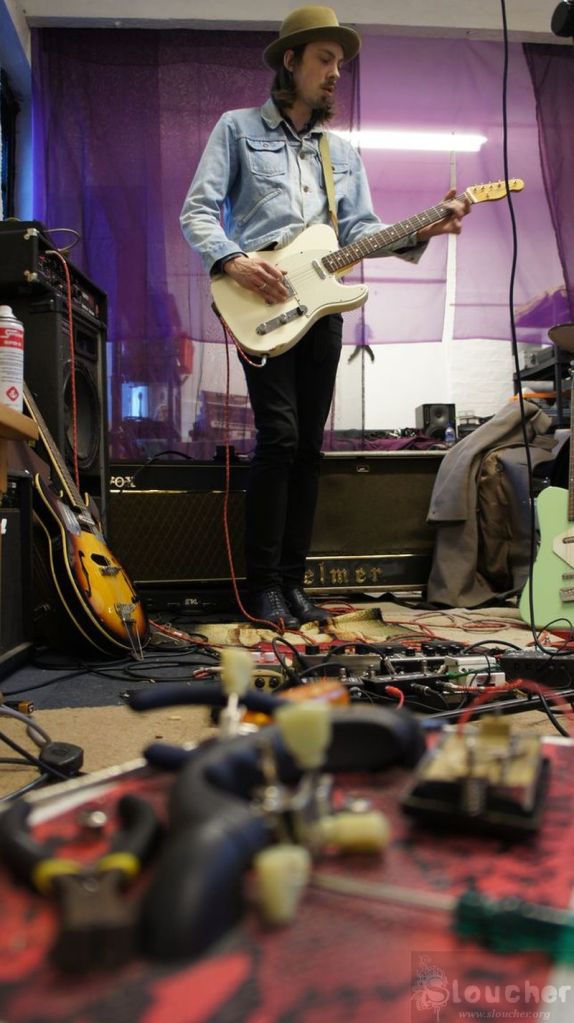 PM asks them about how their working relationship is as a band, since they are related.

“It’s easier to play” says Nick. “We sort of know where the other one is coming from”.

Thomas adds “the fact is, being able to communicate quite easily without having to explain yourself, makes it easier”. He then delves further “There isn’t any band politics whatsoever. I went to the pub with my mates the other day and there was this band, sitting down in the table, sort of just having a ‘band politics’ sort of meeting and it was bloody horrible”. He lets out a hearty laugh and continues. “It made me think of the days when I was in a massive band: have meetings in the pub where everyone just says and complicates it. It’s fucking horrible”.

We drink our coffees and after a few photographs with some rather dashing hats (some bought from a jumble sale a few weeks earlier), we ask Thomas and Nick about the possibility of a physical release.

“It should be out soon, I hope. Ten inch vinyl!” says Thomas, quite enthusiastic about it.

After we ask if it’s going to be vinyl and download combination, Nick says that it’ll only be vinyl, with a possibility of cd further down the line.

Thomas adds “I like vinyl, you get the large piece of art, something that is missing now”. Then Nick finally says “It also makes you take your time with it too”.

They both agree when we suggest if it makes music less disposable. We do continue talking and our conversation is veered towards albums.

“I love people saying that they are dead, but I’m not sure. If there’s a band that I like, I’ll listen to that album. Liars last album? I thought it was pretty good. I’ll listen to the whole thing. I’ll never listen to only one song” says Thomas. Nick adds “It is a cohesive album” with Thomas finally commenting “It’s building towards something”.

Can’t argue with that logic. We do spend the next ten minutes or so looking around at a bunch of tapes and DVDs in boxes and then we remember that Death Rays was one of the bands invited by S1 Artspace to do a live musicalisation to the film Carrie.

Thomas tells us the story behind “We were asked by S1 to play. They were interested on us collaborating with another band, see what came out of it and it was good. It had to be something to do with visuals as well. It wasn’t as rehearsed as anyone wanted and there was some alcohol involved, but we enjoyed it. It could be expanded and done again.”

Nick enjoyed playing this experiment. “It worked well. Doing a live soundtrack to Carrie. Interesting to play around with another band. Their sound and our sound got together well.”

Thomas admits it was them who chose Carrie and when we ask if there would be another film they’d like to make a live soundtrack to, he explains his argument for choosing Brian DePalma‘s film. “The thing about Carrie is that the it doesn’t have an iconic soundtrack. The choices that come up to mind do have one, like Paris, Texas or something like that. We need to choose something that is simple but visually impressive, so we would have to work on it. I thought your idea of THX 1138 was good”.

“I’ve seen bits of it, but not all” admits Nick. Thomas mentions more about George Lucas’ film, with holograms, Robert Duvall’s tour-de-force performance and the retrofuturistic setting. “Sounds good” says Nick with a broad smile.

We talk about several things, dawdling idly from time to time to look at the stuff around. The strange oil paintings in the back, an Elvis figure (with pelvis swinging action too) hanging from the wall, a table with a Mod circle painted in it, Thomas’ amp (a beautiful Selmer) and we decide to finish the interview with a little video. Excuse the sound quality (and camera work), we are still figuring out how the darn thing works.

We’d like to thank Thomas and Nick for chatting with us! 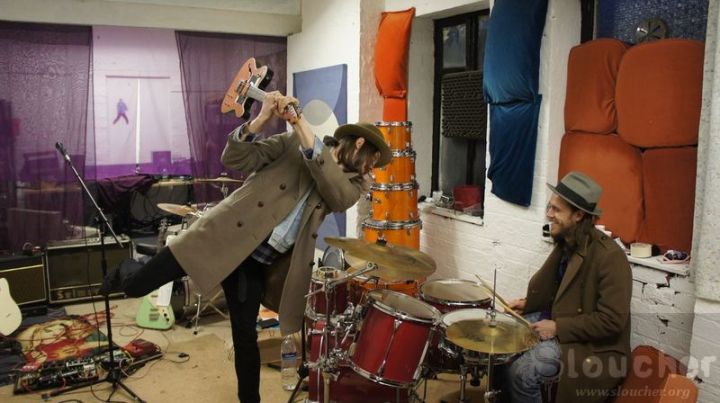 One thought on “Interview – Death Rays (of Ardilla)”