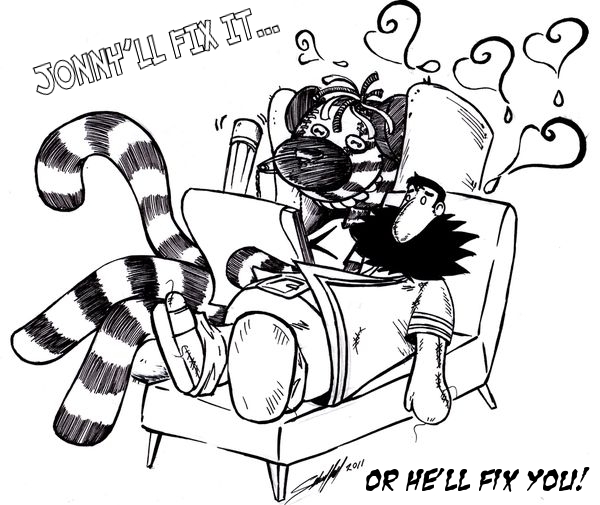 Jonny’ll fix it … or he’ll fix you is Sloucher’s own “Agony Aunt” section. These are true cases, but the identities of those involved were changed to protect them. Feel free to send your troubles our way.

This week, we talk about some rather lascivious problems…

There’s this girl in my IT department that really grinds my monkey gear (I’m a cymbal clashing type of monkey).

She sometimes is a very, very nice person, sometimes she swings around on her chair while we talk, all flirtatious and stuff. Sometimes she’s as frozen as a Wall’s popsicle. I recently managed to go out with her to this upscale ethnic restaurant near the roundabout where the tram goes to Banana Hill.

We talked for hours and hours, and as the chat progressed, she extracted some, hmm, compromising information about my love life, or, lack of. I also noted that she isn’t as nesh as I thought, but instead she is a salacious, lascivious malemonkeyeater that won’t stop at anything for the need to breed (without any chimpies being produced, she is careful).

She said some subtle stuff when we finished the chat, but as I’m not a matingly active monkey (i.e. i’m a no shagging monkey), I might have misinterpreted the words and we just talked some more and I left her at her tree and then I walked to mine. I realised when I arrived to my nice Oak that she was suggesting summink, so I now wonder if I missed a train...

So here are my questions, dear Jonny Sock.

-Should I go out with her again?

-When is it a good age to pop my monkey cherry?

-If I go out with said shaggingfriendly monkey, will she leave me for another monkey that is more alpha than me?

Thanks, Uncle Jonny Sock, you’re my only hope and may the mandrill force be with you.

PS: Please, don’t ask me for her number, you’d add her to your harem.

My poor little chum, you certainly are no Bonobo (sexicus rutticus). It does sound like you missed the boat here and will no doubt spend your time frenetically rowing to catch up in a dinghy on your own, but, maybe you narrowly avoided something that you would later regret.

Going on a date where the finale is spelled out from the beginning is as pointless as watching The Sixth Sense for a second time. The whole point of dates is the suspense and the verbal pugilism involved, if there is no inherent challenge the whole thing is as fruitful as fencing when one opponent has decided to use a wet sock rather than their foil. Let me explain this to you using an analogy that you will no doubt be able to relate to.

Dating a man/woman/monkey-eater is like auditioning for the X-factor.

The pre-date meeting where initial first impressions are made is the nationwide auditions, you’ve spent hours queuing (in bars and clubs) until you are given a minute to impress (which allows for the weeding out of potential serial killers) and advance to the next stage (the date).

Then (during the date) you progress through the show, just going through the motions with the same old tried and tested numbers, knowing full well that that no matter what you do the outcome is pre-destined so no thought nor effort needs to be put in.

And then it’s the end (post-coital cigarettes all round) and you’ve won or lost, it doesn’t really matter they got what they wanted and they will either keep you in tow till you’ve out-served your purpose or they’ll drop you straight away and be on to the next one.

In-keeping with this analogy, what you would be better off doing is singing your own little songs. You won’t become that mega-star for a year with a different fan every night, but, you will find that one fan that will follow you always.

So in summation my little chum: fornication for fun is just expensive exercise, meals and gifts and grooming and drinks all add up, so join a gym, it’s cheaper. The challenge is what you are after my friend, and when you have defeated the final boss on the final level you can contentedly sit back and admire a job well done.