(with apologies to everyone)

Let me tell you a little story

the story of a horrid pink tape

and all the lives it ruined.

Some say it’s what got The Stig fired

and that the pole shift will be because of it

all I know is that since I played it

I first gawked at it with mouth agape

At a little show at the Harley

Many a week passed until the skate holiday came

When the man with the golden voice gave me one

“What a strange thing?” I thought

While holding the strange, furry tape in my hand

Inside, a pink tape, a tracklist and an old photo

With a d4 and the head of a toy horse

Alas, none of my acquaintances had a tape player

Even my Scottish friends said no

As their beloved tape deck

by a bunch of Neds it got wrecked 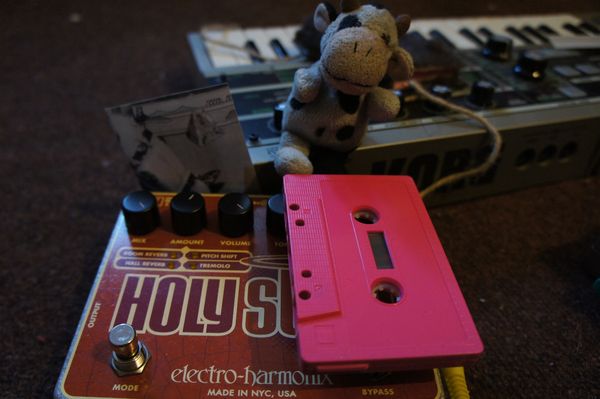 Soon it was time to go to sunny Mexico

Where technology stuck somewhere before the Falklands fell

I tried it in my dad’s Kenwood modular stereo

A monolith to trash it became afterward

And a fire I had to put out.

“Just my luck” I thought, after the smoke cleared

“Burning was the track missing in the mix”

Another stereo, an old Sony

In my brothers’ room waited patiently

Both were out and I sneaked in.

It was wrecked too, so I sneaked out.

Then my father’s car beckoned

A Toyota stereo, surely it can take it?

A screech, a squeak. Was it part of ‘Dreamboat’?

No, it was the sound of my doom.

An old walkman in my drawer waited

Do I really need to say what followed?

Spool the tape again, I did.

So it was back to England I went

When a friend from Cymru gave me a bell

I could run it through a stereo proper

It has survived tapes by Eddie Izzard

And so went the pink tape in a biohazard manila folder

To the lands of Wales and yonder

A few days later, an email was received

Digital copies from that jinxed cartridge

No names were attached, but the songs I enjoyed

The one with ‘Sparrows’ an earworm delivered

While the one about Satan tempted me into repeat

As dessert, I sailed a showboat into a sandbank.

And so ends the story of the horrid pink tape

But enrichened my music collection

And gave me another reason to press play.

Dad's rocks put to good use
Its been a long day
Melting hearts.
This week's #mic #decorations #colinbaker #legojoker and #stalker
#avedeparaiso #flowerstagram
"HEY WHAT explores rugged soundscapes of doom and salvation, intertwined into a brash performance that terrifies and soothes." My review of @lowtheband For @nowthenmag
Loading Comments...