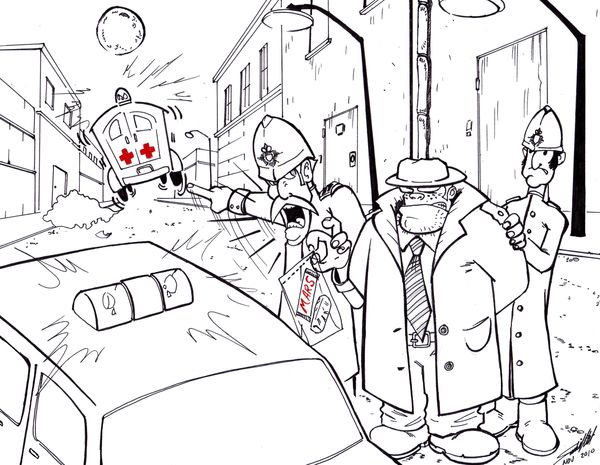 Russ sat with his feet up on the desk, smoking a cigar and swishing the ice cubes around his glass of Dr Pepper Zero. Business had been lax recently, and it seemed that being a part-time private detective was not delivering the excitement it promised.

He had only had one case so far.

Admittedly it was an exciting case, a grandma had been kidnapped, but it unfolded that it was his grandma, and she wasn’t kidnapped, she’d been left on a bus, by him. Just then a shapely silhouette appeared through his glass door and a gorgeous brunette burst in and chasséd towards him. Russ dipped the brim of his trilby and said;

Brown Fox rolled her eyes; “Oh no, not the detective shit again. You’re not a private dick, you are a often a dick in public but that’s about as close as you get.” Russ chuckled, he’d been married to Brown Fox for a while now and knew when she was joking with him.

“So have you got a case for me Brown Fox, or is this a social call?”.

He wasn’t giving up the private dick persona so she went along with it.

“Yeah, I’ve got you a case alright. There’s a shipment coming into Sheffield tonight and I want you to intercept it.”

Russ kicked his feet off the desk and stood. “Alright, now we’re talking. Where is it coming in, have you got some intel?”

She nodded. “Oh yeah, it’s a shipment of Grade A chocolate and wine and it will be docking at the Asda.” She threw a tenner at him; “And pick up some crisps as well, you moron.” Russ put on his trenchcoat and poked the brim of his trilby up; “A case is a case.” And he walked out onto the city streets.

He walked from streetlight to streetlight, it was late and the streets were his alone. He was excited to be back on the job. Then the hairs on his neck stood, as he realised that his were not the only footsteps he could hear. He was being followed, rather clumsily in his opinion (his grandma had no idea when he had crept up on her and cuffed her, although she is a bit deaf). Russ changed direction down a dark alley and still the footsteps pursued, he took one turn, then another and another till he felt a hand on his shoulder spinning him round. A pale, sweating man with bloodshot eyes held out a knife to his neck:

“Give me your wallet!”

Russ slowly placed his hands in his pocket and calmly produced his wallet, his exterior hiding the fact that his interior was messing itself. The mugger rifled through his wallet; “What are all these?” .

Inside the wallet was Brown Fox’s tenner and hundreds of plectrums. Russ peered in to his wallet; “Plectrums, err… I play guitar in a band.” The mugger looked impressed; “You any good?”

“Have a listen for yourself.” Russ produced his Ipod and put his band on, passing the earphones to the mugger who then motioned with the knife to pass over the whole Ipod.

“Shit!” Russ muttered under his breath.

“You’re not bad.” The mugger said, unplugging one earphone.

“Thanks.” Said Russ genuinely pleased, he may have lost an Ipod, but he might have gained a fan.

“Get on the floor.” The mugger motioned with the knife. Russ did so and the mugger ran away, turning the corner out of sight.

Russ, still sat on the pavement breathed heavily, thinking it could have been worse. This case was turning out to be more complex than he had envisaged. Just then the mugger ran past the end of the alley, and then a few seconds later back the other way until he returned to Russ and got the knife out again; “How do I get out of these alleys?”

Russ chuckled. “I know, it’s a right maze isn’t it. It depends on where you want to go really?” The mugger thought for a moment; “My car’s on Mickle Street.” Russ wasn’t sure where that was, but he had an idea; “Hang on, my phones got GPS on it.” He got it out and typed the details in and then handed it to the mugger as he motioned with the knife again. Russ cursed his stupidity. The mugger then frisked Russ’ pockets; “You haven’t got anything sugary have you, I’m diabetic you see and my blood sugar is a bit low.”

Russ shook his head; “Sorry, if you’d have mugged me on the way back from the shops I would have.” The mugger ran away again looking very shaky on his legs. Russ gave him five minutes not wanting to bump into him again.

On his way out of the alleys, Russ found the mugger collapsed on the floor, and barely conscious.

The mugger motioned him nearer with the knife; “I need sugar.” Russ thought quickly; “Right, give me my wallet back and I’ll run to the Asda and get you some.” The mugger weakly held out the knife.

“No!” Russ took the knife from his hands; “Look, I’ve got no money ‘cos you nicked it so I need it back to buy you sugar.” The mugger nodded and handed it over, Russ shook the knife at him; “And you might as well give me my phone and Ipod back as well, seen as I’m saving your life and all.” The mugger handed them over and Russ sprinted to the Asda. By the time he had returned, the Mugger was unconscious. Now, russ had bought a Mars Bar, but he wouldn’t be able to eat it what with him being out cold. Russ did the only thing he could do. Russ gave the mugger a Mars Bar suppository, and as he waited for the glucose to be absorbed through the bowel the Police arrived.

“Thank Christ you’re h…” Russ managed to get out before the policeman slammed him onto the police car.

“You degenerate scum, in all my years as a policeman I’ve never met a bastard like you before.” Russ was too shocked to speak, as the policeman berated him further;

“An old woman saw you mug this poor bloke as he lay collapsed on the floor, and that’s not enough is it? You then came back and raped him with a Mars Bar. I hope they hang you, you rotten twat.” Russ was going away for a long time. Case closed.