“I’m not being filmed, am I?” asks Clara (voice, keyboard) as the camera-passing-as-Dictaphone     is precariously balanced. “It’s filming but I’ll delete the footage”, assures them. “The video output is the size of my thumb”.

Sitting besides Clara are Stephanie (Drums) and Mike (Guitar). They are Just Handshakes (We’re British) and the atmosphere is cosy, maybe an 7 out of 10 in the scale of snuggles. On the sloucher.org side of spectrum it’s PM and Sam doing the third degree duty on the band.

Edward comes last as he was walkabouts, states his name to the camera and drolly asks “Is that the camera?” causing laughter from the other members. They are all comfortably sitting in a sofa at The Harley. They are a bit tired from playing, but still keen to give us some of their time…

Sam: So, let’s go for the most basic question: Why the name Just Handshakes (We’re British)?

Clara: It’s taken from an old British film called “No sex, please, we’re British”, we thought it was a good name!

Mike: Just kinda ad-libbed over that mood. The same type of idea but without the “sex” on the title.

Sam: Could you name of your influences as a band?

Edward: We like Swedish pop, mostly. That takes out all the things that you were going say (points at Clara).  Personally, my biggest influence is the Rough Trade records back catalogue.

Mike: We all have different, separate influences. From a guitar point of view, I like a lot of early Indie Pop stuff.

Edward: You are six months behind…

Mike: I like also early Neil Young, The Smiths. From a writing point of view, bands like Rilo Kiley.

Stephanie: Definitely influenced by two kinds of different worlds. A lot of London bands that played around when I was back home, like Bombay Bicycle club. Also techy electro stuff, synths and club stuff. Things like that. I also like that type of machine drumming, like early Bloc Party.

PM: how long have you been drumming for?

Stephanie: Since I was 14, so seven years, roughly. (laughs)

PM: Do you find a lot pressure as a female drummer?

Stephanie: I think it works both ways cause people expect less of you, but when you drum they are “wow, that was good” kinda of stuff. So if it’s good, they are impressed. And if you need help carrying heavy stuff they’ll be “Oh, I’ll help!” (laughs).

Sam: You had good drum rolls and fills.

Stephanie: Thanks! It’d be nice to have more female influences to beat that Meg White stereotype.

Sam: You can always spearhead the movement!

Sam: Last but not least, Clara, your influences?

Clara: Everybody has covered most of them. I really like a lot of synth-based stuff. Also all that Swedish pop!

PM: There’s a bit of twee in your set.

Clara: I guess. We don’t aim for that. Everybody mentions it and we’re getting really annoyed at it..

Clara: Only joking (laughs). I think it’s just the way I sing. I never understood so many people singing in an American accent, it’s something I always wondered “what’s the point?”. Be yourself. I like lots of British music and I pick up from that.

PM: Who does most of the song writing? Is it a communal thing?

Clara: At the moment, we all are living in different cities so it’s hard to get together. Mike starts writing, then I add my part, Steph add her part and then Ed.

Mike: As of June, for the first time since ever, we’ll be in the same city, except you (points funnily at Stephanie, laughs). Finished university, so we’ll have more time for writing.

Clara: Buy a big house and we can all live there!

PM: How did you form then?

Clara: I’m in Uni at Leeds, Mike in Manchester, Ed came to Leeds, then went to Sheffield and now back on Leeds  and Steph’s from York. She’s our new drummer, been with us a couple of weeks. Me and Mike met at college, we advertised for Ed and the we advertised for Steph! Advertises for all! (laughs).

Sam: How do you feel being a new drummer in an established band?

Stephanie: It’s nice because the previous things I’ve done were more as a backing band, but it’s really nice, as I knew all three by  being a promoter myself and I put them on 3 or 4 times. When they asked, I said “Yeah, sure”. Hopefully, I’ll fit in nicely!

Sam: About the singles “Paper cranes” and “Shipwrecks”, who had the idea for the packaging? I think it’s very artistic.

Clara: Thank you! It’s something we all did together, really.

Ed: It’s a really long boring story. We started with the “Operation daybreak” one ages ago. We had some recordings and we wanted to do a demo but we hated the fact that lots of demos  are just copied cds with something written on it in a plastic sleeve. We’ve all been given loads of them before and I don’t know what happened to them, they became coasters or dropped them. So we wanted something to stick out, but we didn’t want to spend any money on it. So we had some cases that we made from paper and double sided tape. We were selling them for a pound,  just to cover costs, and people were quite happy for it. I made this cases and Clara didn’t like them, so she puts a ribbon around them, so that’s how it started!

Clara: I worked on a chocolate shop so I got ribbons for free, it carried on from then! Loads and loads of ribbons from Belgium and it’s nice, they are like a vinyl 7”! Hopefully we will never become famous because we won’t be able to keep up!

Mike: The beauty of doing things in small numbers, small releases and all, is that you can keep with a DIY mentality, which we all are on about.

Clara: People appreciate them more, if you are taking your time on it.

Mike: Put it together yourself and stamp it yourself. You see work has gone into it and people might buy it then than instead if it was only printed off. If we do it in large numbers, it will be in an EP, when it comes together, we’ll amalgamate it with more mainstream stuff.

Clara: It’s a bit nostalgic. I’m more of a fan of going into an actual shop and getting a cd, not rather than getting it from iTunes and people missing all that package, about having that physical stuff in their hands.

Ed: I for one am happy of never having to fold or print or stick another one of the thing! It was about 900 in total, every single case had to be double sided taped, folded and printed. Oh! (groans)

Clara: So many hours were spent in my bedroom and I still find bits of paper and ribbon! (laughs) I think all of us are really not liking independent shops dying out.

Clara: There will always be a market for it.

Mike: Yeah, like the concept albums and stuff. Things like Bright Eyes, there will always be a band you can follow through. It’s really important to keep that going, because if it dies, we all lose. Music will become something that just pleases instantly.

Stephanie: There will always be that kind of underdog thing. When things get boring, people will be thinking of the past with decorum. Like “Yeah, oh remember that? First album!”, that sort of thing that puts people together will always be there.

Ed: The whole downloading thing is forcing people to put more effort into it. Filler tracks are starting to disappear. If  there’s a filler track and people are just downloading, they are not going to download that thing you put only to fill up the album time. Putting more pressure on bands to fill the album with potentially ten singles, really. The art of the album is dying, I say. We just got a car with a cassette player and one of the few tapes we have is Blur’s “Parklife” which has like three instrumental filler songs, which, if somebody is downloading it, they wouldn’t get to enjoy the fact that it’s got three little breaks with fairground sounding music. I think that’s a very sad thing, but at the same time is pushing people to write…

Clara: We never have enough money to record everything so we have to be quite careful of what we decide to do. We are never “let’s make this sort of thing?”, just do what works.

Sam: Any plans for an album?

Clara: We are recording an EP. It’s hard to do, it’s not a setback, but obviously we switched drummers and stuff, haven’t done anything for a little while so been writing a lot of new songs and trying them.

Ed: It’s been quite nice to have a few months of sitting back and not gigging. You rarely get a chance to look back in detail.  Because gigging all the time, whenever you practice, you just practice for the next show. When you take a little bit of a step back, it’s a lot easier to get things done. It should all come up eventually, err, later on  (knocks on wood). Again. (laughs).

Stephanie: Because we’ve been listening to a lot tapes recently in the car, there’s a new influence: Iron Maiden (all laugh). All their back catalogue, so that might turn us in a new direction.

Clara: That’s were we are heading!

Ed: If we do that, it would be my dream come true! That’d be amazing!

Stephanie: I do feel pressured to invest in a double bass drum!

Mike: Fifteen cymbals, nine rack toms, (looks at Stephanie) if we get a gong behind you…

PM: Thank you very much for your time!

So we leave the band to get some well deserved rest. I consider for a moment if I should get out a walkman from the attic and listen to some stuff from the first wave of British speed metal to write this up… 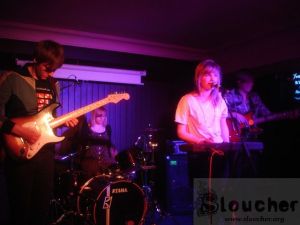 You can get their track “Brass Knuckles” from our free mix cd.

Their next gig is on May 28th, Brudenell Social Club, Leeds.

And now it's dispersed
Nasty thermal inversion keeping all the pollution near ground level.
Looming.
Mood.
Still in one piece. Thanks @nazlifashion
México mágico
Join 4,428 other subscribers