It’s 9AM on a Sunday morning, a time I’m not exactly familiar with (in fact I haven’t known of its existence for approximately four years) and I am being dragged out of bed and into the intrusive sunshine of Western Park by Sam. But there’s one problem – I am hideously late having switched my alarm off as soon as it buzzed me from unconsciousness, and I barely have time to make myself look less like a cadaver and more like a member of the human race, wolf down a bowl of stale Cheerios and leg it out into the big wide world.

I arrive, late, to three figures casually mulling around the shade of a tree – one is Sam, a poncho haphazardly thrown over one shoulder, and the other two are Russ and Daniel, the singer/guitarist and bassist (respectively) of the band we are here to interview, Sheffield band The Unfortunate Incident. But where’s the drummer, Tom? “He’s always late to everything” explains Russ with a laugh, “Even when we lie and tell him an earlier time!” About ten minutes later Tom arrives on a bike exuberantly gesturing and explaining the reason for his lateness (which was strikingly similar to my own). Eventually, we muster enough strength to start the interview…

Sloucher: Can you tell us a bit about how the band formed?

Russ: Well me and Daniel are brothers and we originally formed with another drummer and we couldn’t find a bass player so I begged Daniel to do it and he really didn’t want to…basically I moaned to our mum and mum made him do it! So then we got Tom in…
Tom: And I’m the brother from another mother now.
Russ: We’ve adopted him legally, he’s ours!

Sloucher: So you released your first album in 2009. It’s pretty eclectic sounding, was that purposeful or did it just turn out that way?

Daniel: Well, we’ve had a lot of those songs for ages
Russ: Yeah a lot of the louder, punkier stuff is from when I was in a band at school and then a lot of the newer stuff is from current influences. It was only supposed to be a ten song album but just at the last minute we had three more songs and they ended up being the three best tracks!
Tom: I think it’s strange that you think it sounds eclectic because that’s sort of our style anyway. As Russ is always telling everyone, we’ve all got terribly short attention spans so we have to just keep playing around and have fun as well and not just stick to one thing. You can have a lot of fun playing blues and country, folk, poppy stuff…it’s a good laugh. 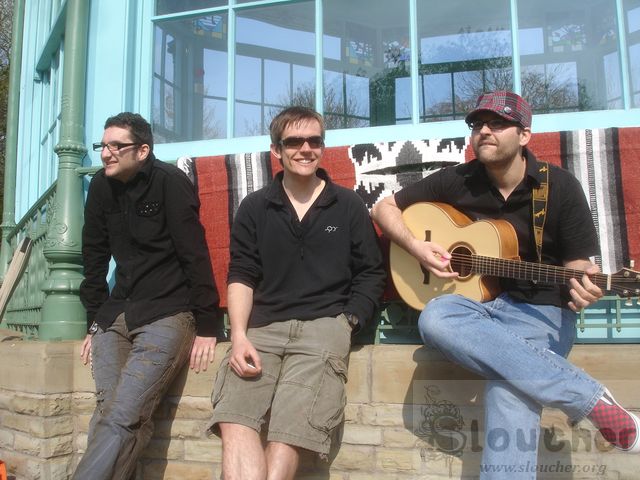 Sloucher: I think the album has lots of fun elements in it, it’s sort of pop-punky in parts and sounds quite upbeat, but the lyrical content actually seems quite serious in these songs.

Russ: Yeah, we made a conscious effort that I write incredibly, terribly depressing lyrics and then Tom wrote one of the lyrics on the album that was possibly…it was like a depress-off weren’t it? So if we put those lyrics over the top of incredibly slow, depressing music it would just be too much.
Tom: You wouldn’t be able to deal with it!

Sloucher: So how long have you guys been gigging in Sheffield?

Daniel: Since August 2008
Russ: And that was with our old drummer and he lasted about three months because he didn’t want to play anywhere. So then we got Tom and he would play anywhere, he’d play a barn, so we thought ‘Yeah, he’ll be alright’
Tom: Play someone’s front living room…I’d play anywhere.

Russ: Two of us are!
Daniel: Yeah, I don’t move very much
Tom: Dan’s too cool to move!
Daniel: I’m trying to concentrate
Russ: But Tom will try and destroy the kit
Tom: I basically try and break anything that gets in my way when I’m onstage but fortunately it usually is the drum kit so I just smash it to bits…

Sloucher: So you get into the Keith Moon mindset then?

Tom: Uh, not really because I don’t like pills that much…and I don’t drink before I go on. It’s kinda weird, you just sit down and go for it, just have as much fun as you can and to me that just involves going a bit psycho so…
Russ: We’ve realised that we’re not, you know, a ‘cool’ looking band so it kind of allows you to be a bit goofy
Tom: I don’t have to worry about sweating through my little Topman shirt and tight trousers…

Sloucher: You played Tramlines last year, how was that?

Daniel: It was good fun yeah
Tom: It was mental…
Russ: Yeah, it was at the Green Room and they didn’t have a stage or anything so there is nothing to separate you from the crowd so you could kind of touch people…they didn’t like it when you did. But yeah it was alright…I fell over at the end and that was quite embarrassing.

Sloucher: Was that through drunkenness or over-exuberance?

Russ: Me and Dan don’t drink. We’re the most un-rock and roll band in the world! Don’t drink, don’t smoke, vegetarian…

Sloucher: We’re sure you’ve done some rock and roll things, there’s got to be some juicy gossip in there somewhere…

Tom: (points at Russ) He ate a full pack of biscuits once

Russ: Rich Tea…
Daniel: we stole stuff from the dressing room once, we can’t say which venue obviously or they’ll never have us back…we stole all the food and cutlery
Russ: Yeah, nice cutlery…’Oh that’s a lovely knife and fork!’

Sloucher: So can you tell us a bit about the band competition you’re in at the Raynor Lounge? What other bands did you play against?

Tom: We played against a band called Marathon, some guys called King Capisce and Tilt were the last band. King Capisce were amazing. Very good, very talented guys and yeah we really enjoyed that and fortunately we won it. We really loved it and now we’re in the finals, wahey!
Russ: Yeah it should be good. It’s on the 29th April.

Sloucher: How do you feel about the local music scene here in Sheffield? Are you friends with any local bands or does it all seem a bit homogenous to you?

Russ: Err…we’re friends with a few
Tom: I think we’re just kind of ‘nothinged’ by many bands. I don’t think a lot of people dislike us, I just think they don’t really give a toss.
Russ: Well, we don’t drink in the right pubs and we don’t hang out with the right people. We lose out quite a lot from not being ‘in the scene’. Also we’re about ten years older than a lot of them anyway
Tom: Well, speak for yourself mate!

Sloucher: What are your favourite new albums at the moment?

Russ: Johnny Cash’s new album, that was pretty good
Daniel: Really, we’re on the cutting-edge, got our finger on the pulse…
Russ: Johnny Cash’s ‘Two weeks to live’ album, he really should have called it that or ‘The intensive care album’…he sounds half dead on it! You can virtually hear like, “Don’t waste too many breaths on this song as you wanna get all the songs done”!
Tom: Actually at the moment I am listening to Dan le Sac vs. Scroobius Pip’s new album and I like them because they are quirky. It’s completely off-kilter with what we do but I still love it anyway.

Sloucher: So what’s coming up for the band in the future?

Daniel: We’re playing the Academy
Tom: We’ve got the band competition and we’ll probably finish recording the new single for when we get back (from holiday)

Sloucher: What’s the new single going to be?

Tom: The single is going to be called ‘Fool’ and we just made a video

Russ: Yeah there’s a competition in Sheffield called ‘Two Weeks to Make It’ and they team you up with a filmmaker to make a new video and we filmed that the other week. It was fun. Sam was in it[…]A starring role!

Sloucher: Hmm, kept that one quiet Sam. So what is the video like and how was the filmmaker you were teamed up with?

Russ: Yeah he was cool. He wore a general’s helmet the entire time, it was wicked. I always wanted to be on a film where the director wears a helmet the whole time. My girlfriend Hayley made big papier-mâché head versions of us and we basically played the songs with the heads on and other people came and played us with the heads on.

Sloucher: Will the video be up on your MySpace page?

Tom: Yeah it’ll go everywhere – we’ll encrypt it into every single part of the internet.
Russ: Tag every single person on Facebook in it…

Sloucher: Sam? Anything you want to add?
Sam: Do you guys think the ‘album experience’ is alive or dead right now? And do you think it could come back if it’s dead?

Russ: Yeah they are pretty much, they are dead
Tom: They’re just promotional tools for gigs now aren’t they?
Russ: It just means that all music is going to go more towards pop music, everyone will just have ‘one single’ and a lot of good tracks aren’t going to be recorded because they are not ‘single-worthy’.

Tom: I think it’s just a shame as well, because albums used to be projects. If you look at what Pink Floyd did for the album and what the Beatles did for the album, even bands nowadays like one of my favourite bands, Coheed & Cambria, and the art work is beautiful, all the effort they put into the art work and making an album – all that is just going to disappear, it’s on it’s way out, unless something drastically changes.
Daniel: We’d be pretty much fucked if albums went out the window as our songs could make no sense if they were just singles. With singles you got to have a formula, you’ve got to have a sound and all our songs are completely different. So we’re really starting a band a completely the wrong time!
Russ: Worst possible!
Tom: But we’ll still be making albums – an epic, triple-layered album!
Russ: We know we’re not popular so it doesn’t matter
Tom: It takes the burden off, being an unknown band!

Whilst chatting with the band it’s evident that they think of themselves as the underdogs, outsiders, casualties of an underappreciated local music scene. But two things do become clear to me, the first is that they love Sheffield (Russ has a Made in Sheffield tattoo on his arm) and the second is that they just want to play music, no falsities or ego, they simply want to play music as much, as hard and as loud as possible. Sounds good to me anyway.

Links for The Unfortunate Incident

If you’d like a free song by them, get our mix cd, it’s free and it’s hellacool!

Take a gander at the photoshoot that day (now with more sarapes and bandanna).