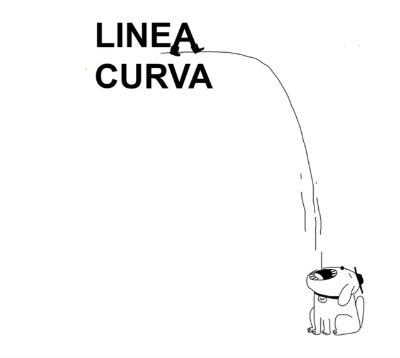 Music and Literature. Always a good mix, like a root beer float on a warm, arid day. A plethora of songs have been written about characters, books, and authors. Conversely, several books tap into the music zeitgeist for inspiration, epigraphs, and street cred.

Now, a book and an album dovetailed as a single product? That’s a rare species and Línea / Curva, the second book by Luis Membrillo, lives in this interspace. Happily navelgazing prose that swims in a low lit creek of riffs and chords, courtesy of Caós del Té’s Marcos Hassan. The closest we have seen in this Shithole of a Website (TM) is R.B. Russell‘s Ghosts (our review) and that was a soundtrack to a book, not a joint venture intertwining music and spoken word.

So, what is Línea / Curva and what makes it an endemic species to a chaotic melting pot like Mexico City? Luis Membrillo has mentioned that his prose is open to interpretation and after a couple of reads, Línea / Curva is a mix of yearning and remembrance. A stream of consciousness approach to vicissitudes of life, where key phrases rise with distorted guitars.

Songs can range for a sparse runtime clocking in seconds, to full-fledged tracks. One of the best songs in Línea / Curva is ‘No me gusta el futbol’, which marries an ominous guitar drone to an incensed argument that exponentially increases its rage. It’s an intense track and stands out when being surrounded by cool-headed tracks like ‘Un Compás’ y ‘De Tono’. There’s a return to fiercer sounds in tracks like ‘El Muerto’, ‘Funeral de una mosca’ and ‘Golpe Seco’, tracks that sport concise running times. Hey, if there are six word stories, why not songs with a shelf-life of 13 seconds?

‘Un miércoles’ is another interesting track. There’s a clear yearning for a memory that seems sweet at first, but unravels as it progresses, twisting emotions and expectactions by the end. This happens too in ‘Chica Bob Dylan’, which sells the idea of a sort of Manic Pixie Dream Girl but with a Shyamalan-grade twist. As a contrast, ‘Un compás’ offers a nicer ending. Both tracks benefit from an intimate approach to its musical composition.

Not all stories from Línea / Curva have a song attached to it. ‘Vividor’ is a darkly comical look at all self-proclaimed poets. ‘Niño del tambor’, a parody of an overplayed Christmas staple, drowns under scribblings that express what some of us feel about that season. ‘El pan’ is a quick intervention with the vessel of a staple of the Mexican diet. What does it all mean? Whatever you want it to. Without a song attached to it, these three pieces live and die by themselves.

Is there a future for stuff like this? I sure hope so. Heck, add a full band, and you could try an emote William Shatner & Ben Folds‘ masterpiece, Has been. Let time and tide continue to wash and erode the lives of Membrillo and Hassan and they might just release another slice of music and spoken word loveliness.

Línea / Curva is out on Tuna Roja Editorial