This review really shouldn’t exist. I mean this. After Corona Capital, I was pretty much over festivals but the siren call of Low was heed. The rest of the line-up was scrumptious. No excuses to stay indoors, not even the lure of Frank Underwood‘s Shakespearean antics.

A peaceful drive through the leafy Calle 10 bode well. All fears of another horde of The Thin and The Trendy (TM) overcrowding the festival while kvetching for drugs dispelled once the ticket checkpoint was passed. Under the scorching sun of Mexico’s weird ass March, the first act to catch was Coiffeur, a group performing under a cool white tent while the vivacious crowd of revellers began to burn the calories away. 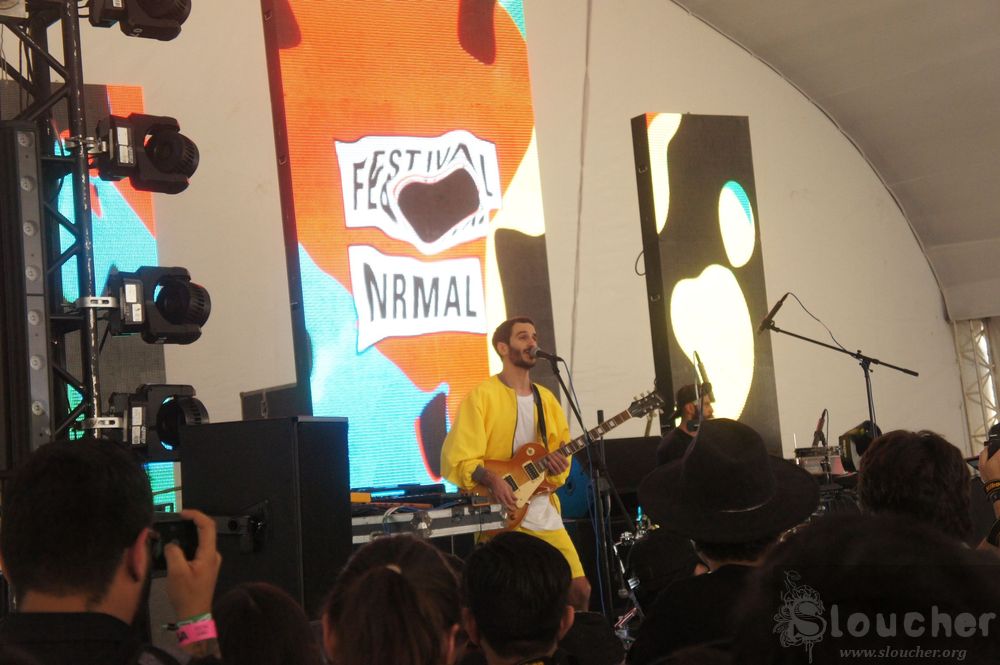 It figures that this Argentinian band would be on the opposite stage to the one occupied by the German band Aloa Input. I guess the scars from World Cup ’90 are still infested by many a scarf wearing giardia. But let’s leave amateur jokes about football; it’s the music what we want to focus on. Coiffeur mixed pop folk with electronics and satisfied the ones looking for a lifting moment. Aloa Moment interlocks with that ’06 sound developed by Editors and Bloc Party, fanning the audience with jangly tunes to keep the spirits up. 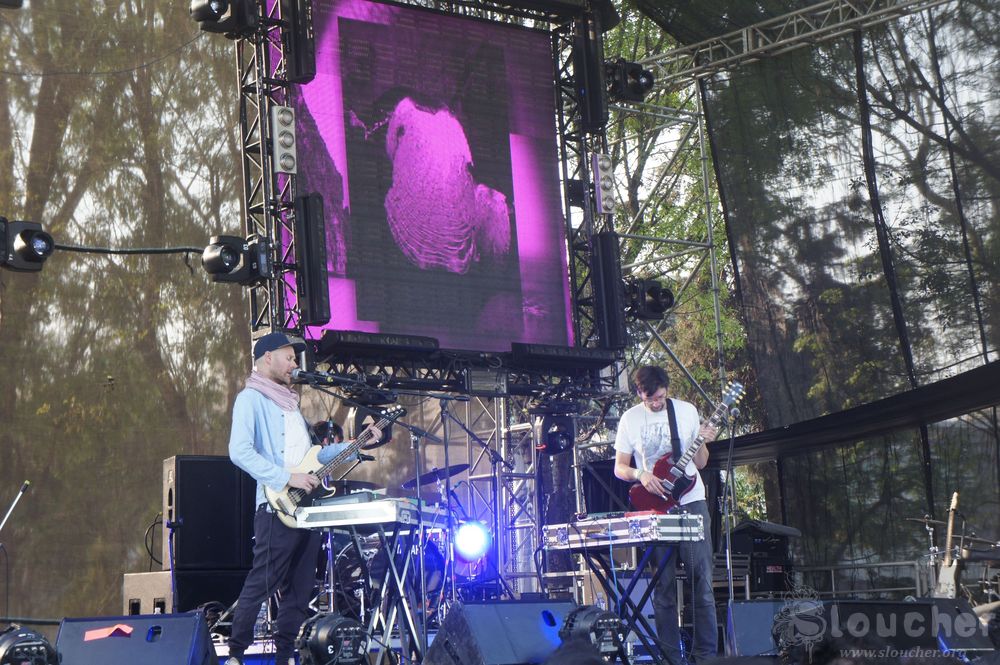 There isn’t much I can say about Low that I haven’t said before. It’s that delicate nature of its primal anger what always makes a set by them memorable. The slow burn, the shushed lyrics, the angular approach to fear and anger, it’s always there, as palpable as when you listen to their music while driving a dark road. ‘Monkey’ gets simplified without losing its grit, ‘Laser Beam’ still is a dark lullaby that soothes the soul. So many classic songs, mixed wisely with recent winners like ‘No Comprende’ and ‘Paper cup’. The set list was an impressive tour through their history. Not even the sound problems at the beginning, deftly assuaged with ‘Death of a salesman’ could stop them.

Low are a beautiful example that you don’t really need distortion to make a racket. Mimi‘s dulcimer vocals are heavily guarded by the spare drums. Steve Garrington‘s bass clenches to the ground fiercely. Alan Sparhawk always knows hot to be as aggressive as a honey badger while still coming off as re-assuring, like in the heart-wrenching rendition of ‘Murderer’, a song that sticks to you like a waking nightmare that both horrifies and intrigues you.

An emotional climax was reached with ‘Pissing’, an obliterating song that sent shivers down my spine so strong I collapsed. When I woke up, the world was a beautiful place and I was no longer scared of dying. Politicians buggered off to Neptune and we were in a kind world with no wars, good food and a cleaner environment.

And then I woke up to the Cumbia like sounds from Los Pirañas, who fuelled the suicidal tendencies of many a millenial and generation y-er who jumped from the seemingly random stunt mattress carefully placed next to the Goose Island bar. To the scream of “I CAN FLY // LIKE MOTHERFUCKING PETER PAN!” a friend of mine jumped, never to be seen again. So it goes. A quiet, slightly distorted and reverberated libation with a cool glass of Goose Island IPA was had in his memory.

I can’t remember anything from San Pedro El Cortez. I heard that another band killed them, skinned them and wore their flesh, playing an aggressive mix of hardcore and punk. Many a banner were flown and thrown into the audience, were the rabid orcs moshing and pogoing tore them apart. 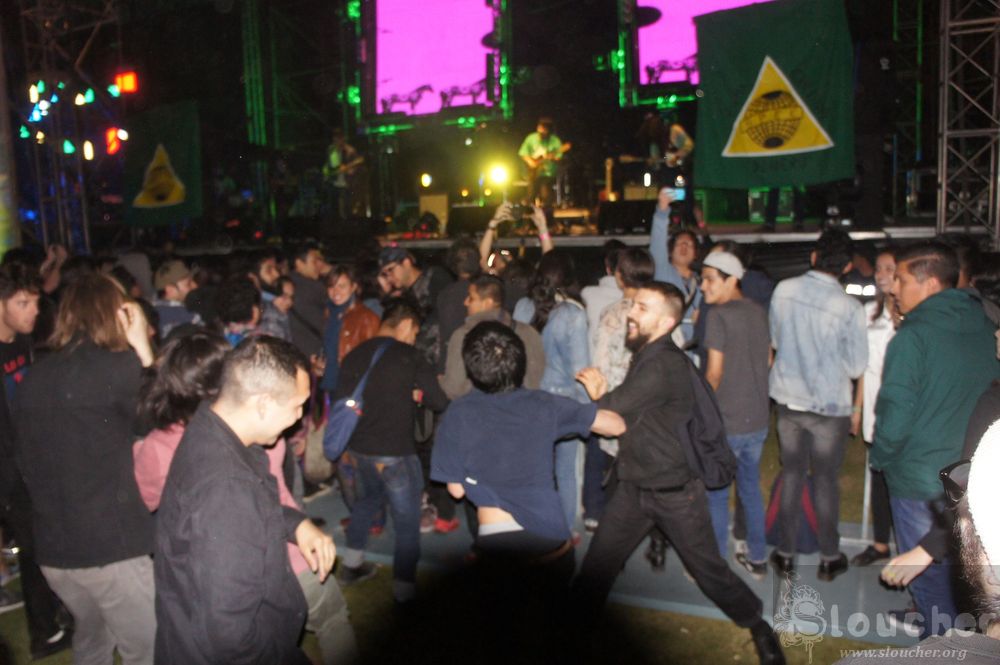 Then, a giant cup full of Passport Scotch was passed around. People spat and drank from the collective booze, each one gaining a momentary boost in strength and mouth bacteria. Was this band for real or was it a strange hallucination imbued by the dank, contaminated Mexico City air? You decide.

Follakzoid and Empress Of were an interesting clash. The brooding, droney nature of Follakzoid’s dark electrofolk swirled with Empress Of kaleidoscopic splashes to create this kind of ciaroscuro contrast that would marvel anyone caught between the two stages. Yes, us fidgety ones trying to catch two bands at the same time ended up getting this mash up of contrasting (in mood, not style) artists. If you fancy the darker palette of electronica, go for Follakzoid. If you want a vivacious iteration of Glasser, Empress Of should hit the spot.

Deerhunter. Whoa. Like many of my current obsessions, I fell down the Deerhunter rabbit hole because of Saints Row 2‘s perfect soundtrack. Sure, they never played ‘Hazel Street’, but why would I complain about the lack of that gem when they obliterated us with a mammoth version of ‘Octet’? It’s a wild beast that will tear you apart with its drenching atmospheres, build ups and extended lifespan. It was a truly mesmerising slice of reverberated chaos.

And chaos was what we endured. We needed it. It prepared us for that brutal set by A place to bury strangers. Forever I dreamt of seeing them live in a small venue, losing my mind and self-control to their manic creations. Fuck that wish, they are of the noisiest, fiercest bands I’ve witnessed in my life, small venue or not. The utter madness, the stroboscopic flashes, those manic bass lines moves and that guitar that gave its life for our entertainment. For 50 minutes or so, we were in the dark, with muzzle flashes signalling that our emotions were being sniped by killers with machine-like precision. A place to bury strangers made a snuff film and were the slain bystanders. 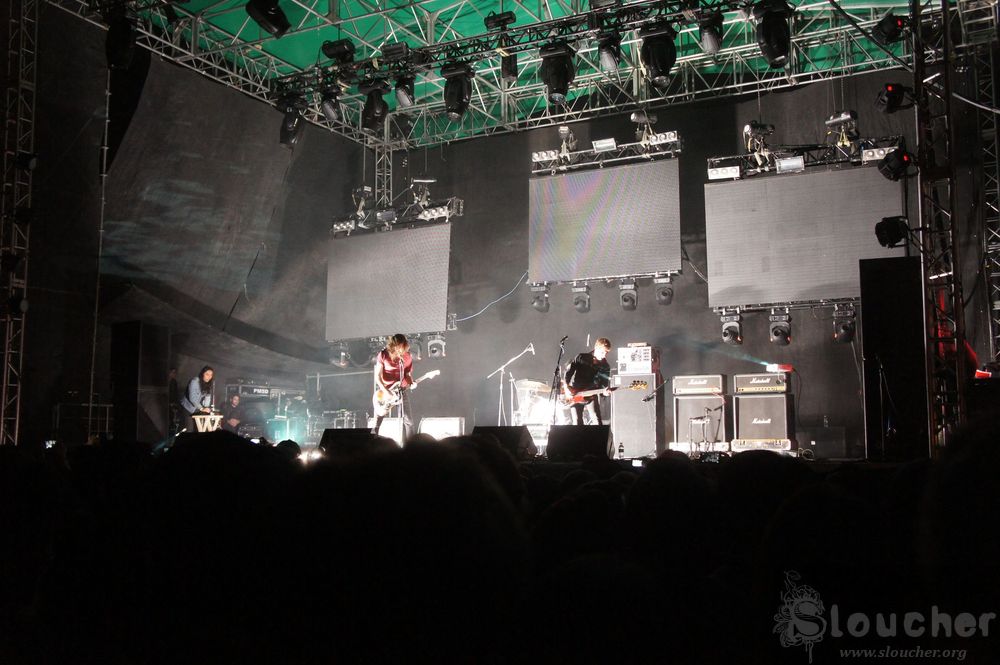 Health made the place tremble, resurrecting the myriad carcasses strewn by A place to bury strangers. We resurrected in three minutes and danced as the harshest pop melodies were whittled down for our music-consuming pleasure.

-Bless you Waze for finding a shorter route from my house to the venue. And fuck you for sending me through a weird street full of meth clinics and street fights to send me back packing.

-What’s with this couple chatting their romantic intentions backstage during A place to bury strangers? WE ARE WITNESSING ARMAGEDDON, YOU ARE THINKING ABOUT LOVE? FUCK THAT.

LOOKING FOR LOVE DURING A PLACE TO BURY STRANGERS RECORDS.

-Food. I don’t get this fascination with food trucks. However, it’s a good alternative that flies away from Domino’s minipizzas, cup o’noodles and shit beer.

-“Shit Beer” would be a great name for a band that opens Bahidorá.

-Goose island – please sponsor me. I have no integrity but can write a good sentence when needed.

-“Why haven’t they played that crazy prog song?” “Which one?” “The cauda venenum one. The one that sounds like Mars Volta with less squealing!” “You big pendejo! That’s Dear Hunter, we are watching Deerhunter!” “Oh….”. #TrueStory #Shityouhearinafestival #DamnJunkiesMUSTDIE

-#DamnJunkiesMUSTDIE would be a great name for a band that opens Corona Capital.

-PROTIP: use the toilets farthest from the venue. Semi-clean and empty.

-On a high contrast to the desolation that was Corona Capital last year, the “fits like a glove” nature of Nrmal‘s venue predicted the right amount of music junkies and musos to be served. Not one missing, not one spilling over the dusty brim.

-No, this post wasn’t sponsored by Goose Island. And yes, their IPA is great.